McAdoo on that crash plus Tomac on fifth 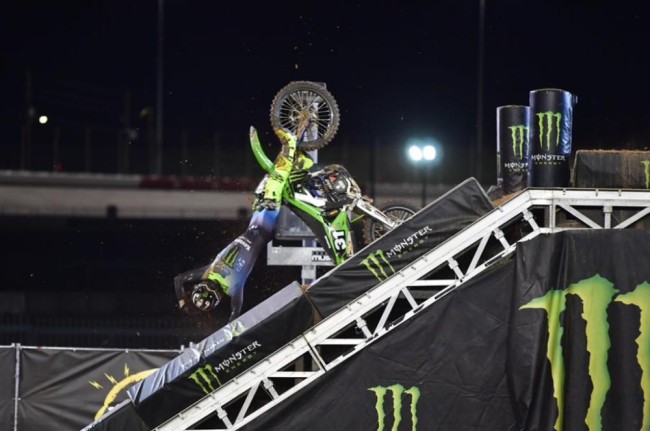 Foothill Ranch, Calif. (April 14, 2021) – Round 14 of the Monster Energy® AMA Supercross, an FIM World Championship saw Monster Energy/Pro Circuit/Kawasaki rider Cameron McAdoo put together a lionhearted performance to finish on the podium in the 250SX Main Event on Tuesday. McAdoo overcame a vicious crash early in the main event to finish in third place, while his teammate Seth Hammaker finished in ninth place. In the 450SX class, defending series champion Eli Tomac fought hard from a mid-pack start to finish the race in fifth place.

Cameron McAdoo: “That crash was a scary moment for me. I struggled to move my leg for a moment and didn’t expect the medical staff to continue letting me ride, but I wasn’t going to give up. We’re in the middle of a heated battle for the 250SX Western Regional Championship, and I’m going to give it my all until the very last lap. Once I got the okay from the Alpinestars medical team, I refocused on the goal at hand and tried to salvage as many championship points as possible. I’m happy with the third tonight, especially considering how hard I crashed, but now it’s time to rest up and recover as much as possible before we run again on Saturday.”

Eli Tomac: “I got a decent start aboard my KX450 during the main event but had to check up before a few turns because of all the chaos going on around me. I tried avoiding as many riders as possible, and that forced me to take a different line in the whoops section, which slowed me down even more and allowed others to get around. I worked hard to get into fifth place, but the track was so demanding that by then, it was already too late, and I ran out of time. It’s not the result I was expecting, but we managed a top-5 finish, so we’ll take it and now shift our focus on how we can improve for Saturday.”

Seth Hammaker: “I had an okay day today. My bike was feeling great, but I couldn’t find my flow out there all day, and in the end, that cost me. Having to go through the LCQ to qualify took up a good amount of energy before the main event even started, but I pushed as hard as I could for as long as possible and came out with a ninth-place finish. I’m going to take this as a learning experience and head into Saturday’s race refreshed, refocused and ready to battle with the top guys.”