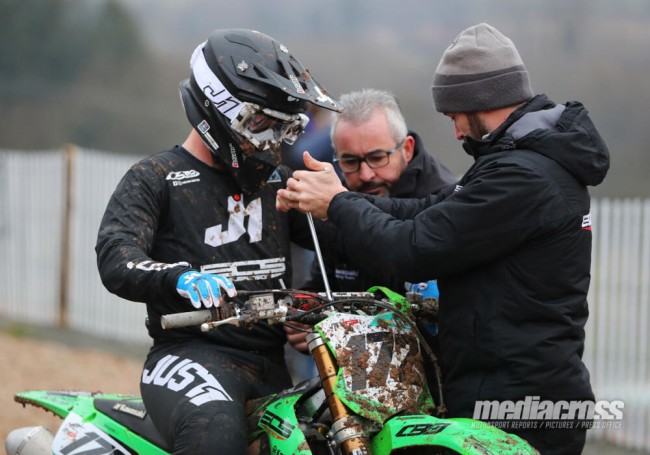 Before the opening round of the MXGP World Championship at Matterley Basin, Mathys Boisrame had a very last minute opportunity to ride a Factory KTM. However, the French talent unfortunately crashed out picking up an injury.

Boisrame has posted the following statement regarding his current situation – it looks like we will see him race MXGP when he’s back up to full speed. If he doesn’t secure a factory fill in ride then he will do some rounds with BOS Kawasaki.

Many of you ask me for news, so here is an update on my situation at the moment. After my acromioclavicular fracture during the MXGP of England, and despite a significant displacement, the doctors considered that surgery was not necessary and that several weeks of rest would be sufficient.

5 weeks after my fall The French Elite championship arriving at home at my Romagné club, it was an opportunity to resume competition. Even though I knew I was missing riding, I wasn’t going there for the podium but rather for a gradual recovery towards a return to GP, which remains my medium-term objective. Unfortunately, after a few laps the pain came back and increasingly, which ended up disturbing me by telling myself that maybe I was aggravating my injury or at least delaying its healing, so I preferred to give up as a precaution so as not to compromise the rest of the season.

After consultation, it turns out that my consolidation is slightly slower than normal, but still on the right track, prudent doctors advise me to wait a few more weeks.

Knowing that my CBO and BOS partners are super accommodating and comprehensive, they put no pressure on me to return by confirming that my health is a priority. Behind these companies there are people with big hearts. I take this opportunity to thank Sébastien Dupond of CBO, here is a dealer who does not hesitate to get involved without counting, and I hope very soon to be able to return the favor to him. Finally, Olivier and Steven Bossard with whom I was able to work this winter and develop amazing suspensions thanks to the involvement of their entire team of engineers.

At the end of last season I had the opportunity to ride the factory Kawasaki KRT with the Showa full factory package, then I moved on to the KXF CBO with the BOS package, to then ride for several weeks with the KTM of Jeffrey Herlings equipped with the pinnacle of WP, so I was able to have the (very rare) privilege of comparing what is best in terms of suspensions. I felt at BOS the experience of the MXGP, Every detail brings a real benefit to the performance.

How lucky to have in France a manufacturer of suspensions of the best world level, thank you and congratulations to them.

See you guys soon at the track – Mathys