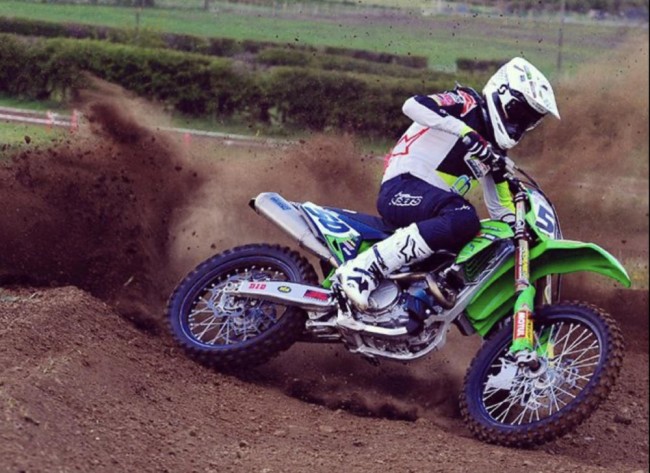 A convoluted off-season with Covid restrictions, bike changes and becoming a dad has left Martin Barr spinning a lot of plates, but he has navigated a way through it all and is primed and ready for the 2021 British championship on the Delkevic racing by BRT 450 Kawasaki.

We caught up with the Northern Irishman as he drove down through England for the British championship opener at Culham, and he’s excited to finally get racing again on Sunday.

Can you give us a rundown of your winter? It was a bit hit and miss with what the team was going to be and if you were on a Honda then ended up on Kawasaki. What happened there and how are you feeling on the new bike?

Obviously at the end of last year I was unfortunately left with nothing after KTM pulled their support with the lack of bikes that was available. So myself and Matt Smith from MXR we got talking and we kind of decided we would join forces and go that way and we were on Hondas. But unfortunately that didn’t work out and we split, just mutual agreement , it didn’t feel right.

Luckily enough I already had Delkevic already on-board as title sponsor and DK Off-road came on and really stepped up their level of support with Kawasakis. Everything has worked out for the best and I am really, really enjoying the new Kawasaki since the last time I rode them they have came on really, really good, Delkevic racing by BRT, running the Kawasaki, it has been really good. Obviously the late change hasn’t been so good with everything being last minute and just the way everything is product wise, everything a lot slower coming through than it usually is just with the pandemic and getting materials and what have you, so it has been a bit more stress just to get things organized.

But we are going racing. The first round this weekend, I am really excited to get going. I have had a few weeks on the Kawasaki now and felt comfortable on it straight away, my dad has done a super job with the engine, Scott Gardiner with the suspension so I’m really feeling at home on it. In saying that, this is first time ever in my career I’ve not have a race under my belt before the British championship so I haven’t raced since September/October but fortunately there is a lot of people in the same boat. I’m looking forward to it, I have raced for so many years now, hopefully we will go and get a decent weekend in, build on that and go forward from there.

Have you much bike time, even on the Honda with lockdown or has it been more the last six weeks?

I had a little bit of riding on the Honda, nothing serious, just with lockdown it was hard to get going. Fortunately I had my own track but once the Kawasaki came I really knuckled down and we tried our best with the time we have had to get going. I feel as if I am in a good place. Running my own team has been added pressure on myself to try and get everything organized and everything has been falling into place. Now it’s time to go racing and hopefully we can put the Delkevic racing by BRT Kawasaki up in the mix and push for race wins and podiums and see where we are at.

The new Kawasaki got good reviews in the tests and shootouts, did feel it was good even standard?

Yeah when I first put my leg over it I couldn’t believe how good it was in standard form. Handling wise and engine wise everything felt really nice, so it was a good platform to go forward with it and make it my own bike. We have got quite a lot down in a short space of time, other teams have had a lot longer but I’m excited to go racing and hopefully get some good solid results. By all means it’s not going to be easy, when you look down the entry list, the amount of good riders there and that can win races, it’s definitely going to be tough. It’s the toughest I have seen in a long, long time. It’s a good time to go out and get some good results and show people that I have still got it. Obviously last year, I finished the season on a high with the win at Fatcats and good group of lads there too, so yeah, I’m excited to get racing again.

Winning at the end of the year and being a dad now, does that all give you extra motivation coming into this season?

Yeah, it worked out really good with the delay of the season, it has given me a lot more time at home with the twins, they have just reached six months there on Monday so it’s crazy how fast that has actually went. Myself and my wife we were talking about and we wondered what we did with out time before the twins arrived. It definitely gives me a lot more motivation to go out and succeed for them guys and hopefully I can go out and do that.

Have you had to adjust your riding schedule or training to fit in with their schedule?

Not so bad, it is busy with the two them of them but it’s been really good, they have been sleeping really well from two months so it hasn’t been so bad that way. It’s just been sometimes I go off practicing and I’ve left her on her own with two babies to feed, you do feel guilty at times! But fortunately she understands I’ve to do the training and racing.

There has been days when I have been absolutely knackered and had to miss a training session or not go riding. Obviously I am trying to run a team, trying to do my preparation as a professional rider training and practicing and I have my own track as well, Area 50, that I have been trying to get sorted when for when we can open the tracks back home. So it has definitely been a busy schedule and I just need to watch I don’t overdo it. I have been balancing it not too bad, I feel really good fitness-wise, mentally and on the bike. I just can’t wait to get back behind the gate again.

There are quite a lot of Irish riders in the 450 class, which is a good thing to see, but I’m sure you still want to be the top Irishman over there!

Yeah for sure. it’s really good to see a good group of people out on the start line in the British championship. It’s not going to be easy with the level of riders there but i still want to go out and give it my best shot and see how we get on. I’m 33 years of age now, I have been doing it now professionally since I was 16. That’s 16/17 years at this level, I bounce as well as I used to and all the rest of it but i still feel I can go out and give it my all and be competitive. For sure there is going to someday somebody will step up but as long as I still feel i have the motivation to still do my training and my practicing, there is no reason why I still can’t be out there among the top dogs in the British MX1 championship.

Have you any specific goals at the first round or throughout the season you are trying to accomplish or just give it everything you have?

Yeah, just give it everything I have. I am still chasing that British championship, I know it’s not going to be an easy feat with the riders there but I’m human like everyone else. I will be going out and giving it my best shot. I don’t want to make up the numbers, I want to try and fight for podiums week-in, week-out, if not be as close to them if possible and try and get the odd race win.

This weekend…you can practice all day long but you never know where you are at until you are in a race situation. It’s going to be difficult, as I said, it’s going to be my first year racing a British championship without having a race under my belt. But I have a lot of experience, so just get through this weekend and hopefully two solid results and then I’ll know where I need to go to from then.

Jake Nicholls (injured) won’t be racing this weekend, does that highlight the need to be consistent as well and not goo too hard on your off days or at the first round? Is it a warning for everyone else?

Every time we swing a leg over the bike we give 100% so when we crash it’s going to be a big one. But in a race situation with the level of riders now you can’t really go out and take it steady at round one. If you go out and have two tenths and somebody goes 1-1, then it’s a lot of points to try and gain back straight away so you do need to be on your A game straight away. It’s important to be in top half dozen to have a chance of being consistent keep pushing forward.

The championship is live online this season, are you looking forward to that? It gives your team a chance for some extra exposure and the whole British championship. ( Go here to sign up and watch the races.)

It’s a good move. The MX Nationals did it last year and it worked very well. Hopefully the British will be just as good as coverage but saying that, you know yourself, any time it’s on TV they follow the leaders, so I have to make sure I’m up at the front of the pack to get a mention and be seen. But definitely from a team perspective it’s good for sponsors and to bring new sponsors on-board. Hopefully it’s a move where British motocross can go forward again and back to the days when sponsorship was a lot easier to come by.

Have you any plans to do local races if it’s on?

If it’s on and I have a weekend off then, yeah, there’s a possibility. I just have to wait and see how it’s panning out and what position I am in and stuff. Hopefully the race dates back home will be out shortly. With it being a shorter season but still trying to get all the rounds in it’s going to be a lot of busy weekends back and forth but never say never.

And the British Grand Prix, is that a possibility this year or an GPs?

I would love to go and do another Grand Prix but again it’s the financial side of things with the entry fee and all the rest of it. And also seeing where I am at, once we get this race over this weekend. The world championship you have to be on your game, there is nowhere to hide out there. Them guys are on a different level at the minute. To go out there and ride at the back, I wouldn’t have any interest at all, you need to be in the points and if we are scoring points you are doing well because it is so competitive now. I don’t think a lot of people understand that pace and how good it is to just score a point but we will see how things go.