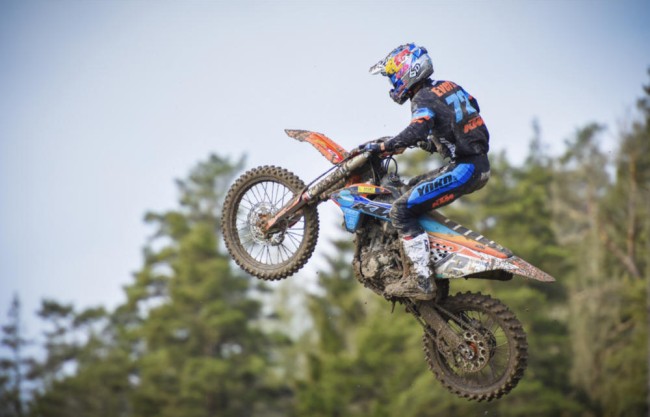 One of the big stories of the weekend was the speed of Liam Everts in Sweden. The Belgian youngster, who will be racing his first full year in EMX250 in 2021, was coming off a tough race in the British opener at Culham but at Uddevalla Everts gave everyone a glimpse of his potential.

Everts was on the pace of the GP riders there and it was a fast pace too, with de Wolf, Hofer, Gifting, Langenfelder and Beaton all behind the gate. Yet Everts held his own and took third overall going 4-2 on Saturday, then came from last after a first corner crash to seventh in race one on Sunday backed up by a fourth, despite a slip-off when he was running the pace of the top three, in race two.

This will no doubt be a huge confidence booster, Everts of course has pressure from his name, but that performance legitimatizes his own potential in his own right regardless of his surname. He now knows where his talent level is and he knows he can produce the pace when he’s given the opportunity against the factory level MX2 riders.

“It was nice to race the MX2 class and getting a podium was nice,” Liam told us on his impressive weekend in Sweden. “We keep working and preparing for the EMX season and for Lyng it’s just have fun and give my all to gain experience.”

Experience of course is something Everts doesn’t have as much of compared to other riders of his age. While Liam rode when he was younger he didn’t race much until he was a bit older and has only been in EMX on a big bike for a couple of seasons. Speaking to Stefan last year at Hawkstone the ten time world champion acknowledged Liam needed more time to develop. “He did a bit of the 65s, then two years 85s then last year his first year in European on the 125.I have noticed that since his childhood, he needs to have his time to grow. Some kids they are 15 and they are incredible. We need to give him time, when he gets to 18 we will see more the best of him.”

But right now, despite that wrist injury last year when was contending for the EMX125 title, the improvement over the last 18 months has been fast and impressive. The 4,000 fans at Lyng this Sunday will be able to get an early look at Everts who is fast becoming one of top performing young talents going through the world championship feeder system.