Lupino on his dramatic final MXoN moto to win it for Italy! 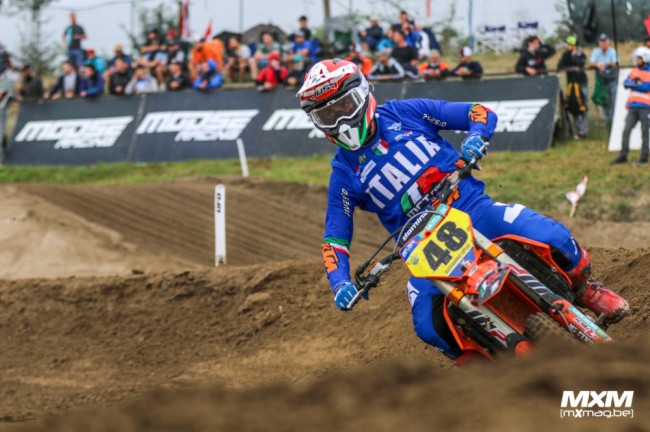 Alessandro Lupino became the man with the spotlight and the drama in the final race of the MXoN with a first turn incident, resulting in a penalty, plus a crash leaving Lupino having to make a crucial pass at the end of the race to win it for the Italians in Mantova!

Lupino is normally in the shadow of his best mate, Cairoli, but in that moto it was all about Lupino and, despite the pressure, the Italian got the job done for Italy!

So what was it like to race with the pressure of the country on your shoulders? An honest Lupino told us: “It was a really hard final race. After the crash I made I was not fit because of the pain in the head! It made everything more nervous! (See the crash and the hit his head took below).

Re-live the drama moment for Team Italy when Alessando Lupino crashed during the Race 3 of the MXoN here in Mantova!#MonsterEnergyMXoN #MXoN #MXGP #MXoN2021 pic.twitter.com/IJ9MocuiHe

“I think four laps from the end they put out the sign you need to pass two for the win! But like I said, it was not easy to ride with the pain I had. I give everything I had and 2 laps to go I make the last pass – it was an amazing feeling.”

On the penalty itself that saw Lupino lose ten spots for not going through the second turn after getting put off the track at turn one, the Italian thought it was a bit harsh.

“Maybe it was even too much, he admitted before explaining his situation. “When they push me out of the track I was P4/P5. I went back on the track and the only point that was possible to rejoin was that one, because before that point it was full of water. I stopped and started again and I was around P15 – but that is racing and can happen!”

But all the stress and drama was worth it and now Lupino can add the MXON world title to his CV!

See some raw action from team Italy below: