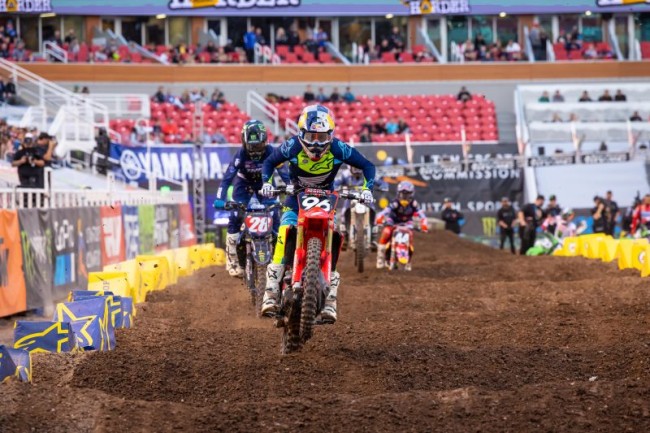 Sexton was fifth out of turn 1 in the 450SX main, but he was already up to second by the end of lap 1. The Illinois native made an early run at the leader but couldn’t quite match Jason Anderson’s pace and ultimately crossed the line just over two seconds back. The 250SX East-West Showdown final saw Lawrence take the holeshot from a poor gate position, and he led for two laps before relinquishing the spot to Nate Thrasher. Lawrence took the middle part of the race to regroup but closed back in on the leader as the three-minute mark approached. The two battled hard for the final laps, with the Australian ultimately coming up less than half a second short. Unfortunately, Hunter’s brother Jett had to sit out the race after a crash in qualifying.

Also of note was Honda wrapping up the Manufacturers’ Championship, and Red Rider Chance Hymas taking the 250SX Futures title.

Sexton: “At the beginning, Jason [Anderson] and I had a really good pace going. I made a few mistakes and kind of lost my flow a little bit, and once I lost touch, there was no getting it back; he was riding really good. Lappers did come into play, but he had to deal with them just like I did. It was a tough racetrack. I struggled in the dry, slick parts, but I was happy they put a lot of water down for the night show; it plays to my strengths when there’s ruts on the track. I’m happy to end the season on a somewhat high note. Minus three races where I didn’t finish, everything else was really good. I was in the top five pretty much every race, and eight podiums and a win is big progress from last year. That was my goal coming into this year; I wanted to be a little bit calmer. I still had a few moments out there, but I made a lot of progress with my riding and mentality. I just want to keep progressing. I’ve got a lot of work to do, but I feel like I’m on the right track. I’m looking forward to the outdoors and next year racing supercross. It’s going to be fun.”

Lawrence: “On the first few laps, I was jumping through the whoops, which I lost a lot of time on. I didn’t have that extra bit of energy and strength tonight, so I was watching the clock, trying to time gassing myself out. It was tough, a good race. [Nate Thrasher] was really close in a few spots, and I thought if I went a little more it may have crossed the line and put both of us on the ground. I just kept it clean, and it was a good race. Every year you see what’s kind of trending with the champions that win the class; the first thing that comes to mind is you obviously have to win, but also be on the box every round, so that was one of my big goals this year. I did that at every race I finished, bar A3 where I crashed out. That’s huge to tick that box in my book, so a lot of positives. We fell short a little bit, but I’m still not mad on the season. I proved a lot to myself and to other people. I left it all out there and tried my best every race.”

Linstrom: It was a hectic but exciting day for us as a team because we had Chance Hymas for the Futures class, both the East and West classes with the Lawrences and the 450SX class with Chase. We had a lot going on, but our guys were fast all day. Chance proved that he’s the top Futures up-and-coming rider, being fastest in all his sessions and winning convincingly. Unfortunately, Jett had a crash where he jammed his foot. He should be fine, but it just wasn’t worth racing and risking the outdoor series. Hunter didn’t have the best heat race but got an incredible start from the 14th pick. He was able to holeshot and had a great battle with Nate Thrasher before coming up just a tad short. Chase had another great race with Jason Anderson. We ended up wrapping up the Manufacturers’ Championship, which was cool for us as a team and shows that the brand is really strong in both classes. For the team, it was a really good day.”