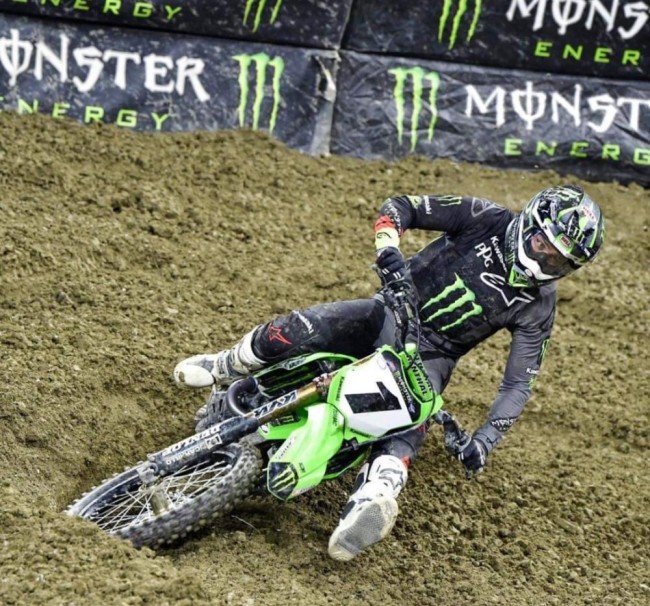 Eli Tomac was was in championship contention after the opening three rounds and had a win to his name but it wasn’t the old Eli Tomac laden with blazing speed charging through the pack, on show. However, in Indianapolis, it looked like Tomac is back closer to where he wants to be with his speed.

Eli had the fastest time in practice but his time his race pace was up there too – and his start was good! Tomac got into the lead but just when he was ready to pull away he went down dropping to third. But still showed he had the pace to catch Roczen and Cianciarulo before pushing Roczen right to the end in a race, that although he didn’t win, seems to have given Tomac the confidence that his pace is back where it needs to be.

Tomac on… the race

It was great. The pace tonight was hot. It was hot for sure the whole moto. I was like, If I’m going to get a chance at this thing, I got to start up front. Unfortunately, made the mistake. Just clipped my front end on that last whoop. Looking back, I’m just like, Gosh darn it. I’m such a dork. The rest of the moto I was paying attention to popping my front wheel over that last whoop. I’m like, Why did I do that? But like you said, getting up front is so key right now because you can see the top three guys can go. You lose eight to ten seconds that first lap and it can be over right now in a season like this.

I just had better riding. I didn’t change anything, any setup. I haven’t changed setup since the second round at Houston, so that’s been the same. It was just better riding. I felt more like my old self, even though I didn’t win on the night. But it felt like some old speed that way. Just happy about that. I felt kind of off the first couple rounds, but sometimes that happens. Hopefully, we’ll get in the flow here.

On his take away from the night

Just good racing. Kind of just craziness the whole time. It was exciting. It sucks getting second, but exciting racing. It makes me want to come back and race more. It keeps what we do exciting and want to keep riding and racing, at least it does for me. That’s what made me say that.

Yeah, it is. It’s just what happens when you get older that way. I’m still in it to fight for the thing and fight for everything and the championship and the wins, but it’s just fun in our class right now because it’s good racing that way. With the way the passes went down, yeah, I’m kicking myself for the outside on the sweeper turn. That’s one thing I’ll learn from the race. But just good racing. That’s the stuff you live for, is that type of racing.