Jett Lawrence on learning his sand skills from Herlings and Cairoli 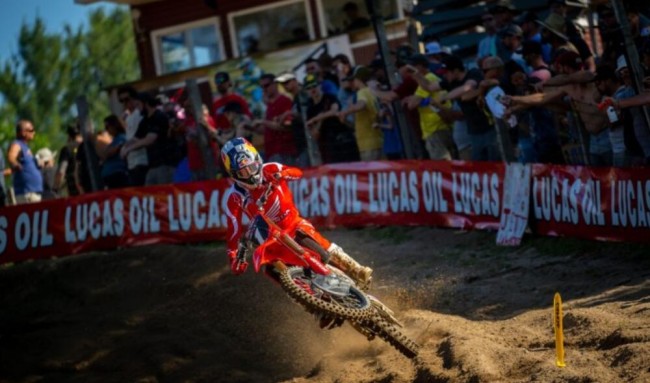 Jett Lawrence looked picture perfect in the sand at Southwick, even at times a little like Stefan Everts, his brother’s former team manager at Suzuki, such was his smooth flowing on-the-pegs style across the infamous sand whoops at America’s sandiest National. And the young Aussie star credits his time in the Belgian and Dutch sand for his riding skills – as well as getting to watch the best in thw world in action.

Speaking in the press confernce, Jett said: “I just gelled with the track today. Just felt like at home when I was in Lommel really, just kind of flowing. Just trying to keep the bike light. Just having a good time.”

When asked if he learnt his skills back in Europe, Jett said it was a big benefit along with getting to watch the likes of Herlings, Cairoli and Anstie – but that the sand is still different to Southwick: “Yeah, 100%. The biggest thing is, it’s still such different sand, in a way. In Europe, the sand is a lot bigger grain. It’s a lot heavier, so you can hit it and your bike won’t go through it as much. Where over here, if you hit it, but if you come into a turn hot and bury the bike, you’re most likely to completely destroy the turn.

“It’s a such different sand to Europe, but there’s so many more things that you can take away from Europe. I was riding since like 85s there at Lommel. I had seen Jeffrey a lot riding a lot there. Max Anstie, he’s a really good sand rider. Like you said, Antonio Cairoli. So, as a young kid, especially watching them, you can pick up so much small things and so much information from it. Them being nice guys that would kind of help a little bit every now, or they’d say, “You’re on the same path as I was when I was younger…So, it was nice to have that as your backyard in Europe, for sure.”