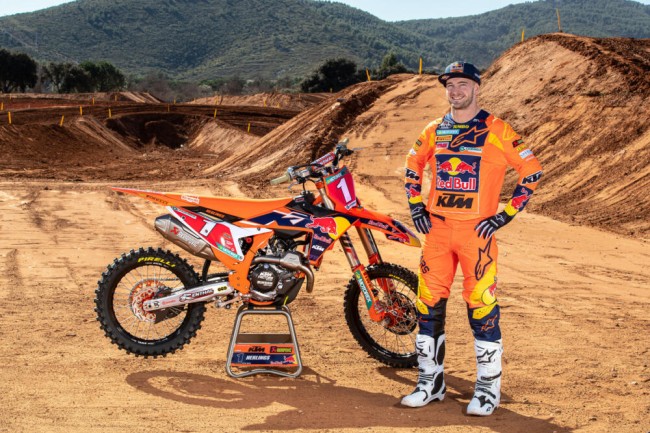 After breaking his heel in Spain, Jeffrey Herlings has provided an update on his injury speaking to Paul Malin and Lisa Leyland. At the moment, the MXGP World Champion is focusing on making a full recovery and then he’ll think about racing – at this moment he’s not sure when that will be.

“Good question (on when he’ll be back). I don’t know but we were doing a photoshoot and we had a race (the day before) along with a lot of testing, so I was a bit tired. We were doing a photoshoot, I jumped and got cross rutted in two lines at the same time and went over the bars. Even though it maybe looked like a spectacular crash it wasn’t high speed and I landed on my shoulder and my two feet, pfft. Luckily it was on my heel and I didn’t shatter anything in my feet which is good because the other foot is already really bad from a few years back – I still struggle with it every day. This one, luckily, well it’s not that lucky but I broke my heel and it happened just over a week ago”.

“It will still take a bit of time and I still don’t know when I will be back but the injury will most likely heal 100%. It just came at the wrong time, we will definitely miss some races, I don’t know how many for now – it could be 2, could be 4, could be more or could be less, I don’t know. We will wait and see but I just want to get back healthy, in the past I’ve started riding too quick and crashed again, I don’t want that to happen again. I want to be completely healed and then we will see what we can still do”.

Jonathan McCready and Andy McKinstry look ahead to the new MXGP world championship season and discuss the contenders, the injuries and the rookies plus much more ahead of an exciting new MXGP season. They also look at an fascinating MX2 series that is full of young talent looking to make their mark, including a certain Mr Everts as he starts his first full season in MX2 – but is Vialle still the favourite for the title?

Listen here on iTunes, or Spotify/YouTube below: