Vialle on Loket: It was a tough day 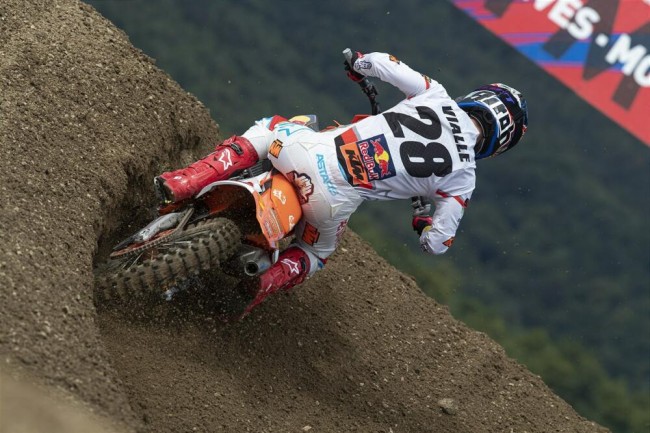 Red Bull KTM Factory Racing consolidated their position as contenders for the MX2 FIM Motocross World Championship as Tom Vialle ran to 5th place overall in front of a packed Loket circuit for the 2022 Grand Prix of Czech Republic.

After inaugurating a new circuit for the Grand Prix of Indonesia three weeks ago, MXGP resumed action at one of the staple venues on the world championship trail with the visit to Loket and the Czech round of the series. The tight, hillside hard-packed layout has been a consistent presence on the calendar since the start of the century and was once more home to EMX65 and EMX85 competition as well as the main MXGP and MX2 GP classes.

Hot and bright conditions graced the thirteenth date of the 2022 campaign and as the season enters the final two-month stretch with trips to Belgium, France, Sweden, Finland, Turkey and Oman still on the slate.

Vialle qualified 3rd on Saturday with the third slot in the start gate more than sufficient for the long drive to the uphill first turn. He was boxed into the front half of the pack in the first moto and couldn’t find his flow on the rough and rippled terrain after pushing up to 6th. Vialle passed the checkered flag in 10th and focused his energy on the second race where he took part in a gripping contest with title rival Jago Geets. The pair were split by just two seconds at the finish. Tom’s scorecard was enough for 5th overall.

DIGA Procross KTM’s Liam Everts used his KTM 250 SX-F to classify 8th. The young Belgian was 7th and 9th in the races as he continues to build his speed. The team counted on the presence of former British Champion Conrad Mewse to steer the KTM 450 SX-F in the MXGP category and the Brit managed 28th on his debut in the contest.

MXGP next heads into the fearsome Lommel sand for the Grand Prix of Belgium; the race will take place next weekend on July 23-24.

Tom Vialle, 10th and 2nd for 5th overall in MX2: “It was quite a tough day actually and the track here was really demanding. I made a mistake in the second turn of the first moto and that didn’t help me; for the rest of the race I couldn’t really push or attack the downhills. I just did the best I could. We made some changes for the second moto, a few suspension adjustments, and I felt much better. I was just behind Jago and we fought all moto. It was a positive end to the day. I only lost a couple of points for the championship and it looks like it’s going to go to the end so we’ll keep fighting.”