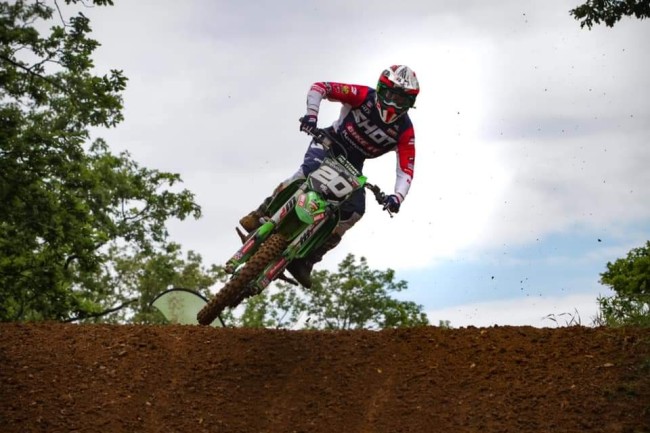 It hasn’t been an easy 18 months for Wilson Todd in MXGP with injury and Covid restrictions interrupting things for the talented Australian and preventing him showing his full potential. But Todd has always shown good speed and is doing so again in the British championship in 2021 ahead of the world championship opener in Russia this weekend – despite arm pump surgery three weeks ago!

We caught up with the Aussie ahead of the GP season beginning to talk about how his preparations have went, the race at Canada Heights in the British championship and adapting to life in England away from his homeland.

First of all, your start to the season at Lyng was impressive but then you got arm arm pump surgery. Was the arm-pump bad in testing and the races or why did you go for that so early?

I just had arm pump forever – my whole life. Pretty much at every event and it has held me back, I’ve definitely lost a lot of races and championships because of it. It was something I always wanted to do, I would have liked to have got it earlier in the season but it was hard to get here and hard to get availability with the doctor to do it, this was pretty much the earliest we could get it done. I think it’s going to help me in the long run but obviously I lacked a lot of bike time this weekend and I probably won’t have my fitness for the first few GPs just because I have had a few weeks off the bike and that hurts a fair bit. I think in the long run it’s going to help.

The photo you put on social media of the scars, it looks pretty sore! Was it sore riding the bike and did you get arm pump or was it just your fitness and bike time you were missing at Canada Heights?

Surprisingly, because it was my first ride back, I didn’t have any pain in forearms , no arm-pump or anything like that. But I had torn my hands to pieces, after a few days off your hands start to go soft, so it just sort of shredded me apart. By halfway through the second moto my tongue got stuck in the chain and I threw the anchor out and got third place.

Your speed was good all day, although that first moto I think you had about a ten second lead and had a couple of tip-overs. Was that just being tired or a couple of mental mistakes? It looked like you had the win in the bag.

I wasn’t really tired in the first one. My clutch got a bit of air in it so I didn’t really have much clutch and i went into one of the those corners in one of the U-turns and I accidentally clicked neutral and I thought I couldn’t get it into gear but it didn’t go into gear and I tipped over. That was the first one, got going, all good still had the lead. Then towards the end I came up on a lapper towards the finish line and I tried to go up the inside to go around and no-one had been there so it was icy and I just threw the bike away again. It wasn’t so much from being fatigued or anything, I was just trying a different line to get around a lapper, it was a bad choice, I guess I should have just followed! Then the two guys got past me I tried to get them back but it was definitely tough – the track was a bit of a goat track.

How have you found the British championship series this year?

Yeah, it’s seems alright. I don’t have too much to say, I am sort of doing it for a little bit of fun and to try and get some time on rough tracks. You can go practising around here but it’s a highway, you know what I mean? The best practice you can get is to go to these races where the track is going to be quite rough and get to practice some passing.

Are you planning on doing the rest of the British championship or are the ones you’ve done just for preparation for the world championship?

Yeah they are just preparation but I guess I will probably do the rest of them. There’s no reason not to but I don’t have to do it there is no pressure to do it but yeah, we will see.

Your world championship last year got cut short pretty early, it’s been a tough year for you with Covid situation, your injuries and being back and forward. How are you feeling now coming into the 2021 season for the MX2 world championship?

I think there is a lot of growing to do. i am not quite where I need to be or want to be. Last year there was a lot of shit happening that was making it hard for me and the team to get preparation right so I went in last year really under prepared. Then it’s sort of the same this year because there are a lot of restrictions and stuff. I think I will be in a better place because I don’t think I will be getting so much arm pump this year. Definitely the first few GPs I have a lot of building to do, I’ve got to get my bike fitness back, things like that but I think more towards the middle of the year I will be a lot further up at the front. Once we start figuring our bike out and I’m a bit fitter, for the first GP we were even questioning if I would go, we just aren’t ready but we are going to show up and just try and get some points and build through the year.

On the bike, your starts have been pretty good in the British championship but are there things you still want to do to it to make you feel more comfortable, you came back from Australia pretty late so you probably haven’t had a lot of testing time?

I don’t think many people would believe it but we are actually on a bone stock bike! I got a pipe. I had a good start at Culham, the first round and one good start yesterday. i was actually at the back of the gate, everyone shut off, I was laying on the guy on the inside of me and he backed it off and everyone backed off into the turn and I pretty much passed a fair few guys around the turn and came out first which was good. But for the GP we still don’t have a race bike so I am just going to be on something similar to what I raced. Hopefully we get the race bike for Matterley if not Italy.

Just on moving to Europe from Australia, Ryan Villopoto felt that was hard for him to do when he came to race GPs. But the Australian and New Zealand guys seem to be able to adapt pretty well to it – how have you found the adaption, living and racing?

I don’t think there is too much to adapt to! I am living in England at the moment, it’s a hard lifestyle, you have to really like riding motorbikes that’s for sure! From where I come from and what I’m used to, it’s definitely a couple of steps back in lifestyle. But I’m here to race and it’s kind of like someone going away for a mine job, I guess. The whole time I’m here it’s like I’m here for a job. There’s not too much fun stuff to do I’ll be honest with you!

A post shared by Bike It MTX Kawasaki (@dixonracingteam)

Do you find you need a release to find that extra enjoyment or are you okay with being here for a job and trying to be world champion?

I’m pretty good at just not really caring. I don’t mind giving up the lifestyle, I definitely don’t mind being here, as long as the results come I think we will be good.

On Australian motocross in general, with what the Lawrence brothers have been doing in America, Mitch Evans has been impressive in MX2 and MXGP, Jed Beaton and yourself coming through – a des Nations podium and victory might not be too far around the corner! It’s a pretty strong time for Australian motocross at the minute.

Yeah for sure. I think we are all getting better over there. I think there will be more to come, that’s for sure.

Do you think there is a reason for the strength and quality of rider at the minute with what is happening in your national championship? Or is it a case or people realising how good you can be and giving you more chances in the world championship or America?

Yeah, I think our championship, there are some good riders in our championship and it’s competitive. There are guys who do it full-time so obviously the bar is going to get raised higher. Also as you mentioned, myself, Jed, Mitch, Hunter, we were all juniors together in Australia and we raced each other all the time. We wanted to beat each other and I think that’s a pretty big part of where we got to – pushing ourselves. But yeah, it was that one big group and none of us wanted to lose that’s for sure!