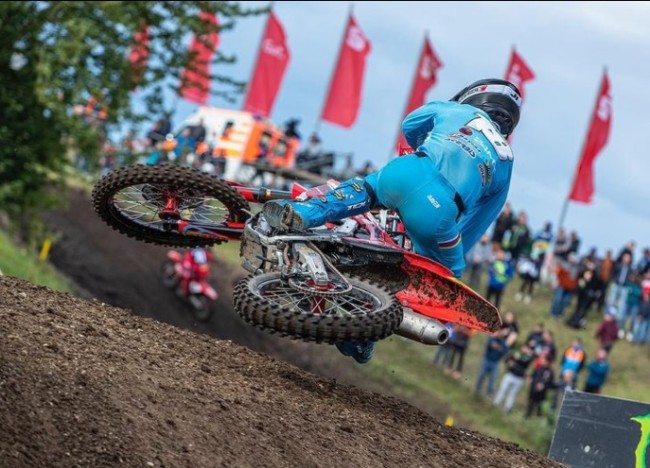 Coming into the 2021 season, Vsevolod Brylyakov had been away from the MXGP paddock for a few years but he landed a ride with one of his former trams – JWR Racing to race against the best riders in the world once again.

After being away from the MXGP paddock it can be difficult and the Russian saw that at the start of the season but he got used to the speed and intensity as the season progressed!

The season highlight has to be the MXoN as Brylyakov beat a host of big name riders to finish second overall in the MXGP class and that give him the boost he needed.

We caught up with Brylyakov to discuss his season and much more.

GateDrop: Coming into the 2021 season, you’d been away from the GP’s for a few years, what was the start of the season like trying to get used to the speed and competition again? I can imagine it was difficult!

Brylyakov: Yes, it definitely was very difficult, especially to accept it. But I had to as I got my bike only at the end of March this year and I couldn’t really ask from myself more than I was doing and I didn’t want to put myself on the ground or getting hurt. It was and still is a climbing up on the ladder process .

GateDrop: You signed with the JWR Honda team coming into the season, a team you’d been with in the past when they ran Yamaha, just how did the deal come around?

Brylyakov: Oh… that literally came like a thunder in a sunny day and already late into 2021, so I couldn’t expect it, but that was a great opportunity and I took it with both hands. I’m super thankful for that.

GateDrop: The level of MXGP, how would you describe it and has the level raised since  you’ve been away do you think?

Brylyakov: I knew already from watching, that it’s super high but when I got to the point of racing I was shocked, it was not even close to what I could expect. It came all the way from good intense racing to a proper battlefield where you have about 25-30 very fast and strong riders fighting for every single position. It’s crazy, this class is just insane.

GateDrop: What’s it like trying to compete against the factory bikes in MXGP? I can imagine it’s not easy…

Brylyakov: That’s true. It’s not easy at all but I was trying to not really look at it and just being focused on what I can do better and what I have to improve and that was the reason why we could battle with them in the 2nd half of the year.

GateDrop: You raced the MXoN for team Russia and that seemed to turn around your season, second overall in the MXGP class beating the likes of Olsen, Coldenhoff, Paturel etc… can you talk us though that day and how it felt to do so well?

Brylyakov: What a day it was! It was the absolute highlight of the 2021 season. We missed the podium just by 5 points. All Russian motocross was just going wild this day. About myself, yeah, it was good to have 2nd overall but as it is the MXoN, I was just racing for my country and never looked for anything else. 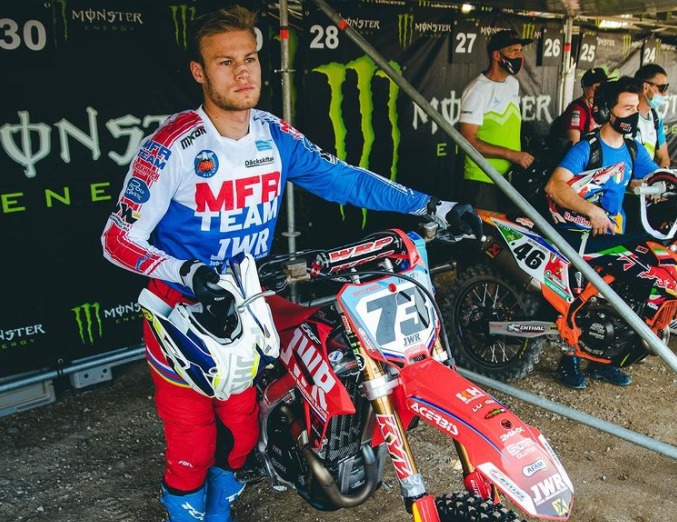 Brylyakov lining up for MFR at the MXoN Pic: Niklas Hampinen

GateDrop: Did the result from the MXoN help you mentally and your confidence? That you actually have what it takes to run with top riders…?

Brylyakov: I actually never lost confidence in myself but it did make me more positive and understand that I am coming back. And that yes, I do have it – 100%. But to be honest, unfortunately, I had to start to many times from scratch these few years with 2 bad injuries and being away. It takes a lot nut I’m here now and looking forward.

GateDrop: The MXGP of France was probably your best GP of the year, what were your thoughts on the Lacapelle-Marival track – old school! And you must have been pleased to go 14-17?

Brylyakov: Sure, the MXGP of France was the best one on the paper this year, but I had even better rides later in the season but just missed some luck.

GateDrop: MXGP operated a one day format the past two years because of COVID-19, as a fan and someone that loves racing I personally prefer the two days… What were your thoughts on the one day and what would you prefer?

Brylyakov: You’re right, for fans its probably better with the two days format as you have more content and TV time but one day format is safer for riders. As you could see that pretty much all the grid was there from the start until the final round. Maybe there is some combination. From my side, I didn’t really think about it that much, as I say — I was just committed to the process and gaining experience.

GateDrop: There looks to be a host of riders searching for rides in MXGP at the moment, just how difficult is it to get a ride at the moment?

Brylyakov: It’s crazy. So many good riders and all searching for a place. It’s went kind of went opposite from the past as normally teams offering contracts but now the riders have to come with an offer.

GateDrop: I thought the JWR Honda team might have kept you for the 2022 season but some other riders have been linked there… What’s your plans for the season ahead?

Brylyakov: Yes, It looks positive for me. I am going to stay in MXGP and now I know what it takes. Hopefully I’ll have enough time to get there before the season starts. But first — I am still going to take some time off.

GateDrop: Anyone to thank and anything else to add?

Brylyakov: I’m super thankful to each and everyone I have by my side to help me succeed, everyone who helped me this year. I have great people around me. And sure — biggest thanks and appreciation to my family, my mom, dad and sister. They stay with me and it doesn’t matter what. They definitely had a hard time to see me going through these times. We are here now – I’m grateful, positive and motivated for the future.