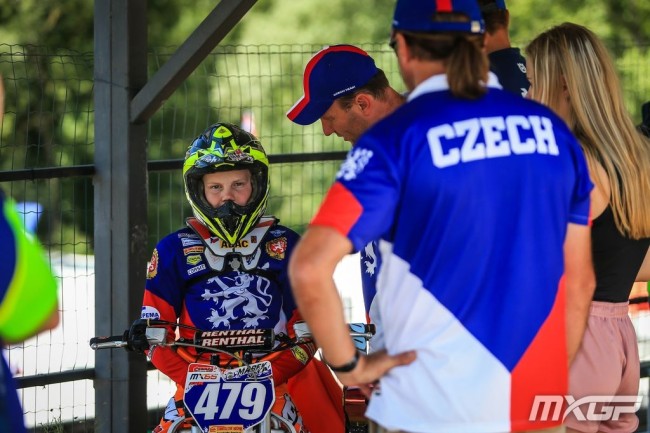 Young Czech talent, Vítězslav Marek only just turned eleven years old in April but he’s got so much talent on a bike!

The Czech talent went for the 65cc World Championship in Australia last year and won the first moto but then had a problem in the second moto which meant he had to DNF.

The determined eleven year old wanted redemption this year and he got just that at Arco di Trento. Despite not getting good starts, Marek battled hard and went 2-1 to win the 65cc World Championship.

We caught up with Marek to discuss his title, who he looks up too and more.

Gatedrop: Vítězslav, a great day for you winning the 65cc World Championship. Can you talk me through your races?

Vítězslav Marek: So both of my starts didn’t go well, but I didn’t give up. I was concentrating during the races, listened to my trainer advice through race and it worked. I finished second and then first and now here I am, the world champion.

Gatedrop: Just how does it feel to be world champion, has it sunk in yet?

Gatedrop: You’ll race the EMX65 series at Loket, what’s your expectations for that race?

Vítězslav Marek: It’ll be the end of me riding in the 65cc class and I’ll try my best. now I’m concentrating on this race and hopefully it will go smooth without any complications. I want to achieve a podium.

Gatedrop: Obviously there’s not so many top riders from Czech Republic. This helps put your country on the map in the motocross world so you must be happy about that?

Vítězslav Marek: Yes, I’m happy about it and I hope it will help Czech motocross.

Gatedrop: Which Motocross rider do you look up to the most and why?

Vítězslav Marek: I look up to Jorge Prado, I like his style and I want to be as good and successful as him in the future.

Gatedrop: In 2020, will it be time for you to move up to the 85cc? Is that a challenge you look forward too?

Vítězslav Marek: I am already riding on a 85cc, so it won’t be any drastic changes. Of course I will keep training hard and hope I will have the chance to ride on the world championship again.

Gatedrop: What goals have you set yourself for the future?

Vítězslav Marek: I want to keep riding and trying my best. Hopefully one day I will be able to be to race and win at MXGP level.

Vítězslav Marek: My “thank you” goes to my family, sponsors and all of my fans/supporters.