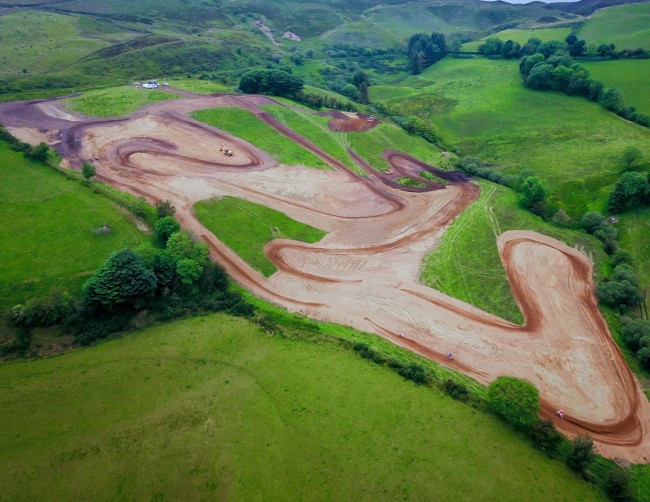 We caught up with Mick Mc Cullagh who was the man with the idea and helped put it all together. It’s great to see someone make a difference for the sport in Northern Ireland.

Gatedrop: Mick, you obviously don’t just wake up one morning and decide you’re going to build a Motocross track. When did you first have this idea?

Mick Mc Cullagh: It’s been on my thoughts for a few years now, Andy.  It’s probably five or six years, maybe even more. To be honest, it’s really been in the planning and took off the last year and a half to two years. Alfie Smith came over last year to help with Martin Barr and things started to get going then.

Gatedrop: I’m guessing it was something that a lot of work has went into and just didn’t happen overnight!

Mick Mc Cullagh: Obviously, the machines and stuff. It took about three weeks to build the track which is actually quite short for what we have in that kind of time.  We had Joe Moran up from Dublin as well and he helped Alfie. It wasn’t too bad in fairness but there’s still a lot more to do but the basic track is built.

Gatedrop: Will the track be used as a practice track and race track? It would be great to get another track on the Ulster/Irish Championship calendar. Do you think we will see it happen in 2020?

Mick Mc Cullagh: Yes, that is definitely the plan for it. It’s to be more a race track than a practice track. Obviously, we might run the odd practice day to raise funds for the track as it cost a lot of money to set the whole thing up.  (note: a rare practice day will take place on the track this Sunday). We definitely want it on the race calendar. (The MCCNI have confirmed a race at the track on Sunday 25th August).

Gatedrop: I believe the track is hard pack which is great news for the country. With Downpatrick gone a few years ago we needed another hard pack track.  Can you tell me a bit about the dirt?

Mick Mc Cullagh: Alfie Smith built the main track, we’ve put soil on the top and we are hoping to put more soil on. We are trying to look at the tracks in England with ruts, the likes of Culham, tracks like that, which rut up so much to make it more technical to help riders from here advance.  There’s very little hard pack tracks here that do that, that’s the line we are trying to go down to keep it inline with modern tracks.

Gatedrop: Former GP rider, Alfie Smith has been building the track. Just how did that all come about?

Mick Mc Cullagh: That all happened through Martin Barr. We used to run Sperrin as a practice track and then Martin took it over. Alfie came over and revamped the track for Martin and we got in contact that way. The work he does is pretty awesome to be honest. A massive thanks to him as none of this would have been possible without him.

Gatedrop: A number of top riders have already done some laps around the track, what’s the feedback been like from them?

Mick Mc Cullagh: It’s been better than what I even expected to be honest with you. It’s out of this world, everyone is smiling and everyone is running out of petrol because they can’t get enough of it.  Everything has been a positive so far.

Gatedrop: The riders I’ve spoken to about it have all said it’s quite fast. Obviously, we don’t know what way the track will form during race conditions, but have you plans to slow the track down and make it even more technical?

Mick Mc Cullagh: Yeah, as the track has only been built the last month, the dirt is still quite lose. There’s some big elevations as it’s on the side of a hill so it’s going to take a lot of watering. It’s very dry all the time but we are hoping when we run a race we will water it which will put a lot of moisture into the ground. That should help rut it up and the more ruts we get, that will help slow the track down. I just really want to build something good here for the people at home, you know yourself that we are lacking big time when it comes to the tracks.