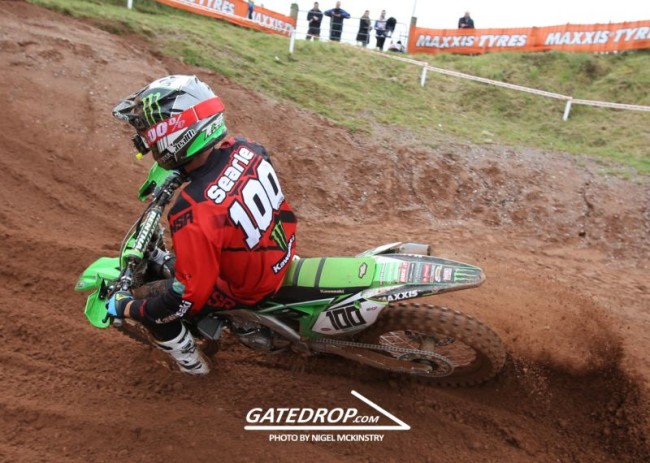 Since Tommy Searle finished sixth in the MXGP World Championship as a rookie he has had some bad luck with injuries in the last two seasons. However, he is back on a Kawasaki this year and showing some good speed at British Championship level and World level. Even though Tommy is showing some good speed he hasn’t had the results due to some bike problems. Bike problems have also let him down in the British Championship, without the bike expiring in the first moto at Desertmartin he would have the red plate.

Hopefully Dixon Kawasaki can work together to get the bike sorted for Searle because the speed is there for some good results in the GP’s.

We talked to a frustrated Tommy Searle at Desertmartin which hosted the fourth round of the British Championship.

Gatedrop: The speed was good this weekend just a bit of bad luck in the first moto with the bike..

Tommy Searle:  Yeah, the speed is good every week but we seem to have a lot of trouble with the bike at the moment. I would have gone 1-1 again this weekend and have the championship lead. I am now twenty-one points down which is disappointing but it is what it is and I can only race what I’m given. It’s just a disappointing day.

Gatedrop:  In the second moto you were miles ahead of everyone! But you crashed, was that just a lack of concentration?

Tommy Searle:  I had a thirty second lead and I just over jumped the table top a little bit. I don’t know really I just missed a bump on the jump and went down. I hit my head and I’m in quite a lot of pain so we’ll see what happens with that.

Gatedrop: You’re back racing the British Championship again, is it nice racing in front of your home crowd again?

Tommy Searle: Yeah, it’s nice to be back here but I just need to keep working and keep winning the races to get the points back now.

Gatedrop:  Back at Desertmartin, is it nice to be back here?

Tommy Searle: Yeah, honestly it’s a brilliant track and one of the best tracks in the world without a doubt so happy to be racing here.

Gatedrop: You’ve never been the best sand rider in the world, is racing the British Championship this year helping you with your sand riding?

Tommy Searle:  Yeah, it helps, this sort of sand I am quite good in.  It’s just when it’s really deep like Lommel I struggle a little bit but it’s because I’ve been injured a lot the last two years coming up to those races.

Gatedrop: The bike seems to be giving you a lot of trouble, do you know what the problem is?

Tommy Searle:  I’m not sure what the problem is, it seems to be lots of different things but hopefully as a team they will sort it out for me.

Gatedrop: How frustrating is it riding a bike that you know could just blow up at any time?

Tommy Searle: Yeah, it’s very frustrating especially at these kind of tracks. It’s a dangerous enough sport as it is without riding a bike that is smoking all race. Hopefully we can get it sorted as soon as possible.

Gatedrop: How is it to be back in an English team and working with Steve Dixon?

Tommy Searle: Yeah, it’s nice. Obviously it would be nicer if the bikes were running a little bit better but it’s nice to be with British based people.

Gatedrop:  Looking at the GP’s are you happy with how they are going for you?

Tommy Searle: No, not really. Again, bike problems at the GP’s. It’s frustrating but I’ve shown good speed and that’s one thing but it needs to turn into results.

Gatedrop: Last year when you said about the Des Nations team being picked so early, you had a lot of keyboard warriors, this year you are showing good speed. Does it feel good to prove some people wrong?

Tommy Searle: There are keyboard warriors in anything and any sport. It’s easy to sit behind a computer and do that but also at the same time they are the people that watch the races so they help pay the bills and without those lot racing and buying bikes, you know that’s part of the sport and without them there would be no sport. This year I am also fast, I think last year if I had have raced the Des Nations I would have been fast as well.  I’m a rider that shines at the Nations and always has done but Shaun rode great last year and again this year he is riding well. We’ll see, the nations is a long way off yet.

Gatedrop: Matterley Basin this weekend and you always go well there. You must be looking forward to your home GP?

Tommy Searle: Yeah, I am really looking forward to it. Hopefully I can have a good week this week and then see what that brings.

Gatedrop: Have you a one-year deal with Dixon or will it run into next season too?

Tommy Searle: We will have to see.