Interview: Tim Edberg on making the move to the MX2 World Championship 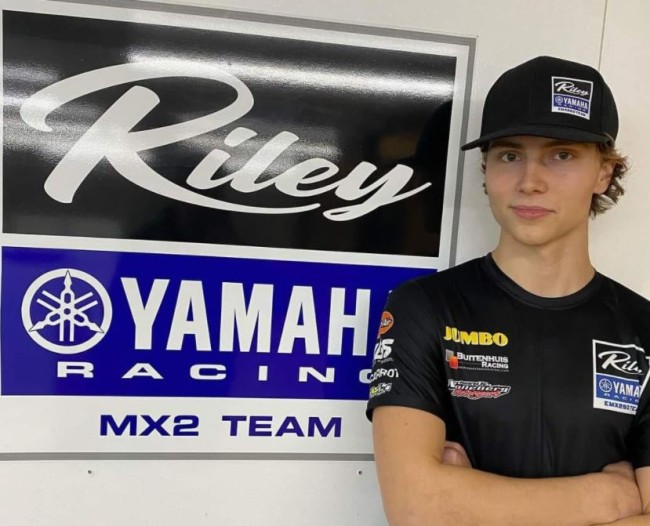 Despite having a tough season in 2021 due to injuries, Tim Edberg has still had the opportunity to step up and race the MX2 World Championship in the 2022 season. The young Swede has inked a deal with the Riley Yamaha Racing team – this is a team he knows well as he actually contested the EMX250 series with them in 2020 in what turned out to be a good season.

The Riley Yamaha Racing team have made the decision to step up and race the World Championship in 2022 which will be a new challenge for the team as well as Edberg.

We decided to catch up with Edberg to discuss his deal heading into the 2022 season and more.

GateDrop: Tim, just to go back to this year, it was very frustrating for you as I’m sure you were eager to contend for the EMX250 championship but injuries right from the start made it impossible!

Edberg: Yes, for sure that was the plan. The year started of like I planned with the off-season races but then looking back at it just before the EMX series was starting of my season was pretty much over, due to injuries and other difficulties.

GateDrop: It’s never ideal to leave a team either but things didn’t look great at Ghidinelli Yamaha but at least you secured a good ride with TBS-Conversions KTM!

Edberg: For sure, it was a very tough situation. Also changing brands in the middle of the season is not really an ideal thing to do and neither is riding with injuries.

GateDrop: You spent the 2020 season with Riley Yamaha and obviously did really well finished sixth in the EMX250 series, knowing what you know now, would you have left them in the first place?

Edberg: I definitely wouldn’t have left as I was feeling at home with them in 2020 also when it was a smaller team. I’m very happy that they let me back.

GateDrop: You’ve signed again with the Riley Yamaha team so you obviously left in good terms which is a good thing. How does it feel going back to the team and the fact they’ll step up and race the MX2 World Championship is great!

Edberg: It feels good, I know already what to expect from the team and I feel confident knowing that the bikes will be good etc. Being 20 years old and taking the step into MX2 feels like a good thing to do. It’s just a pity I couldn’t finish my EMX campaign on better terms but it doesn’t really matter as I got the chance to move up anyway and I’m really thankful that Olaf Haazen the team owner of Riley racing still believes in my potential and to give me this opportunity.

GateDrop: I’ve been looking forward to you making the jump to the MX2 World Championship, how does it feel to ride with the best 250cc riders in the world for the 2022 season?

Edberg: I’m not sure. I can only say I’m really excited and for me it’s kind of a second chance even riding 2022. But I know what I’m capable of and I’ve been beating some of the MX2 riders already so with the right preparations and staying happy and healthy I’m expecting some good riding from myself.

GateDrop: I thought at the end of the 2020 season there might have been a chance to see you in MX2 this year but that never happened and this year was difficult for you. Where you surprised to secure an MX2 GP ride?

Edberg: After the season 2020 I had quite a lot of options. I choose what was on paper the best deal for me and my family but as we all know now that wasn’t a good call, anyway you never know and I guess I’ve learned from my mistakes. I’m surprised, sure! But I’m here and I’m going to give it my all.

GateDrop: Just heading into the 2022 season, what’s your expectations for your rookie season in the class?

Edberg: It depends, sure, I want to do good but I know what it takes. If all the pieces are in place, it’s going to be exciting. But I have no result expectations and neither has the team on me, it’s a rookie year.

GateDrop: This year a lot of the rookies impressed such as Guadagnini, Benistant and de Wolf to name a few and you’ve beat them in one off races in the past so that must give you confidence?

Edberg: Yes sure, it’s been awesome seeing that for confidence but they aren’t the same as they were a couple of years ago they’ve done what it takes to get to the next step. But I also think it’s possible for me to achieve.

GateDrop: Brent van Doninck has signed with the team to race MXGP and he has lots of experience. Will you do much laps with him as that could help your speed going into the season!

Edberg: That’s the plan I’ve meet him a couple of times and he is a great guy. I think we can do some good trainings together, both on and of the bike. It’s great to have a team mate like that!

GateDrop: Obviously the season starts in February as things stand so you don’t have too much time to prepare, what have you got planned in the off-season in the new year?

Edberg: Obviously I haven’t been on a bike for a long times as my back injury and other injuries have been healing. But my fitness is still good after we did some tests together with the team before Christmas. So that feels good to know going into riding soon. We will be spending some time in Spain, that’s the plan so far. I’m really excited!