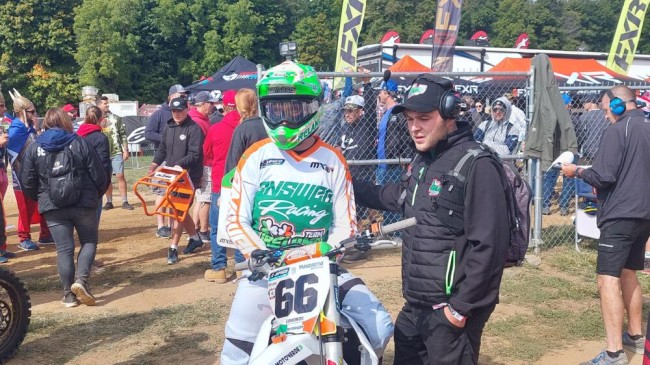 Stuart Edmonds rode his heart out yet again for the Irish at the 2022 edition of the Motocross des Nations. Despite struggling with injuries for a large part of the season, Edmonds ended the season on a high at the final round of the British Championship and brought that speed into the MXoN and rode fantastic in the B final after a first moto crash.

Unfortunately, the A final wasn’t meant to be for Ireland this year but all three riders rode really well and can be pleased about the speed – it’s just a shame the starts let the Irish down but they’ll be back for France next year!

We caught up with Edmonds to discuss his day at RedBud, his season and more.

GateDrop: Stuart, MXoN here at RedBud, you rode with your heart out there, give it everything you had and rode really really well, I don’t think we can be disappointed with the way any of the the three riders rode but it just wasn’t meant to be for Ireland this year unfortunately…

Edmonds: Yeah, it was unlucky. Considering like a few weeks ago I wasn’t the favoured man to be on the team. Especially coming back from injury to be able to come over here and pull off good results like that, I proved a lot of people wrong. I showed them what I was capable off, a lot of people doubted me. I just made sure I was coming here to do the job and I did the job right. I give it everything I had and did as much as I could and unfortunately it come down to the B final again. I went down on the first lap and through it away but I made sure I came back strong. I came back to fifth giving it the best that I could. I think if it was a 30 minute moto again like it used to be then I’d have definitely made some more passes.

GateDrop:  I was just about to say you guys could have done with an extra 10 minutes because you were catching everyone ahead of you and it was a shame what happened Barr because the last three laps he was one of the fastest on the track with Meara also flying. It’s just a shame you got bad starts and the first lap didn’t go better as you all had the pace…

Edmonds: Yeah, that’s just the way it goes unfortunately. You win some and you lose some.

GateDrop: The last round of the British championship went really well for you upping the pace, did that give you confidence coming into this race after a difficult season due to injuries?

Edmonds: My plan was always to be fit for this weekend in case I did get to ride the Nations. Everything was just a stepping stone up until this weekend so pretty much last weekend was just a plan of action of what I wanted to do, each weekend was going to be better.  That is exactly what I done so I knew that I would be peaking this weekend. As you can see from my riding and my results, my plan I put in place two months ago was exactly what I wanted to do this weekend. I showed everyone that’s what it was for.

GateDrop: What was your thoughts on the track both days? I thought day one was very fast and not technical but a bit of Irish weather overnight and it was much better on Sunday…

Edmonds: I actually really loved the track. With the way it was going yesterday it was very fast so I struggled a little bit with the track being so fast. I still managed a good result despite crashing in the warm up, the wind caught me going over Larocco’s leap and it killed my momentum over the jumps. That kind of messed up my lap times for the rest of the warm up but I made up for it in the race. 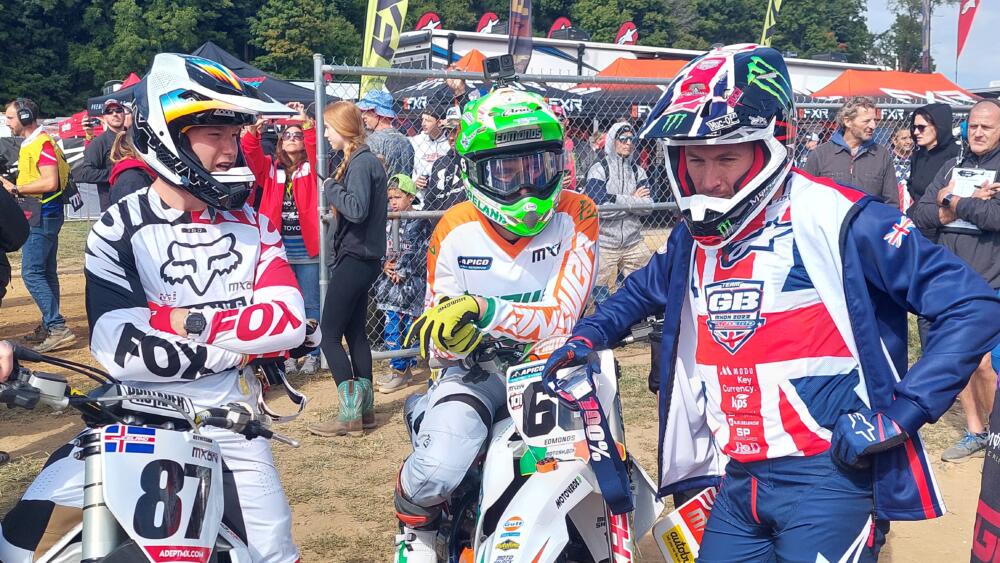 GateDrop: It’s been Mark Mooney’s first year in the role as team manager, from the outside it looks like he’s done a good job – a nice setup here, he picked a good team but just a bit of bad luck cost us…

Edmonds: He’s been brilliant. I have been thanking him all year as well as Cailum Meara and David Russell. They have done absolutely amazing and done more than what they should have. All the sponsors that Mark got on board, there’s been so many of them but they have really helped us to get here and that’s what is important. Mark has really done a lot to get us here and from a riders point of view what he has done for us this week, we haven’t had to think about anything. We have been here as professionals and we done exactly what we needed to do, we didn’t have to think about anything and he made sure we had everything. Everyone around us made sure we had everything we needed. It was a proper team and everyone was really helping all doing their bit. This is what really makes a difference at the Motocross des Nations.

GateDrop: From your prospective it’s a bit of a shame the season is about to end as you are on a high with the last round of the British and riding so well here. Now I guess the plan is to have a bit of time off then have a good off-season to start 2023 in this kind of form?

Edmonds: Definitely. As I said my plan put in place was to make sure I was fit for this event, the MXoN. Everything that I did was so that I could peak now and obviously now I will roll on. I will have a little break and try to get a deal for next year. I need to make sure I get that settled and sorted first and then roll into the winter to make sure I come out stronger than I did at the start of this season. It was unfortunate this year, I have been suffering from bulging discs all year and I still actually have issues with it right now. I also have really bad ligament joint issues – l4, l5 and s1. That is something that no one has really knew about from the start of the year so I had no power in my left leg at the first two British Championships. I was riding on my right leg and I just struggled. I really did struggle and for me to end the year the way that I did and after breaking my wrist, all the injuries that I had, I am pound of myself to do what I’ve done. I have shown what I can do and just push through, my work ethnic is unreal compared to anyone else and I don’t think anyone puts in as much effort training wise as I do and I showed that this weekend. I showed it the past few weeks and it is really important that people notice that and that I can bring that into next year to show what I am capable off.

Listen to all the team Ireland interviews on iTunes here or below: