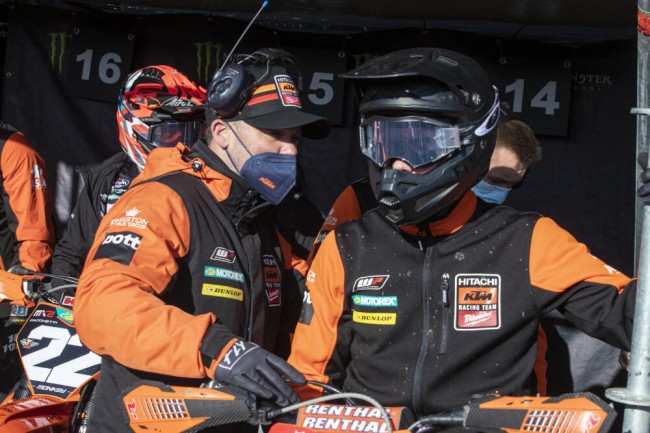 It’s all change for the Hitachi KTM fuelled by Milwaukee KTM this year as they have a fresh rider line up in the 2022 season having signed up Isak Gifting and Kay Karssemakers who are both very talented riders but both in different stages of their careers.

Gifting has a lot more experience than Karssemakers with the latter only signing with the deal last month and is making the step up from the EMX125 series to the MX2 World Championship – a big jump up but 15th on his MX2 GP is very encouraging signs.

We caught up with ex GP rider and winner, Stephen Sword who is working with both of them to maximize their potential.

GateDrop: Stephen, that’s the first round of the MX2 GP season done and dusted… I feel it was a very solid day for the team!

Sword: I think so. Going back to the qualifying race when Isak crashed and that cost him a good qualifying position. In the first race he crashed which cost him a top six probably, but he put it right in second moto by getting sixth which is where I thought he was this weekend. It’s not his favourite track so he aimed for the top six and got it once, I’m sure he’s a good top six rider and I think he’s got good tracks to come. He can settle on what he got today and feel good about it. For Kay it was just a learning curve really with it being his first GP and he did really well. All weekend he give it his all, I think physically he’s good but he just hasn’t ran that pace before or been involved in that kind of intensity. We’ll work with him but they both have something to work with now because they know where they are. For us as a team the bikes were good, starts were very good so we can focus on the next one and go from there.

GateDrop: Just on Isak, I feel like he’s always had the spend but injuries haven’t been kind to him and maybe a few too many crashes in the past. Having the speed is the hardest part though so it is just a matter of trying to calm him down at times?

Sword: Exactly, the thing is, and his good point is that he’s a racer so when you’ve got a racer you are always going to have crashes sometimes. He’ll give it his best shot all the time and that’s basically what we need to work on. He’s not got to look for any extra speed at times because he’s right up there but he’s not that great at qualifying doing one lap. In the qualifying race he’s always better so we need to work a little bit on doing a sprint lap but all in all his overall speed is fine. It’s just the little crashes and some of the mistakes that can be costly. His crashes at the beginning of the race even more so, if you crash 5-10 minutes before the end you might only lose 1-2 positions but on the third or fourth lap you can lose ten and that was his problem this weekend. He was unfortunate but he put it right and we’ll work away at it. It’s a long season so we are quite happy to be in the top ten at the first round overall. Kay got fifteenth overall so all in all a really good start for us.

GateDrop: On Kay, the deal for him to sign with the team was done very late to start with and not only that jumping straight up from the EMX125 class is a big step up for him but obviously an opportunity he couldn’t turn down. I thought at the start of the season he might actually struggle to score points but far from it! Couldn’t you’ve only had him for a month or so you must be happy with his GP debut?

Sword: Exactly. I mean we’ve only had him a month which meant he missed the majority of the pre-season stuff with the team. To be where he’s at already with not a lot of time, it’s encouraging that there’s good things to come. I don’t think you’ve seen the best of him, I think he’s going to grow and we want him to race all season long. We don’t want him injured at round two or three, that’s not what anyone wants but he needs a season under his belt and the British Championship should be good for him as well. When he’s practicing with Isak in the week, his speed isn’t far off Isak during the week either. Technically he’s a really tidy little rider, he’s got a good style and he can ride a bike.

GateDrop: I’m not sure how closely you follow the 65cc or 85cc racing but if you go back to four years ago or so he was battling with de Wolf. Injuries have affected him, but I feel like people forget how talented he is…

Sword: I done a little bit of research when we were going to be getting him and there’s no doubt he can run with the best when he’s good. He probably feels like he’s a little bit behind de Wolf now but he’s never had that path into a good team to help take him there. I told him he needs to be patient, he’s got six more years in the class so this year is just a learning year and we’ve got him for next year as well. It’s just about building on it each week. 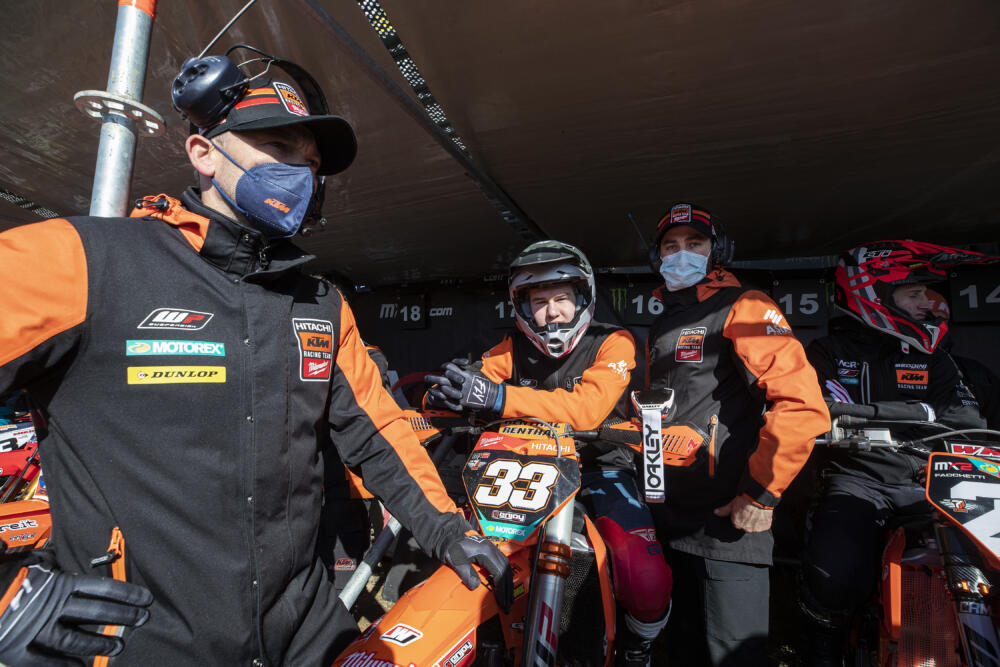 GateDrop: The last couple of years you’ve been working with Conrad and Bas but it’s a new rider line up this year. What’s it like for you and having the short off-season, it’s the same for everyone but maybe you’d have liked a little bit longer to work with them before the season started?

Sword: I mean I knew Isak a little bit anyway, but my job is fairly easy in a way. It’s the mechanics that do all the hard work loading the van and doing the bikes. I talk to the riders a lot and there’s a lot behind the scenes, a lot of being on the phone and then going practicing with them. I don’t so much do their physical training because they’ve got trainers but you are constantly tying that in with the riding. I just try to get the best out of the individual.

Conrad was an exceptional rider on a bike and we finished eighth in the world in the first year. Last year we won the British Championship with him and we had some good success and good times. There’s no stress there between myself and him. Each rider is different, Isak has something that Conrad didn’t have, Conrad had something that Isak didn’t have and Kay’s got the young talent so you need to nurture that to steer it the right way. They’re all different and it’s not just about the bike, it’s about the mindset more than anything because at this level, everyone knows it’s about the mindset and how they prepare mentally not just on the bike. There is a lot to it but I just try to keep them relaxed and simple, everyone tries to find a solution to something that might not be wrong. If you keep the basics right everything else is normally quite good.

GateDrop: It was the return of the two-day format this weekend, I’m personally glad to see it, what’s your thoughts on it?

Sword: I mean as a rider they probably just want to turn up and do the one day and I can see why they would. Like in America they just do the one day and go home again but I think the GP’s historically has always been two days. The qualifying race puts on something for the fans and from some riders point of view they might need that qualifying race to warm them up more but some just like the timed practice. There’s positive and negatives for different riders but as teams, you set the awning up and it’s a lot to set up for just one day. When it’s a two day event it kind of feels like you are here a bit longer and it’s worth putting it all up. 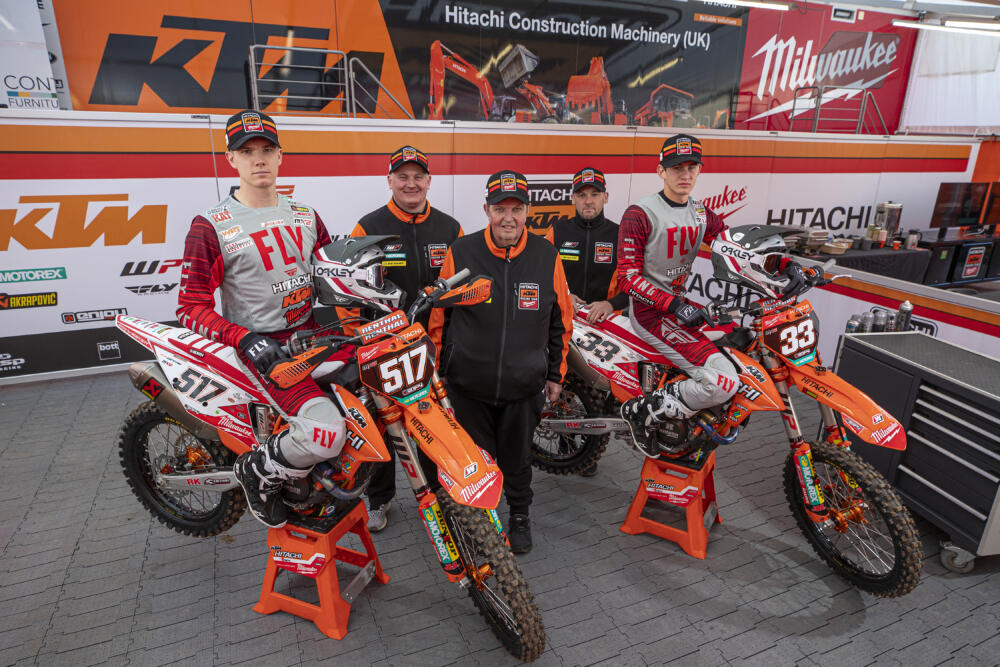 GateDrop: What was your thoughts on the track this weekend and what did the guys report about it?

Sword: There was a lot of moisture in the ground so it got really deep ruts and technical but it was good. I’m pleased that it got postponed – we were just unlucky last week with the weather but it was nice to be here this weekend to get a good start of the season. It proved that you can run the GP in February if the weather is alright in England, I mean it was always a gamble it was going to be wet, wind, snow or whatever but actually the track was in brilliant condition. They left it technical and I thought it was really good.

GateDrop: Just looking ahead to the British Championship, I’m guessing it’s the teams goal to win it!

Sword: Absolutely, I mean Isak will go for the win there’s no question about that. Kay will go for the podium and I think he can mix it up now and then. I think Conrad will be the clear competition for them but you know what it’s like, there’s always some other riders that are good at riding in the UK. We’ll see what happens but we’ll aim and it’s quite a tradition that Roger (Magee) likes to win it and we put in a lot of work so we’ll be going for it.