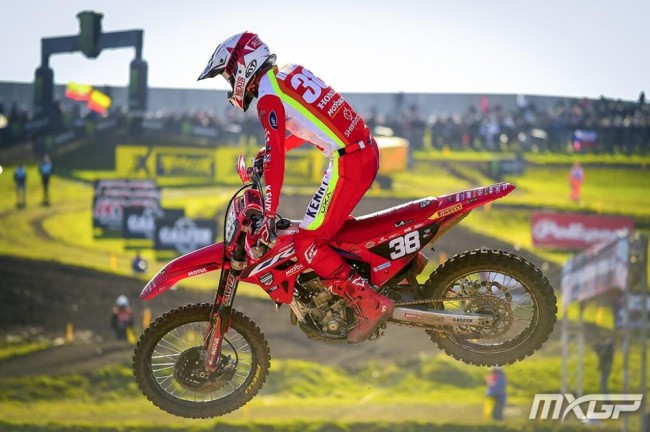 It’s been a difficult few years for Stephen Rubini but we must not forget the French rider has plenty of talent – he did battle for EMX125 and EMX250 titles in the past. Since making the move up to the MX2 World Championship injuries haven’t been kind but as he enters his final year to race the series, Rubini is determined to end his MX2 GP career on a high.

The first round went very well for Rubini finishing 5-10 in the moto’s for an impressive seventh overall. The SR Honda team have already did some nice things in the MXGP class and they already look to have a good bike for the MX2 World Championship and it’s nice to see Rubini show his potential.

We caught up with Rubini after round one at Matterley Basin to discuss his weekend.

GateDrop: Stephen, the first round of the MX2 World Championship at Matterley Basin, it went well for you and especially in the first moto! I think you’d have surprised a lot of people there finishing fifth. From your side, can you talk me through your day?

Rubini: I think we did good, we progressed all day long for the qualifying day. We came out today more comfortable on the bike and the settings were also better. For sure, I am very happy with fifth in the first moto. We did two good starts which is also a good point and we can see that the bike is working not too bad. Unfortunately, the second moto was not so good because I wasn’t in such a good rhythm, I was taking lines from the first moto which weren’t working as well in the second moto. Overall, it’s a good first GP and we know that we aren’t 100% ready because of the short winter but we will get stronger each weekend. Overall, we are happy with how it went.

GateDrop: Just on the first moto, how did it feel to be up there at the front battling again? It’s been a pretty long time due to injuries and things you can’t control but it must have felt great to be right at the front…

Rubini: It felt really good. I am happy because it’s the first weekend in a long time that I felt I didn’t have much pressure. I was happy all weekend and could eat what I wanted etc, being up front and fighting with the top guys felt great. I could see that I have the speed to be up there, but I just need more consistency and do it for a full weekend.

GateDrop: You’ve been with the Assomotor team for a while and that team sadly decided to close their doors but coming into the 2022 season you signed with SR Honda. The team have done some good things in MXGP already and it seems if they’re going to commit to something then they’ll do things the right way and the bike looks good…

Rubini: They’ve been doing a really good job and they’ve been really supporting us. They want to improve a lot – with the mechanics and the riders, they always want to go in the same direction so that is amazing. We can progress each weekend and we will continue to progress with the bike. Overall, it is a really good team and they listen to us, I am really happy with the vibes inside the team. We can talk and share things we have so I think it’s going to be a good year.

GateDrop: Just on the off-season even though it was short, you managed to stay injury free and working with Yves Demaria, how did the off-season go for you, and did you feel confident coming into the GP’s – did you think this morning you’d be able to finish a moto in P5?

Rubini: Well, at the beginning of the winter I was really trying to improve my brain because I was low from the last season. I was not so looking forward but after a good winter even though it was short, I felt good but… I wasn’t expecting P5 and almost P4! But I knew that I could be top ten but fifth was a bonus so it was good.

GateDrop: The two-day format is back – for the fans I think it’s much better, but I know some riders prefer the one day, what’s your thoughts?

Rubini:  I really like the two-day format because like I said earlier, Saturday we could progress a lot with the bike which we weren’t able to do last year. Overall, I think it is better because each day is different and the track is changing all day. With two days we can change things, try things and get better, it’s better to have more time for that. I think it allows for better races also.

GateDrop: On the track, I’ve been coming here for 10 years or so and I’m not sure I’ve ever seen Matterley Basin as rough. Did you enjoy it and was it as rough as it looked?

Rubini: It was really rough, actually but I think that’s good. The past few years here we either had too much mud or too dry but this weekend it was just perfect thanks to the rain we had this week. I think it was the roughest I’ve rode here.