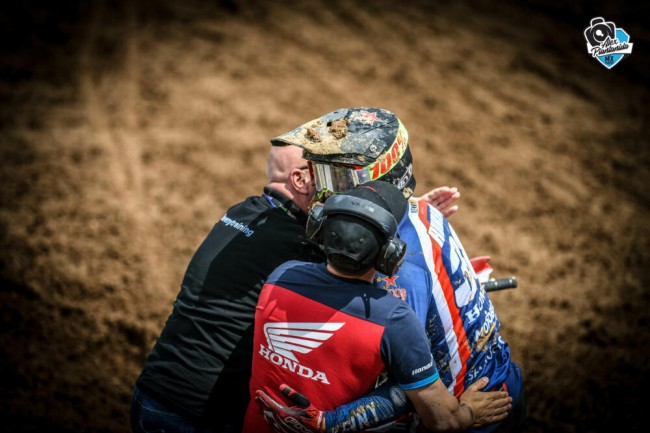 It was a special day for Stephen Rubini at Maggiora as he stood on the MX2 podium for the first time of his career and it was also a special day for the SR Honda team securing their second ever Grand Prix podium. They’ve had a while to wait since Jeremy Van Horebeek’s podium at Argentina but it’s been worth the wait.

GateDrop: Stephen, a special day for you here at Maggiora in Italy securing your first MX2 GP podium? Emotional I am sure as this is what you’ve worked so hard for…

Rubini: Like I said a few times already, it’s been a really long journey. Since the European championship, I’ve had some tough years and a few times I asked myself should I quit or should I not? I was really low at some points but to finally be up there, I am just so happy that I did not give up. With all the work I’ve done, it’s just so nice to be up there.

GateDrop: In that first moto, you were catching Jago at one stage but then two backmarkers got in the way and kind of ruined it which would have been frustrating but at the same time you knew you had the pace so mentally that must have felt great…

Rubini: Yeah, first to take the good start and then I was putting in some good laps. I was catching Jago and then the backmarkers were in the way and that was frustrating and then I tried to push again but then the radiator cap popped out and my bike was smoking… I was stressed because I wasn’t sure if my bike would go to the end or not. I had to slow down a little bit so the bike would cool down but we made it to the end so that was good.

GateDrop: Are you maybe a little bit surprised yourself? When you woke up yesterday morning did you think you’d be standing on the podium today?

Rubini: You know, yesterday was a normal day for me. I was not the greatest, but I wasn’t the worst either. I think today I just showed who I am really, my trainer says to me every week that if I ride like during the training then you can be on the podium almost every weekend… It is finally cool to see that we have made it and I just need to believe more in myself that I can be up there.

GateDrop: What was your thoughts on the track both days? It was very different!

Rubini: On Saturday the track was supposed to be for me, it was kind of like a French track but I like more when it’s rutty and technical. I really enjoyed today and more than yesterday.

GateDrop: With the track being so different both days, did you change much to the bike? You were good all weekend…

Rubini: Not really actually. Just coming into the weekend we changed the shock and this weekend we used our training shock but that’s all we did actually with the setup. Obviously the team changed so much from Saturday to Sunday so we changed the sprocket but that was it.

GateDrop: You are quite experienced when it comes to MX2 so what’s your thoughts on the MX2 level this year? To me it seems like the top fifteen on any given day could podium but perhaps Geerts and Vialle have a little edge on the rest when they step it up?

Rubini: We can see that Jago and Tom are from my point of view faster than us but for the rest…  I could finish second like I can finish tenth, you know? The level is so high and everybody is on the same speed. We could see during the timed practice that ten guys were split by a short time. The level is high and I can do second just like I can do thirteenth. 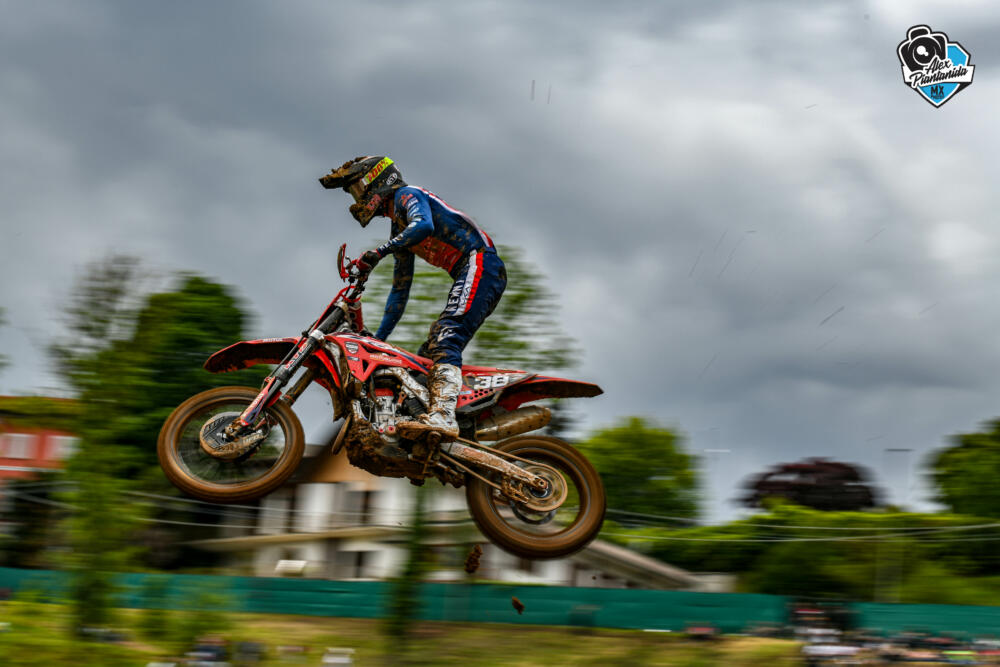 GateDrop: Starts are very important! Just on the team, you must be happy with how everything is going with the SR Honda team? Is it true you are riding with a standard engine?

Rubini: We are really happy with the team. It’s not a factory team and to be up there battling with the factory riders is really good for us and a big accomplishment. The standard Honda is already pretty good, we haven’t done much on it, we are still working on it but the more you put on it the less it works. We are already happy with the standard bike with some modifications but honestly not that much.

GateDrop: A standard 450cc to get good results in MXGP is understandable as the bikes are already so fast anyway but in MX2, I don’t think there’s to many riders racing a standard engine, so you are doing a really good job…

Rubini: Of course. There are many factory bikes in MX2 and almost everyone – there’s so many Austrian bikes. To be able to fight with the Honda and to put the Honda on the podium is really nice and I am looking forward to do it again to show that the Honda is not a bad bike.

GateDrop: It’s early to discuss it but this is your final year in the MX2 World Championship, hopefully we will see you in MXGP next year, I’m sure that is what you want and hopefully even with the same team…

Rubini: We’ve talked about it a few times, but we didn’t go deep in the conversation because it’s still quite early in the championship. I want to fully focus on my last season in MX2 because as you know, it’s a long season and many riders fight for the top places. But of course I am looking forward to going to the 450cc, it would be really great to go with this team also because it’s a really nice team.

GateDrop: Have you rode a 450cc much already practicing and how do you feel on it? You aren’t too aggressive so I feel like it should suit you…

Rubini: Well, I do have a 450cc bike at home, I’ve rode it a few times but not that much. I don’t think I’ll need to change my style because I think I am pretty smooth, and I really enjoy riding the 450cc. It’s strong but I’m not aggressive so I think it’ll suit me better.