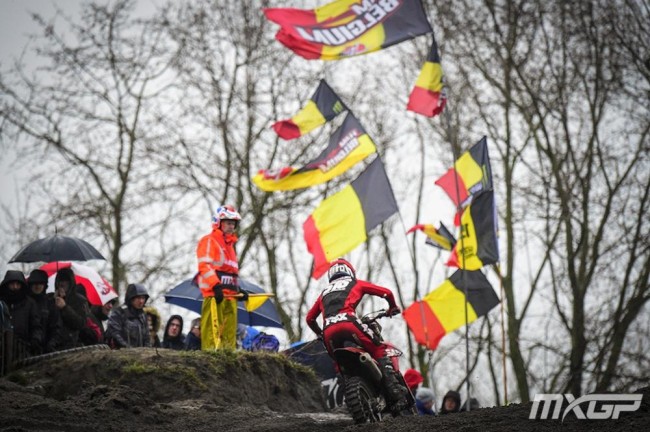 Last year Simon Längenfelder had a superb season contesting the EMX125 championship and he ended up third in the series on his WZ KTM. The normal path from the EMX125 series is to make the move up to the EMX250 championship but after the DIGA-Procross team from GasGas, they were on the look out for another MX2 World Championship rider and it was to good an opportunity for Längenfelder to turn down.

During round two of the MX2 World Championship at Valkenswaard, the 15 year old showed blistering speed and was in third in the second moto until a crash mid moto and then running out of energy demoted him to fifth but to already have a top five moto finish is very impressive.

As the young German gets more experienced and used to racing the MX2 World Championship he should only continue to get better so keep an eye on him.

We caught up with Längenfelder after his impressive ride at Valkenswaard.

Gatedrop: Simon, Valkenswaard was great for you, you had a strong qualifying race and that second moto, wow! You must be pleased with your weekend. Can you talk me through it?

Längenfelder: The weekend started good on Saturday. It was nice to battle all weekend with those top guys, I really enjoyed it. The start of the first Moto didn’t go according to plan, but my speed was pretty good. In the second Moto I had finally a good start and felt like I can hold the speed pretty good. I tried to keep the speed as long as possible till I got a bit tired in the end of the moto. I would never thought that I could be top 5 in a race already this year, but that was last weekend and we keep on working hard.

Gatedrop: I believe you had an injury coming into the season so you aren’t even fully fit, can you tell us about the injury?

Längenfelder: Yes, this is true. I had a cut in my small finger while training in Spain. Unfortunately it got infected and I needed a small surgery. Everything went good and I could continue the training a few weeks before the first GP.

Gatedrop: That second moto, how did it feel to battle with top MX2 World Championship riders, did you feel comfortable?

Längenfelder: I felt that’s my place to be. For sure there are some guys like Tom Vialle or Jago Geerts who are still faster than me but I’m just 15 years old and have still a lot of time to improve. I was really happy to make some passes while riding in the top 5.

Gatedrop: Coming into the weekend what were your expectations, did you really expect to be battling in the top five?

Längenfelder: No, not at all. I was just trying to have fun and not to be nervous. I didn’t think about any position I wanted to achieve.

Längenfelder: Yes, the track was rough and difficult again, that’s what I like pretty much.

Gatedrop: You’ve started working with ex GP rider, Joel Roelants, how has that been and what sort of things has he helped you with?

Längenfelder: He helps me with a lot of things, not only fitness and riding. I feel like he is doing a great job as a trainer and cares about my progress.

Gatedrop: You’ve now had two MX2 World Championship rounds on the GASGAS, do you feel comfortable with the bike?

Längenfelder: Yes, I really like the new GASGAS, we have tested a lot during the winter and have a really good setup.

Gatedrop: A tenth overall already for you, what’s your goals for the rest of the season? Have they changed any?

Längenfelder: No, they didn’t change. I want to improve all season, and then we will see where I end up.

Gatedrop: Stepping up from the EMX125 series, how would you describe the level of the MX2 World Championship?

Längenfelder: You can’t really compare the level of those two classes. There are definitely more really fast riders and you need to push really hard to have the speed of them but that’s what I like and helps me.