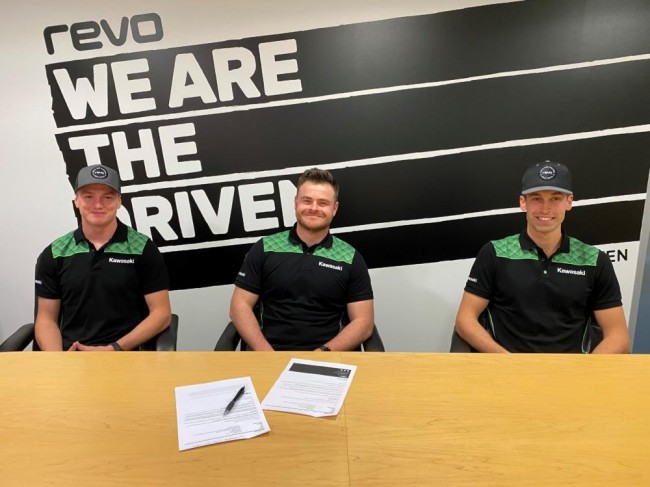 Earlier this week the brilliant news was announced that REVO would be back in the Motocross world for the 2021 season. The team will run Kawasaki’s and moving forward will be known as the REVO Seven Kawasaki team.

The team have an exciting rider line up in the form of Dylan Walsh and James Dunn to attack the British Championship and MX National series which will be the main focus. Walsh will also contest selected MXGP World Championship rounds with Dunn contesting some EMX open races.

We decided to catch up with Sam Yates who will be the team manger for the team next year.

GateDrop: Sam, fantastic news for British Motocross as the REVO team are back in the paddock. Just how difficult was it to put this altogether?

Sam Yates: Yes, its brilliant news, not so difficult in all honesty. I won’t go into too much detail. We made the decision early last week and within 48 hours we had the ball rolling. We spoke with Ross Burridge at Kawasaki and with Roger Larsen from Seven mx who is a good friend of ours and then things escalated very quickly. We were also very pleased that most of our product sponsors were also keen to be involved and support the program.

GateDrop: The team stopped at the end of the 2019 season, why did you take the decision to step away from the paddock? It’s actually worked out pretty well in the end because there wasn’t even a British Championship in 2020 so not a bad season to miss!

Sam Yates: We made a conscious decision to step away due to the high costs involved and very little coming from empty promises of financial support leaving Revo footing most of the costs. My father Mark also had a lot going on in the Core REVO business that needed to be his main focus, so it just made sense to make the move. In hindsight it was the best move to make with everything that has happened in 2020 around the pandemic with lockdown and no racing.

GateDrop: You are now the team manager of the team whereas before I believe you were mechanic. How much will your role change from before?

Sam Yates: Yes, I was the crew chief in 2019, and in all honesty my role is no different now. I managed the day to day of the team, built the engines and was Dylan’s race mechanic. My father Mark had major heart surgery in the May of 2019, so I pretty much took over running the team for most of the season. 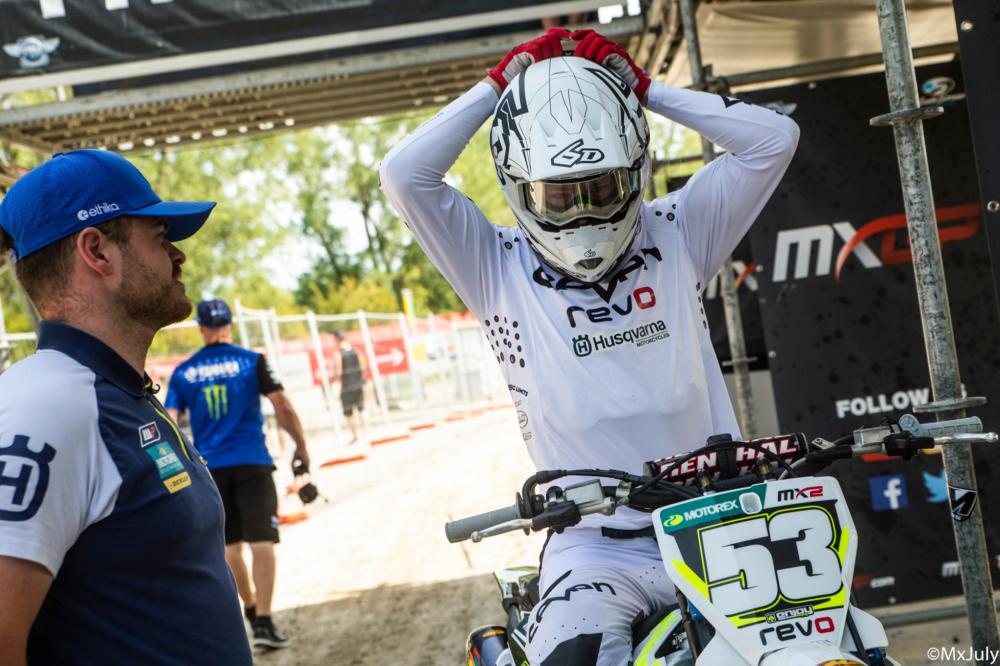 GateDrop: The team ran Husqvarna machinery in the past and had good support but will run Kawasaki material in 2021. Why did you decide to go green?

Sam Yates: Honestly there is a few reasons, one – there is very little support from KTM/Husqvarna anymore, nothing like we had in 2019 and their decision was to have one team per brand which would obviously go to existing teams which we understand having being absent for a season. Two – we had a good relationship with Ross Burridge from working with Kawasaki in the past. So, it made sense to switch it up. The Kawasaki KXF450 is an amazing bike out the box so it made sense and was a good fit.

GateDrop: The first stint the team did you decided to focus on MX2 but this time MX1, why is that? I imagine it’s cheaper to run a 450cc as the standard bikes are already so fast these days…

Sam Yates: To be honest it has nothing to do with a 450 being cheaper to run, the reason was that both Dylan and James have aged out of the MX2 GP class, so it made more sense to go 450. Which allows us to do selected GPs and get our foot back in the door. Dylan has been riding 450 for the last half of the 2020 season so it doesn’t make sense to drop back into the 250 class. We are however going to do a bit of development with KXF250 and see where that takes us.

GateDrop: The team have signed Dylan Walsh. I’m sure he’d have loved a full time MXGP ride so was it hard to get the deal done – how do you think he’ll perform in the British Championship next year?

Sam Yates: Dylan has been living with me, so it wasn’t that hard, whatever he decided to do we would support him. He had a few options; some fell through and some just weren’t a good fit. There’s also a number of good riders looking for rides and it appears those that are getting them, are paying to ride! So, we sat down and made a plan. I have no doubt that Dylan could win the MX1 British title. There are some amazing riders there, and it will be tough, I think he showed his speed jumping on a Honda he had ridden once with no pre-season training and leading moto’s at Hawkstone against a lot of big names.

GateDrop: James Dunn has been away from the sport for three years. Why did the team make the decision to sign him for 2021 and what’s your expectations for him next year?

Sam Yates: I worked with James for the 2016 GP season and so I know his determination and work ethic. We wanted a two-rider line up, James was the perfect fit. I do believe with the support and training and riding alongside Dylan through the winter, that he will come out swinging.

GateDrop: You’ve worked with top riders like Martin Barr and Alvin Ostlund in the past. How were they to work with and were they considered for 2021?

Sam Yates: Yes I worked with a lot of top riders, every rider is different and have different preferences, Alvin was a yes/no type of guy, whereas Martin knew what he wanted and could explain in detail. I guess it comes down to experience. Like I said this was all last minute so to be honest, we didn’t really consider anyone else for the job , I have a good relationship with Alvin Ostlund and for sure if we were doing a full season of GP’s, he would have been considered. 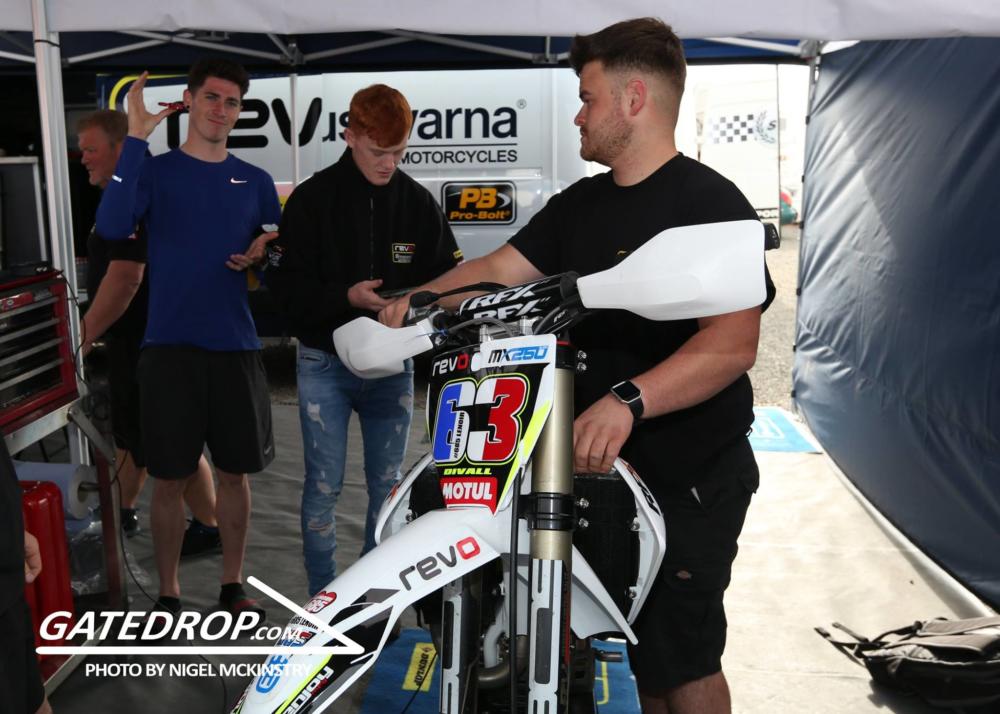 GateDrop: I am sure Walsh will be pushing to do as many MXGP rounds as possible. How many do you think is realistic for the team?

Sam Yates: To be honest Dylan is not overly fussed about the GP’s, his main goal is to win a back to back British title and eventually ride in America. We have some plans for the later part of the season to maybe make something happen in the States. Realistically we hope to compete in 5-6 GP’s.

GateDrop: If there’s injuries in MXGP and Walsh gets offered a fill in ride – is that something you’d let him do?

Sam Yates: Commitment works both ways so the answer would be no! We also have commitments to Kawasaki and others. Fill in rides can last for one event and are not always the best option. There’s sometimes a bigger picture to consider too!  Our main focus is to win the British and that will always be the main focus.

GateDrop: Did you think about being a full time MXGP team in 2021 or even all European rounds? Could this be an option in the future?

Sam Yates: We have talked about it, but the problem is that without sufficient external funding it’s too much. We have amazing product suppliers but when it comes down the money side you need that funding. We would have to have a title sponsor come on board to warrant going back to full time GP’s

GateDrop: Obviously, the team decided to stop at the end of 2019, now you’ve returned to the paddock what’s the long-term plans for the team? Hopefully you can stay in the paddock for a number of years!

Sam Yates: The plan is to do the best job we can in 2021 season and go from there, we obviously aren’t coming back to be a one-year wonder, but anything can happen. The team is a small part of Revo and definitely not a money earner, so we will just have to wait and see.

GateDrop: Just on British Motocross, Gareth Hockey will be running the series next year. What’s your message to him on what he can do to improve the series?

Sam Yates: To be honest, if its anything like the Beach race, its going to be a step in the right direction. I personally think the paddock parking for teams should be improved, the amateur/youth should be kept separate. So, when spectators turn up there is a nicely set out pro paddock like the GP’s. There also needs to be more entertainment kind of like the Redbull Pro National days. It will encourage more families to have a day trip out to watch the racing. I’m looking forward to seeing what the RHL guys bring.