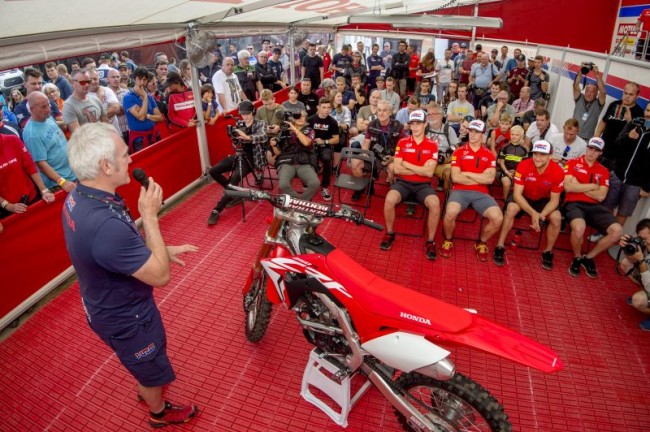 After two world titles in two years it has been a turbulent season for HRC Honda in 2017.

But Tim Gajser brought some sunshine to brighten the dark days in Sweden last weekend to claim his and Honda’s first GP win since round four in Mexico, as the 2016 MXGP word champ looks to get back to his best form after the injuries.

We caught up with the always effervescent HRC Honda MXGP general manager Roger Harvey to talk about Gajser’s win and find out that he might even be racing at Anaheim one in January!

We also talk about the difficulty and reasoning for letting go of Evgeny Bobryshev as well as the MX2 age rule and influx of riders all trying to get a ride in MXGP.

I’m sure it was good to get some good news back in the team with Tim winning in Sweden going 1-2 with a very good performance?

Yeah it was. To be honest the injuries he suffered mid-season, it stopped him in the end but it almost didn’t stop him and it’s taken a while to get over that and then come back to form. He is still not where he was and where he can be although winning in Sweden, you can see the improvement all the time. He is feeling better in himself, he is feeling stronger and things are getting that bit easier. Sand races, Lommel isn’t his best and he will admit that, he is working on it although the year before he won there. If he had been 100% fit at Lommel we could have seen a bit more from him. But hard pack tracks hopefully he will be stepping it up.

He said after he won he has been working really hard to come back, do you find he is good to work with that way?

Absolutely! He doesn’t mind some hard graft, some hard work, that’s never a problem with him. He is an extremely fit athlete, he doesn’t mind working. But the injury prevented him from working, all he could do was rest and that isn’t him.

The GP is coming up in America in a week and a half, Herlings is supposed to be riding the US National this weekend, was there any chance Gajser or Bobryshev would do it?

The USGP, Gajser won his title there last year, will he be able to ride with a bit of freedom and not thinking about points?

Yeah he won’t be thinking about championships, exactly. But I would rather be in the position we were in last year rather than this year. We all know what motocross is, with Tim we had two super years but this sport can always kick you in the teeth and you have to accept it. The objective is to try and win as many races as possible. I’m sure he will be keen to impress in America and race his own race without the concern of what is going on around him so much.

Is the USGP important for the manufacturers, there seems to be a greater push for the race this year with MX Sports this time around?

It is but it is always important to do well at any GP. America have got their own scene which is closely followed so it’s important but it’s no more important than it was in Sweden last weekend. But it is different on that continent because their have their own program, that’s where they generate the publicity but when he go they can have publicity from us too and work really closely with American Honda.

Just on that communication with American Honda, how much data is useful for GP racing from AMA and vice versa?

The information is shared so they have knowledge of stuff that is going on here, we have knowledge of stuff there, but the hub is Japan of course. Everything is shared with Japan and they use it in the best way for both sides. If there is something created in Japan we will both know about it too. America have the production bike rule, some of the stuff we have on out bikes we can try and use in racing, but in America they aren’t restricted but they have that production rule.

Just on Tim Gajser, it looks like he will do Monster Cup but is there any chance he will he ride Anaheim or the first couple of supercross races in January?

That’s one of the things we are still looking at. It has always been a dream of his, especially to see his name in the A1 programme, it is something we will look at and we will try and accommodate him with if all goes to plan. Bike preparation for MXGP comes first and what we can fit around that come second. There are a couple of questions still to be answered but it is something we are considering.

On Bobby, I think a lot of us have been shocked he has been let go, was that a difficult decision to do that?

Yeah of course, he has been here seven years with us. To be honest right the way up to almost Lommel we had him featuring in the plan but then a couple of weeks before Lommel the whole market of riders changed so that meant we had to release Bobby so we will look for a young rider to go alongside Tim.

Is that rider finalised?

No not yet, far from it. It’s going to be a young rider we can bring on, that’s what we want because in two years time if Tim says he wants to go to America, that will leave us in MXGP exposed, so we want a young rider to come in and can grow into the HRC way of working and that will be good back-up for Tim. If Tim decides that, whether he goes in the end we don’t know, but there has always been that option for him to go to America, so we have to choose our riders that will be the right age at the right time, it’s all part of the planning.

And Bobby, there is no place for him even on any of the satellite teams?

Well there is some possibilities, but there are so many riders out there without a deal, Strijbos, Tommy (Searle), Paturel, Tixier, Max Nagl, Petrov, it is difficult. Shaun and Tonus are in a good team there but I can’t see there being another spot there for Bobby, it’s difficult.

Is that a problem for manufacturers with U23 rule moving so many good riders to MXGP with good older riders already there, are there enough rides for all of them?

No, absolutely not, the thing is Seewer has his place secured, Lieber he jumped in at Kawasaki where Paturel was pencilled in. So there are three good riders moving out of MX2 but two places and next year if you have six riders come up there might not be any places. It will be interesting to see, they have grown the MXGP class into such a high profile but now is there enough spaces in there for riders moving up?

Should they be permitted to stay another year in MX2? Or should there be no rule? All these questions I’m sure are being asked, if there is no age limit Paturel could have slotted back into MX2 and sit there for a year then maybe MXGP next year.

Just to segway onto your MX2 machine, I believe the 2018 250f will be making it’s debut at the USGP?

That will be really interesting, I have not been to any of the tests for the new bike, but the reports I’m hearing back from the engineers are quite encouraging. Cervillin will ride it in America, Assen, France and the MXoN, it should be interesting, it should be reasonably competitive.

And next year for Honda will MX2 be a more important class in rider recruitment due to the new machine?

At the moment we are still in discussions to look at our MX2 programme next year and nothing has been decided at this point in time. There is potential we have riders ready that we have spoken too and potentially could do something, but the decision on what is internal HRC stuff at the moment, just wait and see!