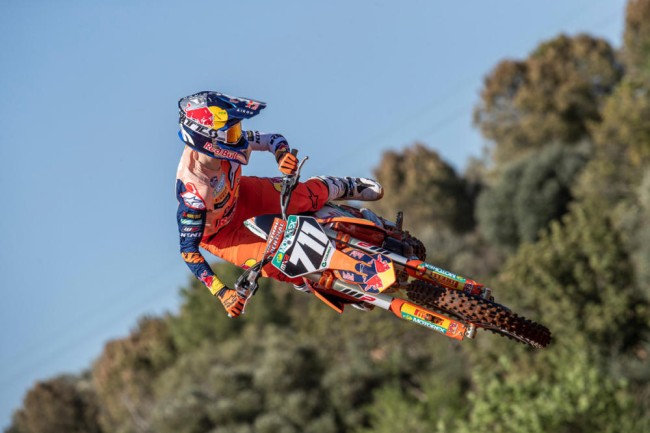 The 19-year old Austrian showed his steely mentality and commitment to his craft by posting top five race results in the first few motos of his Red Bull KTM Factory Racing career at the start of 2020. Hofer displayed the credentials to trouble the MX2 category in his maiden season but the campaign was swiftly ended after the COVID-19 enforced break when he snapped his right upper arm and shoulder in Latvia for round three. After a careful period of convalescence, a revitalised and determined former European Championship race winner is bubbling to renew his attack on MX2 for 2021.

More than any lesson I just gained more experience. I know what’s coming for 2021 and I also know I have the speed to run at the front of the class. It means I can be a bit calmer going into the season.

Was the shoulder injury the biggest obstacle to deal with to-date?

I hurt my pelvis quite badly in 2018 and that was a big one but the shoulder is complicated and not that easy to recover from. It’s a big part of the body and the range of movement means it is not the most stable! It took some time, but I did long days at the Red Bull Athlete Performance Centre and that really helped me with the rehab and to the point where I can ride pain-free. Mentally I don’t have any worries about pushing myself. I’m all-good for the season.

It’s been a long time since you raced a Grand Prix Since when have you been able to ride and train like normal?

The first time I rode was just after the new year. I took it easy for the first month and since the end of February I have been able to ride to a certain speed again. I recently did a race in Italy, for the first time in nine months! It was quite tough. Racing is super-different from training but I’m not concerned. We still have some time to get ready before a busy season begins. I’ll keep working on it.

As a rookie in 2020 perhaps the team did not ask too much of you when it comes to the bike and technical side. Has that changed for 2021? Do you have more input now?

Actually, it’s more or less the same because KTM are really good when it comes to making the race bike very personal and I had that for 2020. It wasn’t the case of me riding a bike that had been made for Tom. It wasn’t like that. I could choose freely, and we have already made some improvements. I believe we have things pretty much sorted on the technical side which means I can concentrate more on my riding. We did frame, engine and suspension testing but it was nothing major because we already had an amazing bike last season.

In 2020 you were an unknown Austrian rookie in the Red Bull KTM Factory Racing set-up. Will there be a little less spotlight and expectation this year?

I think having the results from Great Britain [5th and second moto result of 2nd] and Holland [9th with a first moto finish of 4th] helped before I picked up the injury. They let me know where I was and what I can do. It was pretty good for the mind. I’m calmer than 2020, that’s for sure. Tom has to go for the championship and I think I have a bit more freedom to gain experience instead of having that pressure to always be first. I’m still a little bit of a ‘second rider’ and that means I can go race-by-race and improve during the year. For sure with Mattia [Guadagnini] we have a strong third MX2 rider and I believe we can all meet our goals.

At the end of 2021 what would have been a good season for you?

The first goal is to get a full season in the books and to try and be injury-free. Then I’d like to try and get as many podiums as possible. On my good days I think I can make these results happen. For sure there will be some ups-and-downs but it would be great to get that podium feeling once in a while.