Interview: Raivo Dankers – disappointed to miss out on Dutch title 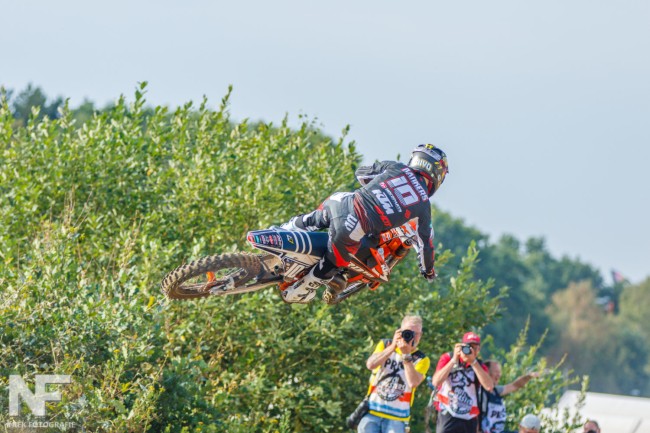 Raivo Dankers has been the next big thing in Holland since he was on 60s and he has continued that progression into the 125 class even if Las season was a bit below expectations.

This year Dankers has shown good speed in the EMX125 series and the Dutch championship but unfortunately for a Dankers he came up just short of winning the home national series last weekend.

Gatedrop: Raivo, a frustrating day for you, you must be disappointed not to win your National Championship?

Raivo Dankers: Yes, of course. I was hoping to get the championship but I threw it away pretty much in the first moto. I had a good start but I made a mistake in the first corner and then I came off the bike with both legs. I started from third last or something but I rode back to seventh which wasn’t that bad. Then in the second moto I didn’t take such a good start again, I got back to second place so I was happy about that. I was six points short to get the championship, I’m pretty disappointed about that but it is what it is. I am looking forward to Lommel now.

Gatedrop:  Despite missing out on the title, you had a DNF in Markelo earlier in the season. With there being only eight moto’s are you a little surprised the championship was so close in the end? On a positive note the speed was good, the DNF cost you!

Raivo Dankers:  Yeah of course, I had 1-0 in Markelo. If I didn’t have that I’d probably be champion right now. But there’s nothing I can change about that now.

Gatedrop:  You’ve spent most of your career with the HSF Logistics team but they obviously stopped this year. You’re now racing with your own team, has it been tough making that change?

Raivo Dankers: Yeah, we got to know pretty late in the season that HSF stop with the team. We had to make some plans really quick and I came out with my own team. It’s quite nice because I’m the only rider and just with my parents. I don’t have to look to other people. For somethings it’s nice and for other things it’s better to be on a team.

Gatedrop: How’s the bike compare to the HSF Logistic bike you had?

Raivo Dankers: Yeah, I got my bikes just from last year with KTM, I have a contract. The bikes are pretty much the same as last year’s so there’s not a big difference in the bike.

Gatedrop: What are your expectations for the rest of the season?

Raivo Dankers:  There are some sand races coming now, the next one is Lommel so I am really looking forward to that one. I like that track, it’s deep sand and that’s what I like. We hope to get a podium.

Gatedrop: You’ll race the Junior World Championship later in the year, are you looking forward to going to Australia and have you been overseas before?

Raivo Dankers: I’ve been to the USA one time but I’ve never been to Australia before. I’m really looking forward to that, I’m going to do the best I can over there.

Gatedrop: You’ve confirmed you’ll race the EMX250 class next year, have you had much bike time on the 250 yet or will you save that for the winter?

Raivo Dankers:  Last winter I went to Spain and rode the 250cc. I made some laps there on it and I enjoyed it. I think it’s a good bike for me and we will see next year.

Gatedrop: For your first year in the class will you put any pressure on yourself or just take it as it comes and use it as a learning year?

Raivo Dankers:  We will see what the races bring us, I am going to do my best. I will gain some experience on the 250, we will see how it goes and I am looking forward to it.