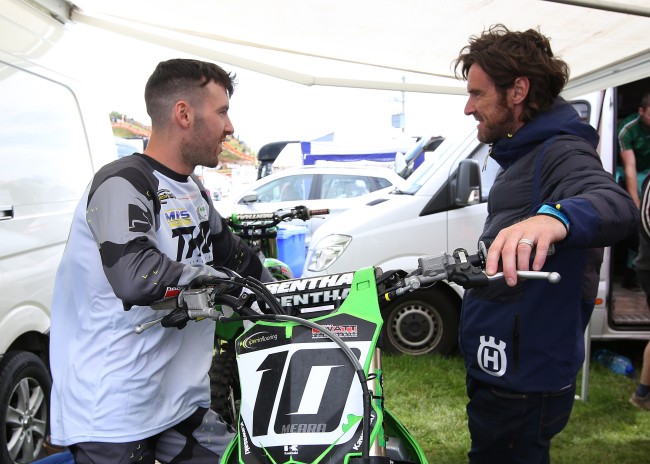 This year it’s not going to be an easy pick for the Irish Motocross Des Nations team. During round five of the Maxxis British Championship at Desertmartin, it was a a good chance for team manager, Philip McCullough to watch 8 out of the 10 riders up for selection.

It was a good day for all the local riders as many of them impressed. It’s now up to McCullough to decide the three riders who will head to Assen to compete for Ireland on the 28th and 29th September.

We caught up with McCullough to get his thoughts on Desertmartin and possible picks for the Des Nations.

Gatedrop: Philip, Desertmartin just hosted round five of the Maxxis British Championship. What did you make of the racing and the event?

Philip McCullough: The event was a superb success and a great advertisement for motocross racing in Ireland, congratulations to Billy, Marlene and the Cookstown club for hosting this event once again at the very highest standard possible, no stone was left unturned by the club in the preparation leading up to the event and on race day.

Gatedrop: Jason Meara had a superb first moto coming home in third – the best race of his career. What was your thoughts on his performance?

Philip McCullough: Jason Meara pulled off an amazing performance and result in race 1, just when it really mattered.  I’ve been to several MRA Ulster and Irish championship races this year, obviously to watch him and certain other riders race, especially in sandy conditions. Another reason for being there, and also very important, is to see how they not only perform on track, but how they conduct themselves off the track.

Jason showed super determination and put on a great display of riding in race 1 claiming the final podium position. He was unfortunate to fail a noise test after the second moto and was then docked 5 positions, evidently dropping him from a possible 5th place overall finish.

Gatedrop: Stuart Edmonds has had a difficult start to the season but was strong at Desertmartin. You must be pleased with his results and speed?

Philip McCullough: Stuart started this season coming off the back of a nasty injury prone 2018, his speed and results are starting to get back to what we all know Stuey is capable off, his technical ability on the bike is at a very high level, I have watched him closely over the past few months practicing at my facility in the deep sand and would say he’s probably riding as good as he ever has. He had a strong race 1 finish coming home in 5th place, again like Jason and John Meara his second moto finish wasn’t just as strong but still had an 8th overall on the day.

Gatedrop: The first MX2 moto was a bit like an Ulster Championship with a few fast wildcards. The first 5 laps Glenn McCormick and Jake Sheridan were right there along with Martin Barr!

Philip McCullough: Martin, Glenn and Jake were very impressive in the MX2 class. Martin, as I have said before, is a class act, at 31 years young he still has an incredible work ethic and prepares and conducts himself like the true professional he is.

A 3-4 scorecard for him on the day proves he still is able to perform at the highest level, his butt patch ‘old but gold’ sums him up perfect.
Glenn and Jake both showed that they can perform on the big stage at British level, when they gain a little bit more experience and consistency I have no doubt both will be top 5-10 place finishers every week.

Gatedrop: What other local riders impressed you on the day?

Philip McCullough: Every home rider that lined up at the start gate on Sunday did themselves proud.  James Mackrel was unfortunate to pick up an injury at the Irish championship round the previous week, his injuries are actually a lot more serious than first diagnosed, so fair play to him for even lining up as he did, no doubt ‘the fish’ will bounce back from this even stronger and with the raw speed and ability he possesses he without a doubt could have ran at the sharp end in the MX1 class.

John Meara had a great race 1 result crossing the line in 7th place. His race 2 result wasn’t maybe just as good as he would have liked but nevertheless we have to remember he was racing in real good company and battled through the 25min + 2 lap moto to a very creditable 13th place finish.

Luke Smith had a great qualifying session earning him a 9th place gate pick. I have no doubt he would been expecting a better race 1 result but still had a fairly decent ride coming through from the back of the pack to claim 14th spot.

Jordan McCaw had 2 good point scoring finishes and we can’t forget about Stuart Nesbitt, I read a comment that he’ll take great satisfaction from where someone said he ‘beat Shaun Simpson in both motos’ (laughs).

Gatedrop: Gary Gibson is racing AMCA this year and because of that we haven’t got to see his speed. Obviously, he done well at RedBud last year but picking him whilst not seeing his speed might be a bit of a risk?

Philip McCullough: Gary performed excellent for me last year at Red Bud on a new machine he had never seen or ridden, prior to landing in the USA. I have watched Gary riding at Magilligan MX Park a few months back, his switch to KTM machinery in 2019 has seemed to be a good 1 as his raw speed is phenomenal, again Gary has great technical ability in the deep sand and along with his super smooth riding style is great to watch and his lap times proved that.

It’s unfortunate his schedule hasn’t allowed him to compete in an Ulster or Irish round this season yet, although like all the riders in the mix, I did have conversations with them at the beginning of the year and told them they needed to race on home soil so I can gauge their speed against each other. I know what Gary is capable of and he certainly would not be a risk if he is selected.

Gatedrop: Obviously, the Des Nations team won’t solely be based on that event alone, but have you got a team in your head now after that? It must help with your selection..

Philip McCullough: Desertmartin was a great opportunity to see 8 of the 10 riders that are still in my plans, as you said my final decision won’t be based solely on that event alone.

Martin Barr, if he remains fit, will definitely be at Assen riding for Team Ireland come September – that is a cert.

As for the other 2 places, yes I have 2 names in my head and I have 3 reserve riders also, that’s not to say that the situation or circumstances may change before the Team is announced in mid July.

For anyone that isn’t aware how it works, I have to give my Team recommendation to the MX Commission and after their consideration then the riders will be confirmed. In my 4th year as Team Manager the MX Commission have agreed with my selection 100% each time.
I am proud to say that each year the riders I have selected have gave their all as well as representing Ireland to the best of their ability, no doubt this year will be no different.

‘wouldn’t like to be in your shoes’ ‘tough decision for you to make’ ‘you’ve the hardest job in motocross this year’ ‘you’re not going to be popular when you pick the team’…
I relish these kind of comments that people have said to me in recent weeks, although some of the comments and people’s opinions on social media are quite amusing to say the least. Yes, I am Team Manager and all the fingers point at me.  My job is to have Team Ireland represented as professionally as I can, on and off the track at the MXON, that’s exactly what I will do again in 2019! See you all in Assen.