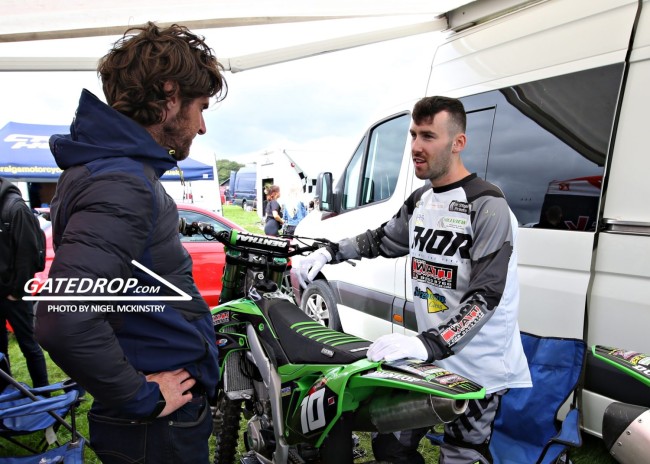 What did he mean by that? We decided to catch up with him to get his thoughts on it as well as discussing his rider selection.

Gatedrop: Philip, the Irish team was announced last week of Jason Meara, Martin Barr and Stuart Edmonds. Overall just how tough of a decision was it to select the team this year with so many of our riders performing well?

Philip McCullough: There has been quite a few riders really stepped it up this year, Jason Meara being the prime example of this, but realistically it wasn’t that tough of a decision when I had to select the 3 riders. I have done my homework all year, attending every sand race possible at home, analysing lap times from the British championship races and so on.

Gatedrop: Did you consider putting Barr on a 450cc with another rider in MX2?

Philip McCullough: I spoke to Martin in depth about the possibility of this happening several months ago, it wasn’t going to be possible so therefore that wasn’t even in the equation once we evaluated the situation.

Gatedrop: With Barr in MX2, did you think about putting Glenn McCormick on a bigger bike – a 450cc or a 350cc?

Philip McCullough: Honestly, I never even considered putting Glenn on a 350 or 450 machine. He doesn’t practice or train on any machine other than a 250, so it didn’t even cross my mind. I have several other real good 450 riders at my disposal so Glenn was never going to be an option on the bigger capacity machine.

Gatedrop: After Gary Gibson performed very well at RedBud last year. How did you make the decision to leave him out for Assen?

Philip McCullough: I have been in contact with Gary on quite a few occasions this year, if Gary had been able to come over to compete at home in the Ulster or Irish championship, or even the British round at Desertmartin and performed like I know he is capable of, then the situation might have been different. When I contacted him last week to inform him he was reserve this year, he took the news gracefully and totally understood the situation.

Gatedrop: When announcing the team you posted a message, “you cannot mix politics with sport”. What exactly did you mean by that?

Philip McCullough: Basically and to simplify what I mean is this – if any rider has showed the speed, conducted himself in a mature and professional manner, on and off the track, it is totally irrelevant if he is from north or south of the border, if you’re fast enough, while I am Team Manager then you will be in my line up. My team was selected on ability not borders!

Gatedrop: I’ve heard the Southern Centre wanted to select Jake Sheridan instead of Martin Barr and you had to fight for Barr’s selection. No disrespect to Jake, but to me that is just crazy as Barr is the best rider from our country hands down and also does a lot for the sport, you couldn’t leave him out the team!

Philip McCullough: As I’ve said, politics will not be part of Team Ireland’s selection as long as I’m in the managers job. Jake Sheridan is a great young rider, he has made a lot of progress past few years and no doubt will ride in the MXON for his country at some point in his career, but to put him ahead of Martin Barr this year was never an option for me.

Gatedrop: As a team manager, how does it feel when you present a team and the panel try their best to change it? It must not be a nice feeling because as team manager you should be trusted 100% to pick the team in my opinion.

Philip McCullough:  I have been around the motocross scene for over 35 years now, I believe I have the experience and knowledge to know who will represent Team Ireland in the best way possible. This has been the first year that my proposal was questioned, but it’s very ironic that the day after the commission meeting I received emails from members who opposed my recommendation, saying that ‘after reflection the best team had been picked and was going to Assen’.  I stood by my beliefs and as I’ve said, I picked my team on ability, performances and experience.

Gatedrop: With so much politics involved, is that something you’re hoping to change?

Philip McCullough: In my role as chairman of the MRA and also Team Ireland Manager, I certainly will not let politics creep into the sport I love and am so passionate about, there is no place for it within motocross, that’s the bottom line.

Gatedrop: If in the end you didn’t get the riders you wanted. Would you have you considered your role as team manager this year? Are you still committed for future years as well?

Philip McCullough:  If there had been a reasonable and justified argument against my Team selection, I certainly would have taken more consideration to it, but this wasn’t the case. For sure if it had been the case that I wasn’t able to take what I thought was my strongest team possible, I would have 100% stood down as Team Manager and I made that point very clear, after all, who does everyone point the finger at if any team doesn’t perform, it’s always the Manager that gets the abuse.

My commitment to this job has never been in question, I actually have got more passionate since I started the job in 2016.  Each year I try relentlessly to lift the profile and image of Team Ireland at what is the most prestigious event on the MX calendar.

I know my 3 riders Martin, Jason and Stuart are as committed and passionate as I am, I have a great relationship with the 3 lads, that alone makes my job easier and more satisfactory knowing they have my back as much as I have theirs.

Gatedrop: On Assen, what’s your expectations for team Ireland this year?

Philip McCullough: Assen is going to be tough, really tough in fact.

Martin and Stuart have ridden the man made circuit previously and no doubt this will benefit them greatly. Jason has been spending a lot of time at my Track perfecting his ability to ride in the deep sand with his results and performance of late showing this. It’s always nice to progress straight into the A-final and this is the first objective myself and my 3 riders want to achievement on Saturday. On Sunday however, and with 100% determination and grit, which I know I will get from Martin, Jason and Stuart, I have no doubt we are very capable of another top 15 overall result, with Lady Luck on our side we could even be knocking on the door of a top 10 result which would be an incredible achievement for everyone involved!