Interview: Adam Sterry on a tough Lommel, getting a podium, MXGP & MXoN 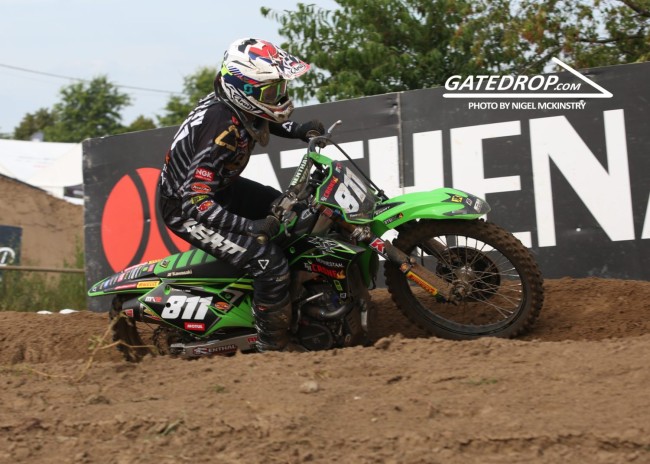 The last two rounds of the MX2 World Championship, Adam Sterry has missed the podium by a point – he’s definitely showed that he deserves a podium.

The F&H Kawasaki rider will age out of the MX2 World Championship in 2020 so it would be nice for him to get on that podium before the end of the series.

Despite not getting on the podium this year, the Brit is quietly having a good season – his best ever in MX2 as he sits sixth in the World Championship.

We caught up with Sterry to get his thoughts on Lommel, getting a podium and much more.

Gatedrop: Adam, overall a very tough track here in Lommel. You rode really well and even though you were fifth overall you missed out on the podium by one point again for the second week in a row. That must be disappointing but overall the riding and speed is good..

Adam Sterry: Sure, I am very disappointed after the second moto today. In reality I can’t really be too disappointed. I rode good all weekend and last weekend in Loket I rode really good. I just needed a bit more luck, I crashed with Henry (Jacobi) in the second race and that ruined my podium chance. I will take the positives from it and then try again in Imola.

Gatedrop: How did you find the track, obviously it was brutal out there but did you enjoy it even though it was so rough?

Adam Sterry: Sure, this is one of my favourite GP’s with it being so tough. I think for sure if this wasn’t the roughest then it’s definitely one of the roughest Lommel’s we’ve had. The second race was really difficult, especially as it was quite hot for the second moto. Now we have some time to rest then we will come out prepared for Imola.

Gatedrop: Was it nice to race a rough track again? I feel like Youthstream are doing too much track prep this year meaning tracks aren’t getting as rough as they used too although this weekend they didn’t do as much which was good – what’s your thoughts on the track prep?

Adam Sterry:  It was nice to ride a track again were you actually had to think about stuff and not just take one line. I actually used a lot of different lines which was good and the same with Loket, there was many different lines.

Regards to the track prep this year, I don’t feel it’s been that good if I’m honest. There’s been way too much water, dangerous watering, it creates one line – not great racing and injuries. That’s what’s happened this year with a lot of injuries, a lot of one lined no passing racing. I think that’s something they need to work on.

Gatedrop: I feel like your starts have been much better the past few GP’s, just how important is it to get a good start in MX2 as the top ten are all just on it?

Adam Sterry: The start is the most important part of the race. If I get a start then I know I can run the top speed which is what I’ve been battling against all year. With my weight on the metal gate, it’s so difficult to get a good start. The last two weekends I’ve got good reactions and good starts so that’s helped a lot. It’s just nice to be battling at the front every weekend being in contention for the podium. It’s nice and I’ve stayed injury free so that’s good. I’ve scored points in every single moto and I’ll be trying during the last rounds to finally nail an MX2 podium.

Gatedrop:  Yourself and Olsen, I would say are two of the bigger guys in MX2. It must be quite frustrating riding with the likes of Vialle and Prado who are really light and can get the starts etc?

Adam Sterry: It’s really frustrating but there’s nothing I can do about it. I am at the lowest body fat that I’ve been told to go. What can I do? I followed Vialle in the first moto today and they just pull so much out of the corner. I come in and use so much energy over the bumps to gain the speed back and catch him again and I come out of the next corner and they’re gone again. That’s tough but that’s the cards I’ve been dealt with, we are just going to try to do the best with what we’ve got.

Gatedrop: Out of the tracks left on the calendar, which ones are you looking forward too the most?

Adam Sterry: Out of the ones that are left there’s none really that ring a bell but Sweden I guess I really like. I got my first EMX250 race win there. That I will be happy to go back too, Imola, I’m not so keen on but to be honest if I get a good start I can ride good at all the tracks. Hopefully I can get out of the gate.

Gatedrop: Just on the Motocross Des Nations, you’re in contention for team GB. Just what would it mean to you to represent your country in Assen? Even though you rode really well today it must be frustrating that Watson got a podium and you missed out by a point..

Adam Sterry: Sure, for the Nations spot, it’s going to be a fight between me and Ben (Watson) I think. We spoke to Mark (Chamberlain) today and yeah, it’s between myself and Ben I think. I’d ride a 450cc if it came to that, whatever it takes, I’d ride whatever. The Nations has been a dream of mine and I’d be really happy if I got picked. Also, I’m happy and supportive of whatever the team is, you know? I think that’s what a lot of people need to realise and not slag other riders off in the comments. Just support whoever gets picked and hopefully team GB can get on the podium again.

Gatedrop: Just on next year, are you worrying about a ride, there’s a lot of guys looking MXGP rides and maybe not enough teams. Have you had any talks or anything yet?

Adam Sterry: Sure, I am speaking to people but it’s difficult. There’s a lot of people going up, there’s more oversea GP’s so teams need big budgets. At the moment I have nothing but hopefully out of the people I’m speaking too I can sort something out and hopefully I can be back in MXGP next year.

Gatedrop: Have you done much riding with the 450cc in the past and is that a bike you like?

Adam Sterry: My style and with my weight, for sure it’s better on the 450cc. I am actually looking forward to riding the 450cc for many years. I’ve been an MX2 rider so not done any racing on the 450cc but I can’t wait to ride one, it suits my style for sure.

Gatedrop: British fans would like to see you back racing the MX1 British Championship next year. Is that something that could happen or are you happy living in the Netherlands and staying there?

Adam Sterry:  I mean, it would depend on the situation with the team and stuff. I’d like to be back in the UK, for sure to ride the British Championship and be with the British people. That I would like but it all depends on the team and what situation is best for me to get the best results.