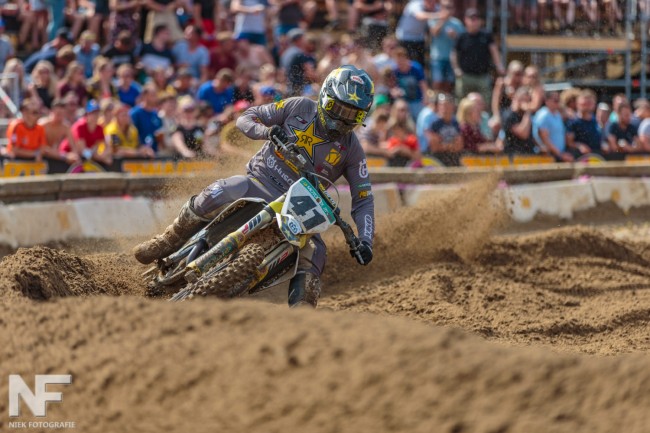 Pauls Jonass is only a rookie in the MXGP World Championship and due to injury didn’t have the best preparation for the season. However, the Ice One Husqvarna rider is improving each and every GP.

Jonass has already been on the podium once and if it wasn’t for a crash in Indonesia he’d have been on the box there too.

The ex MX2 World Champion is one to look out for as he gets more comfortable on the 450cc and racing the tough MXGP class.

We caught up with Jonass after the final round of the Dutch Masters to discuss a range of topics.

Gatedrop: Pauls, overall you probably wanted more from today but I thought it was a solid day for you. Can you talk me through your races?

Pauls Jonass: You know, for sure I wasn’t riding even close to how I’d like to ride and how I can ride.  It was the first time I’ve came here and I was let’s say, a bit scared of the track and just played it really safe. I didn’t want to make any big mistakes and since Indonesia I haven’t 100% recovered. I still have a bit of jet-lag and I’m always feeling quite a bit tired during the day sometimes. Now I just need to take it easy for a few days and recover for Loket. Those are the most important races and I’m happy to walk away from here safe but for sure it was a good training. Every race is also a good training, the track wasn’t so bumpy but it was sketchy with the fences close to the track and everything. I would say it was quite dangerous but that’s Motocross and that’s racing.

Gatedrop: As you said it was your first time here, what’s your thoughts on running a massive festival with a Motocross race. Do you think it’s good for the sport or maybe not?

Pauls Jonass: Yeah, you know I think it’s pretty cool. There are many people who never come to a Motocross but then they come to a festival at the same time to watch the race. I think that’s good and maybe some new spectators will come to the races. I think it would be cool to have a better track and a more spectacular track for the spectators.

Gatedrop: Just on that crash in Indonesia, that was a pretty nasty one with the breaking bump catching you out and you went into the advertising boards. Are you physically okay from that crash or a little bit sore?

Pauls Jonass: I had a nasty kick from the breaking bump but the crash was actually really small. I just slide to the other side of the bank and I was okay. I got up and if I could have started to ride I would have just been behind AJ I think but then the banner got stuck in the rear wheel which is very unfortunate. Luckily I’m alright and you can see from the second race there was no problems.

Gatedrop: You’re obviously a rookie in the MXGP class after moving up from MX2. Just how does the class compare?

Pauls Jonass: Actually the difference is quite big. I didn’t expect there to be such a massive difference. There are 10-15 riders who are really going fast who are battling for each position. In MX2, you know there were 3-4 guys battling and the rest weren’t physically as fit or not as fast. In MXGP, everyone is super fit and super fast. They can go fast for 35 minutes which makes it tough.

Gatedrop: I read in a recent interview you done that setting up the bike is much different too. Just in what way is it different from MX2?

Pauls Jonass: I would not say it’s a lot different but it takes a lot more work to setup the bike perfectly because with the 250cc you go maximum power and the only thing you need to test is suspension really.  Anyway putting 250cc and 450cc power to the ground, there’s quite a big difference. With the 450cc, you can place so much with the engine setup, configuration, the suspension is way more important because you need the power on the ground.  With the 250cc, you can go wide open but the 450cc doesn’t work so easy.

Gatedrop: I feel like you’ve been getting better and better in MXGP. The second moto in Germany you finished second behind Gajser, it reminded me of the year you both battled for the MX2 World title. For the confidence that must have been good to show you still have the speed to be right there?

Pauls Jonass: It was pretty good. I knew before it that I was fast but it was nice to do it for 35 minutes. Actually I would say in Germany, in the second moto when I finished second, it was easier than the first moto when I finished tenth. There it really felt like back in the MX2 days, riding really confident and I felt really good with the bike. It was the same in Indonesia, it felt really good to be up front and you can see how important the start is.

Gatedrop: Just on the rest of the season, what’s your targets? To get back on the box I guess!

Gatedrop: Just on the Motocross Des Nations, it’s been a while since you’ve raced it. If Latvia send a team this year will you do it?