Interview: Nicholas Lapucci on racing EMX250 with a two-stroke and his future – MXGP! 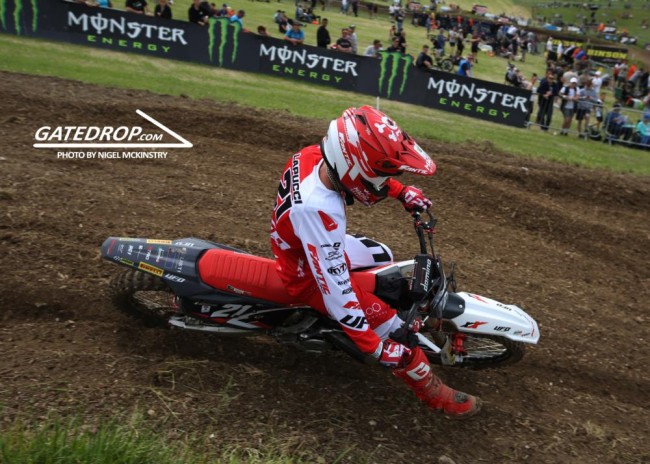 Nicholas Lapucci has had a great season contesting the EMX250 championship and is on the verge of winning the title as the last season takes place on Tuesday. After Arco di Trento, Marco Kamper caught up Lapucci to discuss his race there and plans for the future.

The Italian revealed he will be making the step up to race the MXGP World Championship in 2022 with the Fantic Maddii Husqvarna team.

GateDrop: First race, great start, you a made a mistake, what happened?

Lapucci: In the first moto I had a technical problem that made me tip over the bike. I managed to come back to third place. I didn’t want to make any mistakes, as last Tuesday in the second moto I finished twelve. In the second moto I pulled the holeshot and gave it my best, more than I had, but it wasn’t enough. The two-stroke in these conditions, there is a big gap between the two and four-stroke. I just thought about the championship. Now we head to Mantova, it’s softer and lets see what it brings.

Lapucci: I don’t know, most of the people would say advantage. But it’s not like that, today it was so difficult. In the soft dirt it rides good, really good. Most of the tracks this year are hard pack, so it is not an advantage for me.

GateDrop: This year I went to the mxgp in Oss, a sandy track, you seemed cool and collected. Today both races, but particularly the second, you didn’t look as relaxed, did you get arm pump?

Lapucci: Nah, yeah. It was totally different to Oss (laughs), the rhythm and the dirt, works for me more with the two-stroke. I can push more in the sandy conditions, than today. Second moto I just did my best, Kevin (Horgmo) was faster at some sections. I was loosing a lot with the bike, I felt like it was not about my riding style but mostly about the bike. The two-stroke with the hard bumps and the slick stuff is hard to manage. It was too sketchy to keep pushing, so I decided to back off a bit and manage my race and think about the championship.

GateDrop: Final question, what are your plans for next year?

Lapucci: I will go to the MXGP class with Maddii racing in what will be my seccond year in a row with the team. The feeling with the team is getting better and better after every race and training, so I’m happy to continue with them. I love to work with the team, I really like the people and I feel at home like a family. For me it’s the best team to go to the MXGP as my first full year.