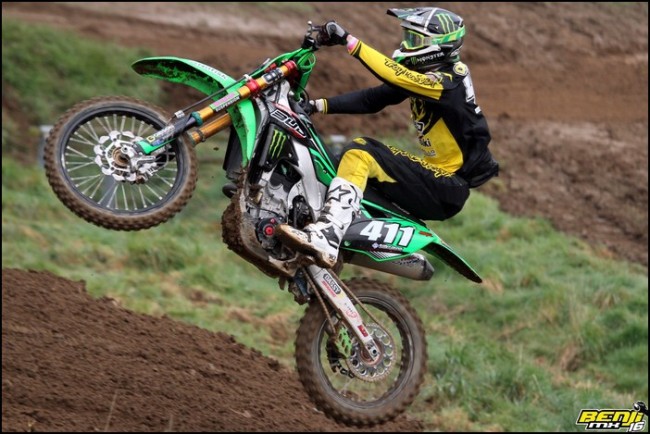 There are two rounds left in the prestigious French SX Tour. This weekend the SX Tour riders head to Geneva in Switzerland for one of the highpoints of the series.  In the SX2 class supercross rookie Nicolas Dercourt (Team GSM) sits currently in seventh, trailing the fourth by only four points. We caught up with the former EMX250 rider.

Dercourt recorded some standout results in EMX250 last year, among them two fourth places in France and Great Britain respectively. For 2017 the young French ace decided to go for an alternative campaign at home. Admittedly the runner-up to 2013 EMX125 champion Pauls Jonass received less attention internationally but Dercourt still keeps on progressing. Under the guidance of former SX-specialist Serge Guidetty the Shot Race Gear is developing into a more complete rider.

From the outside you’d say that French riders seem to be born with the supercross gene.
Nicolas Dercourt: “It might seem like that, but I can assure that’s definitely not the case if you’re from the north like me. Just like in the other western and northern European regions it’s almost impossible to train supercross where I live. So that means I spend more and more time in the south where my coach lives. But it’s worth the sacrifice, supercross is such an exciting new challenge! It’s impossible to run up front straight away if you’re new to SX. For me it’s my first year and it’s cool to see how I’m improving all the time. The difference with the established riders is not that big anymore, I’m just lacking experience and hours of training they have. In the Paris and Montpellier SX races I suffered bad starts. That’s when things become really difficult because coming from behind is so hard on short races and compact tracks.”

You did well in Lyon last week where you finished fourth on Friday.
Dercourt: “That’s right, things suddenly clicked in Lyon. My starts were awesome and I immediately got into a good rhythm. I actually missed the podium by only two meters because the third was one metre ahead of me! At least it shows that we’re slowly getting there. I have the potential and I know that I have what it takes to fight for podium finishes and victories in supercross. That’s what me and my coach Serge Guidetty are working so hard for.”

How did you cope with the transition from motocross to supercross?
Dercourt: “First of all it’s about getting used to a different type of bike, with stiffer suspension settings, different gear ratios. The way I ride in practice is a lot different too. The motos are so much shorter and you really need to be ‘explosive’ if you know what I mean. We’ve been working hard to get better with specific technical obstacles too: the way the track flows in supercross and how you link all of the obstacles fluently together. Timing is a big part of that. Physically it’s about dealing with that sudden rise in your heart rate, you go immediately flatout! that’s why we’re doing a lot og sprints as well.”

How do you look back on your outdoor season in the French Elite?
Dercourt: “I’m a bit disappointed because I finished 4th. I would have loved to win the MX2 title but I’ve been just too inconsistent. I didn’t mark any points in two races because I dislocated my knee in one and disclocated my shoulder in another race. And I suffered an off-day at the opening round in Saint-Jean d’Angély. I only scored three points in the first moto and the second wasn’t much better. Everything becomes much harder if you’re trying to catch up from the get-go. I could have done better but we can’t turn back time!”

Did you miss the international competition and the EMX250 series this year?
Dercourt: “Not at all actually. I think it’s a bit exagerated to be paying a 300 euro entry fee for only two 30 minute motos. Honestly I had a lot more fun during those two French GP’s I did this year (ed. MX2 in Ernée, MXGP in Villars-Sous Ecot). The world championship is absolutely amazing but it’s so expensive to do a full season. Obviously riding a couple of GP’s also helps you to pcik up the pace when you’re racing at home. In terms of the level of competition GPs are so much tougher than the EMX250!”

You entered the MXGP round of Villars-sous-Ecot at the end of the season. Does that mean your future is on a 450?
Dercourt: “That’s definitely the plan. Next year I will be competing in the French Elite MX1 motocross and supercross series, I’ll do a couple of GPs again and I would like to do the Enduropale in Le Touquet as well.”

You managed to score points in your firtst ever MXGP, that must be an encouraging sign!
Dercourt: “Of course but with my body I feel so much more at home on a 450 than on an MX2 bike. Even more so because the stock 450 Yamaha is so powerful already. I can’t wait to get my new 2018 YZ450F in a couple of days! Personally I prefer a powerful bike, maybe because I’m 1 m 85 for 80 kilos. So you understand that things are bit complicated for me on an MX2 bike.”

Thank you for your time, best of luck this weekend!
Dercourt: “Thanks, you’re welcome.”