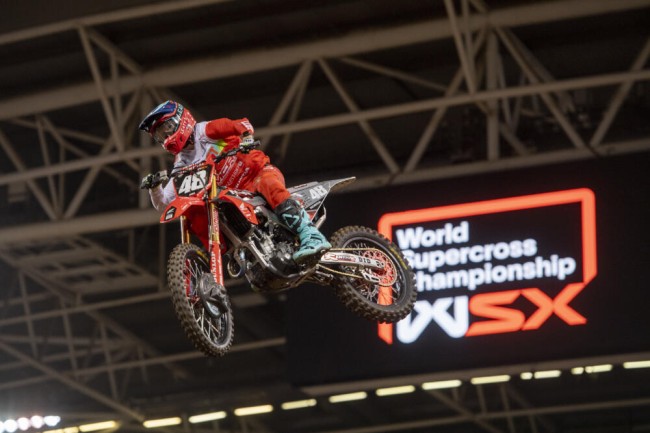 It was a superb night of racing for Mitchell Oldenburg racing the MotoConcepts Honda team winning two out of the three main events in the SX2 class. After a bad start and crash in the second main event it ruined his chances of the overall victory but third on the night still keeps him in championship contention.

We caught up with Oldenburg to discuss his event and more.

GateDrop: Mitch, that was a crazy night, can you talk me through your moto’s? Two race wins and a podium is a good way to start the season…

Oldenburg: It was crazy, I kind of knew what I was getting myself into because I raced Australia back in 2019. I’ve raced a lot of these guys in America and Australia, there’s only a handful of guys that I haven’t raced before. I knew the start was going to be everything. I executed that first one perfect and got away from the chaos and took the win there. In the second one, I got a bad start and when you are back there in the chaos, you have to be smart, and I needed to be smarter than that. Luckily, I was just happy to get the checklist of my body and we were healthy. When I picked it up I knew I wasn’t going to be able to catch anybody so it was a matter of saving my body, saving the bike and save the clutch. Then I wanted to execute that third start and that’s exactly what I did so I got out front, I stayed consistent and smooth. Cole was behind me but I kind of managed it, I pushed but not too hard. I am blown away to end up on the podium for sure.

GateDrop: What was your thoughts on the format?

Oldenburg: Yeah, we did it in Australia and in New Zealand. New Zealand was the first time I had done it, it was a rough night, but I learnt a lot that night. In the Aus-X open I ended up winning that night in 2019. We did three seven lap mains then, so it was pretty much the same thing. It’s all about being goldfish as Ted Lasso would say, I don’t know if you are familiar with that show but us Americans watch it. The goldfish has the shortest memory so being a goldfish and just moving forward.

Oldenburg: For me, I love it. I am a nervous wreck the last couple of years, I have two kids now and priorities change and nerves change. I like to just go in and out and get it done. I get sick on race days now, these guys are laughing at me, I was throwing up before the main show. I am happy to get out of here healthy, a solid finish and looking forward to Australia.

GateDrop: What’s your thoughts on WSX and Supercross going global? I think it’s great for the sport for fans that can’t go to America to see this happen in Wales is great.

Oldenburg: For sure, it has been an amazing experience. They are really working with us, trying to learn and giving the fans the best show that they can. I really enjoyed myself this weekend and up on the podium they played the National anthem. I think it was the coolest thing in the world, we see it in different sports like F1 and stuff. It is kind of surreal and is pretty cool to experience. Even though it wasn’t for me, and it was for Shane, it was cool. The guys are working hard, and I really hope it works out and takes off for them. I hope it can be another series to offer the fans, but I think all of it is positive and we are just looking forward to see what happens now.

GateDrop: Have you ever been to the UK before and if not, what is it like being here in Cardiff and what were the fans like out there?

Oldenburg: No, I’ve never been to the UK. It was actually the first trip my wife and I got to take since we had kids alone. We have had a lot of fun. The people we have met have been great as everyone is super friendly and super nice. We are learning a little bit about you guys’ culture and it has been a good experience. The fans were crazy, the opening ceremony, man you guys were loud. I don’t even know if we have experienced that in America. When Kenny came out and then Max came out being the hometown kid, wow, it was cool. I really hope we get to come back next year, tomorrow we are going to do some sight seeing in London before flying home on Monday. It has been fun.

GateDrop: Just on the track, how did you find it and was it close to one of the more basic AMA SX tracks?

Oldenburg: It was close for sure. The rhythms were close to identical but the turns in America are shorter and harder to carry speed into. I think what these guys are trying to do is create that close racing and bar banging action. In America we have the heat races and LCQ’s but the main events, towards the end of them they kind of get spaced out and the riders are just bringing them home. You can’t do that out here, I don’t even know what Shane did in the moto’s, but he was consistent to get the overall. It was fun and I knew lap times wouldn’t really matter because we were all so close. I mean four tenths of a second is literally nothing between first to tenth place.

GateDrop: For next year are your plans to race WSX again and the AMA Supercross season – no Nationals I assume?

Oldenburg: For me I haven’t raced Nationals in three years so we will do West Coast 250cc, Vince and myself will do that. I am pretty sure everyone on this team is signed up as well so we will be here. World Supercross will be the main focus next year.