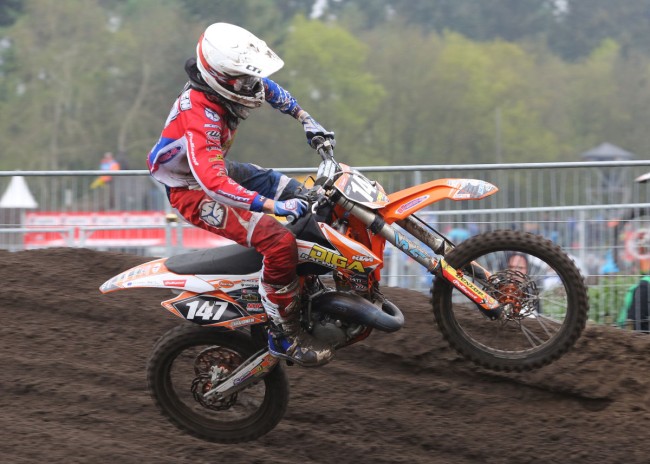 Miro Sihvonen has got some heads turning in the EMX125 class with his sheer speed on board his Diga Racing KTM. He won a moto in Italy as well as the overall in valkenswaard. In the second moto at Valkenswaard he crashed and came from 18 seconds behind Garcia Prado in order to pass him to take the overall win.

The Finnish rider now sits second in the championship standings and only one point behind Prado. It’s going to be a great battle to see who comes out on top of the series. Gatedrop took the opportunity to sit down with Miro and ask him about his first win.

Gatedrop: How does it feel to get your first overall win in the EMX125 class?

Miro Sihvonen: Of course it’s a great feeling because now I have finally proven myself just like I did in Italy last week as I won the second moto.  Obviously I have to thank everyone who has been behind me, all my sponsors, the team as we have been working well, my coach, my trainer but the biggest thanks below to my parents!

Gatedrop: In the second moto you had a crash but then it looked like you were riding angry and you were able to catch Prado and beat him..

Miro Sihvonen: yeah, you know after that crash I was thinking ‘ahhh shit, I’m never going to make it’ but then I just pushed hard like I know I can and I was number one at the end of the moto.

Gatedrop: Italy proves you can ride fast in hard pack as well as sand, you must be happy with your versatility?

Miro Sihvonen:  Yeah, actually I have always known that I am much better in sand so I knew when I came here that I just had to win because I already won a moto in the really hard and slick conditions in Italy.  Before the race last weekend in Italy I actually really hated that track so I am really happy.

A happy Miro as he took his first overall win in the EMX125 class! Pic: Nigel McKinstry

Gatedrop: You signed for Diga Racing, they seem to be really helping you?

Miro Sihvonen:  Yeah, having a team like Diga Racing really helps a lot, not just with results but they just help me out so much. Everything is so much easier now thanks to them!

Gatedrop: Going into the season did you except to be running at the front or are you surprised by your speed?

Miro Sihvonen: Yeah, going into the championship I was always saying that my goal is to win but I always had a small voice in the back of my mind that I might not be able to do it and other guys are also fast so I am happy with how it’s all going so far.

Gatedrop: What’s your main goal for the future?

Miro Sihvonen:  I would like to be at least a professional world championship rider, at the least.