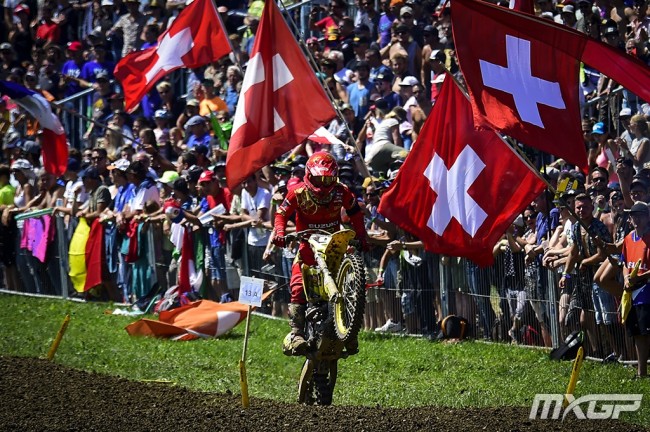 It has been a very good season for Jeremy Seewer even he did just come up on his goal of being MX2 world champion.

Five GP wins and showing speed and aggression never seen before, Seewer will now step up to the 450 class for team Switzerland at the MXoN and then the MXGP class next season.

And Seewer says he loves the 450: “I really loved it,” enthused Seewer. “I always worried a little bit about it because it is heavy and not fun to jump any more, you can’t scrub as big like you can on a 250 because it is super light. it was completely different, I just enjoyed riding it so much, I loved it immediately. I was basically waiting the rest of the season until I could ride on it again! After the last GP, I got back on the 450 and I was happy like a kid and immediately I had a lot of fun. The whole package is there on the 450, I can focus on my riding.”

It appears the Swiss rider should suit the big bike very well with his smooth style and could surprise this weekend at Matterley Basin.

On his battle to win the MX2 world championship Seewer feels it was his starts that made life difficult and ultimately cost him a better shot at the title.

“It’s totally clear it was the starts,” Seewer states firmly. “When the orange and white KTMS and Huskies were always up front and that makes life s much easier. In my eyes I could have won the title with the same starts I had, but I couldn’t make any mistakes and then it would have been possible to not be 40 points behind Pauls. But those starts we had made me make those mistakes because you have so much more risk coming through the pack. You have to fight to win ever moto because you have to pass guys in the last few laps. You are always on the limit and the percentage of risk to make a mistake is so much higher than if you are top three off the start.”

On the MXoN this year Seewer knows Switzerland are capable of a very good result.”If all goes well for sure we can be in the top five again, and if we are all having a good day and get some luck, which you need in racing, we can easily end up on the podium.”

You can listen to the full interview with Jeremy, courtesy of Motocast’s Nicholas Schrøder Hansen, here: