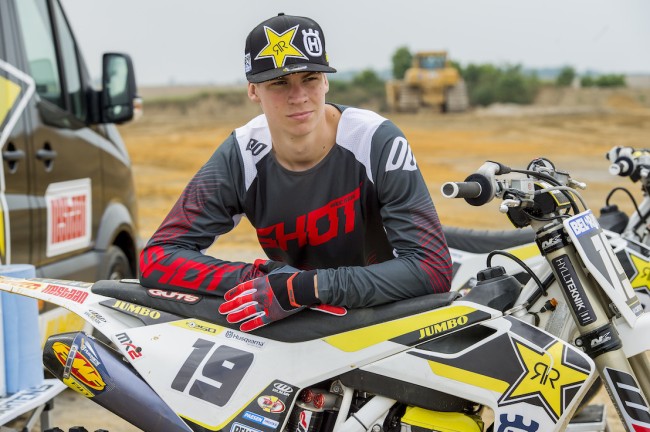 To say that Thomas-Kjer Olsen had a good GP rookie season is quite the understatement. The 2016 EMX250 champion rode his Husqvarna to third overall in the MX2 World Championship, won his first Grand Prix and captured the Dutch Masters of Motocross MX2. We caught up with the 20-year old Dane right before his last challenge of the season, the MX of Nations in England.

Hi Thomas, what you have you been up to since the last GP in France?
Thomas-Kjer Olsen: “Not that much really! I took some time off at home, I took the opportunity to recover before the last big push! It’s been a long season and it’s good to be in Denmark and to get ready for the MXoN here.”

How is it to deal with such a long World Championship compared to the EMX series?
TKO: “It’s definitely a bit of a difference. You’re racing the same guys all the time and it’s 19 rounds. So that’s a lot of racing and on top of that you have the pre-season races, lots of flying especially with the overseas races. Last year I did a lot of races as well with the ADAC series on the side. But the GP series is so tough that it certainly takes more out of you. It wears you out more!”

You started the season incredibly well, as if you had been racing GP’s for years!
TKO: “Absolutely, it was going good in the beginning but at the same time I’ve been doing better than what we had expected for this season. So even when my results were a bit less spectacular at the end I’m not disappointed… Still you always get so competitive! Once you get a win or a podium you want to repeat that all of the time. It was my rookie season and now we have something to work on but I think it was a positive first year for me. And next year is going to be even better!”

How is to race the MXoN together with your brother Stefan. You guys are two thirds of Team Denmark.
TKO: “We’ve been in that situation once before so it’s not new, but yeah it is cool! To see that we are the best in Denmark between us is really nice. For sure it’s something not a lot of people can say. Normally we should make the A final, that’s our goal again. I’m actually not sure about the best ever result for Team Denmark!”

You’re the youngest of the Olsen brothers. When did you notice you’re better than your brother?
TKO: “Probably around 2014. But it was not like one significant moment when I beat him for the first time… It happened more gradually. My brother is five years older too. Growing up it was good to have an older brother to try and beat him. Of course he was much better when I was younger so I always watched him and tried to learn from him. He’s been a huge help!”

How is to race in a team compared to a normal race?
TKO: “Of course I want to go for a strong individual result but in the end it’s a team event. I want the all team to be good. Although I know that we will not make the podium it would be a really good achievement if we can reach the top-10. I want to do best that I can and the same goes for the other guys. Basically you’re still out there on your own on the track and racing by yourself. In that respect it is pretty much the same like any other race!”

What do you think about the Matterley Basin track?
TKO:  “It seems they made some changes for this year but I have been racing in Matterley Basin since 2012. So I’m used to that type of soil and I really enjoy that place. I think with the new layout it will be even better. I’m really looking forward to going there. The jumps are always nice and the Matterley Basin dirt is simply amazing.”

What is it like to race motocross in front of the biggest crowd in the world? The flags, the shouting, the horns, we’re talking about the Olympics of dirtbiking!
TKO: “For sure it’s cool to see that there are so many people watching. I really hope it’s going to be a massive crowd in England too. When you’re racing you don’t see all that much of it. You’re so focused on racing that you don’t notice. Only if they’re really loud, yes than you can hear it but you’re so focused on riding that everything else disappears.”

What was the best advice someone has put on a pitboard for you?
TKO: “I would say the best advice is to ride like in practice because when you ride in practice you don’t think about anything else. You’re only focusing on yourself. You’re a little bit more smooth on the bike normally. It’s easy to get tight in the races. So for me that’s the best advice and yeah to keep it smooth, breathe well and take it easy to keep a good flow. I think that’s the way you ride best. At least I know I do!”

What happens when the Nations is over?
TKO: “I believe we have one week off followed by some testing. When that’s done I have some time off. I was supposed to go on a holiday but I’ll be just staying at home in Denmark. Relaxing, hanging out with my girlfriend. Some other years I actually had a job over the winter but I’m not sure yet if I will do something this year.

Apparently the Danes are the happiest people in the world, so by all rights you should stay at home!
TKO: “Yeah, I did hear that too. I don’t know, I’m happy to be in Denmark and I like my country a lot. I don’t know if we actually are the happiest people in the world but anyway it’s a great country. Come and visit us so you can find out for yourself!”