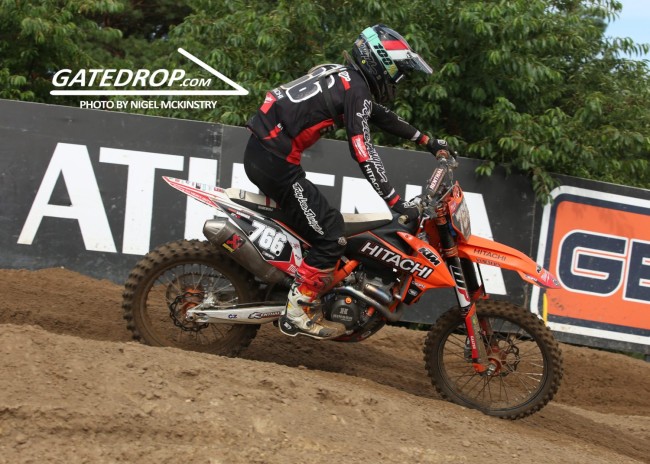 Due to a number of injures that’s hit the Hitachi KTM fuelled by Milwaukee team, they were looking a fill in rider for the rest of the season.

The team decided to draft in Austrian rider, Michael Sandner for the rest of the season starting in Lommel.

Sandner is a rider that’s got a lot of potential but it’s not easy racing the MX2 World Championship as a privateer so he’ll hope to take this chance with both hands to secure himself a good ride in 2020.

Sandner hasn’t scored points in the MX2 World Championship since Matterley Basin but had a good debut with the  Hitachi KTM fuelled by Milwaukee team as he picked up 11 points for eighteenth overall, in conditions that aren’t his strongest.

We caught up with Sandner to discuss his debut with the new team and much more.

Gatedrop: Michael, you’ve signed to race with the Hitachi KTM fuelled by Milwaukee team for the rest of the season. How did the deal all come about?

Michael Sandner: Roger (Magee) sent me an email if I wanted to ride for the team. I jumped at the opportunity to come and race for them.

Gatedrop: You had a good debut with the team, your second best GP of the year I believe. You must be happy with how Lommel went?

Michael Sandner:  Yeah, the GP was very very difficult for me on the deepest sand track in the world (laughs).  It was a crazy weekend. In the first race I was fifteenth and in the second race I was sixteenth. It was a very solid and very good day. The team did an awesome job this weekend and I’m very happy with them.

Gatedrop: Since Matterley Basin you haven’t scored points in MX2 so to score points this weekend at such a tough track is a good start with your new team..

Michael Sandner: Yeah, for me the points are very good. It’s been the second best GP for me and this is in the sand. I am very happy with this.

Gatedrop: What’s your plans after this GP?

Michael Sandner: I’ll go home on Monday morning, do a lot of car driving, then I’ll wash up and the bike. I’ll then put the work in to get ready for the next round. I’ll have two days riding in the week. I’ll do my training – cycling and running.

Gatedrop: I know you prefer hard pack tracks, what are your goals for those races?

Michael Sandner: For sure. I don’t know, my goal is to stay healthy all the season long. That’s the main and best thing for me. I will give my best and what’s coming will come.

Gatedrop: Will Austria send a team to the Motocross Des Nations at Assen and what would it mean to represent your country at Assen?

Michael Sandner: For sure, we will go to Assen with team Austria. Heinz Kinigadner is the team manager. I will go there with Hitachi KTM maybe but only on the 450cc. Hofer will race the 250cc, for the third rider we don’t know yet, maybe Rauchenecker or Neurauter, we don’t know yet.

Gatedrop: Have you done much riding on the 450cc before?

Michael Sandner: Yes, I have. Some days I’ve rode the 450cc, here at Lommel and Honda park. I like the bike very much. It’s good and it suits me.