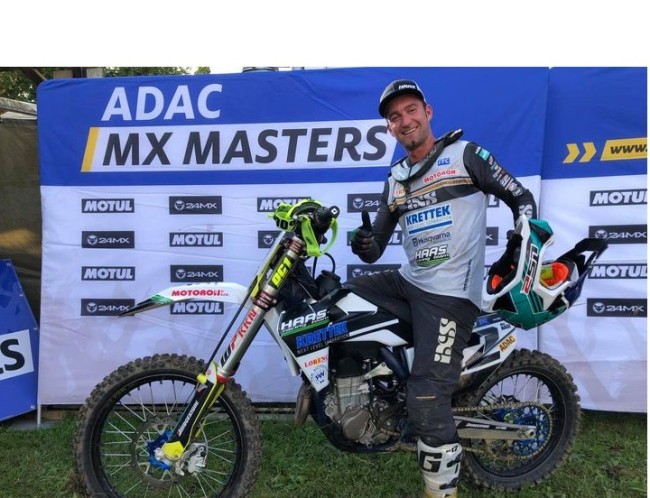 Congratulations on your re-appointment as a rider of MXoN Team Germany! How excited are you to be back in the squad?

Max Nagl: I’m super happy. To my knowledge, Tanel Leok has the most starts at MXoN and I’m already in second or third place. Of course, it’s great to be there again, especially in America, it’s a big highlight for myself, and I really wanted to be there. I liked the track in 2018.

You’re not only a rider but also the team captain. What special tasks does this entail?

Nagl: I have been allowed to be team captain for many years because I bring so much experience from the World Championship and also from the MX of Nations. Among other things, this experience helps in selecting the starting place and deciding which rider should go to the gate first to get the best possible result for the team. I enjoy this role and I gladly accepted the position this time too.

Your teammates Simon Längenfelder and Tom Koch don’t have as much MXoN experience as you do. What can you offer to them?

Nagl: It’s a young team, but both are going permanently in the World Championship. I don’t have to teach them anything, they know exactly what they are doing on the track. I can support them with something around like choosing a starting place or organizational things on site.

After the announcement of the team, there was some criticism that you haven’t competed in MXGP yet this year. Would that be necessary to be competitive?

Nagl: I want to give the best I can for the team. It doesn’t matter much to me whether I’ve already done World Championship races this year. I’ve known the guys we’re racing against at MXoN for years so this is nothing new to me. Also at the ADAC MX Masters I regularly compete against top World GP riders and I also beat them. A race is a race, even if at the MXoN the level will be high of course. At MXoN, the maps are re-mixed anyway, because each rider has a different starting number, clothing and so on, unlike what you’re used to. So you’re basically riding against new opponents.

What are your expectations or goals for Team Germany?

Nagl: The most important thing is that all three riders do not have a breakdown, even though this can happen at any time in racing. Such extreme conditions as last year in Mantova make this particularly difficult, but let’s hope that Red Bud runs somewhat normally. The goal is hard to define. Top ten is definitely doable because all three of us are pretty good right now. Simon finished third place in the World Championship. Tom is getting better and better, both at the ADAC MX Masters and MXGP. He’s at the highest he’s ever been. And also I try to do my best. When things are going well, there’s more to it than the top ten.

What have you set up for your own class?

Nagl: My personal goal is to race with the “big boys” again. I don’t have to prove anything to anyone anymore, it’s just for myself because I haven’t raced an MXGP event this season. Now that’s a great way for me to ride and have fun.

You already know the track from the last MXoN there, what will it matter?

Nagl: The good thing is that it’s rather soft there, albeit not Lommel sand. I like this a lot already. It’s a typical American track: long, wide, fast. I like this a lot. The start is as always the key point, it has to function well. Overall it’s a classic motocross track, I’m looking forward to it.

Are you going to the MXoN differently than a normal race?

Nagl: You try to approach it like every race. But it can’t be avoided that it’s different on its own. The pressure is much higher, the tension is greater, you are more nervous, you want to do your job perfectly. But this is why I try to do my runs like any other race.

Nagl: Normally you have the top three riders from every country at the start, the Americans, for example, are lined up really well this year. It’s a special event and you don’t recognize any other rider. You often find yourself in a duel and you don’t even know with whom. Usually you can see that immediately by the starting number or the outfit, but that’s totally different at MXoN.