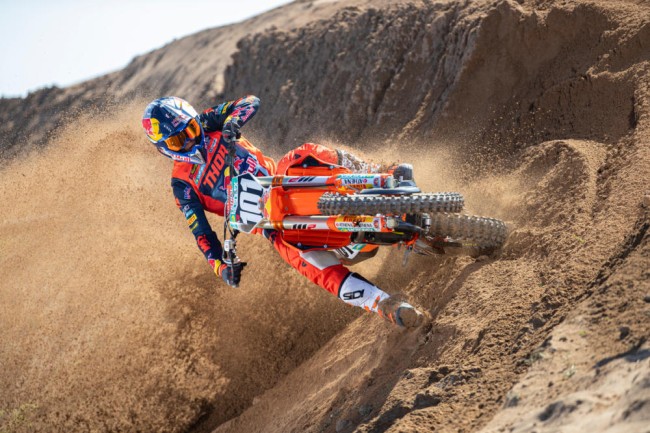 Billed as Italy’s next star in the making, Mattia Guadagnini gets both the best opportunity of his short career as well as to taste the ‘hot seat’ next to idol Tony Cairoli as part of Red Bull KTM Factory Racing in 2021. Guadagnini’s credentials are very promising: EMX125 European Champion in 2019 and EMX250 runner-up in 2020, winning three races in his first campaign on a 250cc 4-stroke motorcycle. The 19-year-old is the sole rookie in the team for 2021 but follows a potent tradition of exciting talent to steer the KTM 250 SX-F. Don’t be surprised to see great things.

Tony Cairoli must be a reference for you as a young Italian racer. What’s it like being in the same team as him?

Since I started riding bikes as a four-year old I always watched him and he was my hero. He’s always been with the De Carli crew and it was my dream to one day be part of the same set-up. I liked Tony for how he rode the bike and how he seemed as a person away from the track. So, to be here riding with him is amazing! Tony is an open person and very friendly. It was strange for me because I always saw him from the outside and never really knew him but now that’s different through our work. We’re spending a lot of time together and with the team and I really like it.

There is expectation that you will be Italy’s next big MXGP star. How will you cope with that pressure and spotlight in your first GP season?

In the last few years we haven’t had a rider that has reached anything like Tony’s level so just being in the same Red Bull KTM Factory team means people will have expectations of me. I know I will have some pressure but I don’t think it will be too much for me, purely because this is my first year and I have to go step-by-step and progress. I think with good work and good people around the results will come. Having Tony as a teammate will help. I want to learn as much as I can and I know the first races will be tricky but then I want to get better as we go.

2021 is only your second year on a 250. How have you found the KTM 250 SX-F factory bike? How is it different to what you have experience so far?

It’s a bit different but you have the familiar feeling that you find on the stock version. The engine has a different character and the set-up is altered a bit, such as the suspension. It wasn’t easy for the first few laps to get a feel for the factory bike but once you change your mindset then it feels so strong and so useful. I felt like I could push more and more. I noticed the difference with the suspension as well when the track was getting more technical. The bike helped you to go faster and faster. It’s something pretty crazy for me. I don’t think I could ask for anything better.

You have the MX2 world champion as a teammate. How will be working with him?

At the moment we have not had much contact because it hasn’t been too easy to move around. His rise from the European Championship to his position is so nice. It shows what can be done when you are with the Red Bull KTM team and in the right conditions. He was the best guy in 2020. He was good before but with that team he became a world champion. It’s great. I only hope I can do the same! He is a good example to follow.

What type of circuit is good for you?

I think I am very good in the sand but it’s not my favourite type of track. I really like circuits like Matterley Basin, with good hard-pack and big jumps. Anyway, the sand is a strong surface for me.

At the end of 2021 what will have been a good season for you?

I think finishing in the top three of the world championship will not be too bad! The most important thing is to show improvement and not feel too much pressure. I know I need to go step-by-step and if I’m near the front in the final rounds of the championship then this would be perfect.