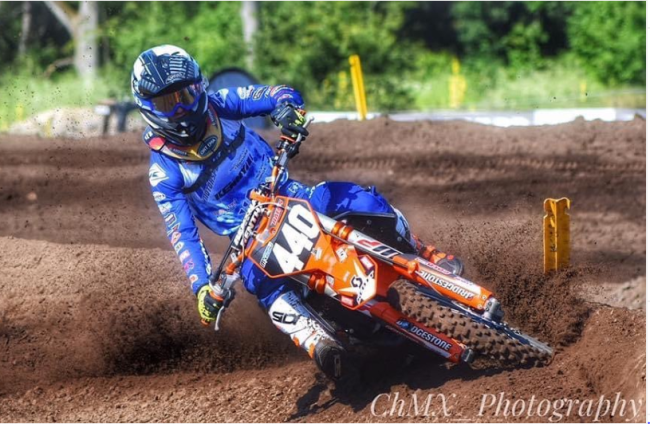 Young German rider, Marnique Appelt has moved up to the 250cc this year after a number of years contesting the EMX125 series – at 18 years old it was the right move to make the step up. At the start of the season, Appelt was a privateer but over the lockdown period was able to secure a ride with the Raths Motorsport KTM team – something he’ll be hoping that will help him with his progress.

Appelt is currently in Latvia where he’ll race three rounds of the EMX250 series in a week but after a long time without racing, Appelt is excited for the next week at the Kegums track.

We caught up with the likeable German to discuss the step up to the EMX250 series, his new team and more.

Gatedrop: Marnique, can you tell us a little about yourself and a bit about your racing background?

Appelt: Well, I’m 18 years old and I live in a little village close to Berlin. I’ve been riding dirt bikes since the age of 13 and I still love it and get excited every time I go riding. Unfortunately, I had a couple of serious injuries during my 125 years and missed a lot of bike time.

Gatedrop: The EMX250 championship finally resumes at Latvia this weekend. How excited are you for the series to restart?

Appelt: Yes, finally we go back to real racing and I’m super excited and I just want to ride my bike.

Gatedrop: The first round of the series was your EMX250 debut – how did Valkenswaard go for you? Can you talk me through your day?

Appelt: Yes, Valkenswaard was my 250cc debut, man I was so super nervous because the EMX250 is another level. It’s crazy how fast these boys are but it went not so bad. I qualified and went 24-23. I’m not happy with it but at this point I was satisfied and I know that I can do a lot better.

Gatedrop: A lot has happened since Valkenswaard – you’ve even signed with a team (Raths Motorsport KTM), that must be a big confidence booster. How did the deal come around?

Appelt: I’m pretty happy that Raths Motorsport gave me the opportunity to focus more on me and my riding and that they give me the best possible options to grow as a racer.

Gatedrop: So far, how has everything been going with the new team?

Appelt: So far, it’s going like I want it too. I like everyone at the team and Niklas has a lot of trust in his mechanics and that is really important – I trust them also.

Gatedrop: You’ve been racing the Raceday Simulation races in Germany, how did they go for you?

Appelt: Yes, I did the Raceday Simulations but the first 2 events were pretty bad. I was struggling with my physical health and honestly I was feeling that I was done, I was pretty exhausted. But I spoke a lot with my riding coach Christoph Selent about the problem and he offered me to take care also about my fitness training. And I can tell you, I feel so much better off the bike and on the bike. The last event was also way better because I felt fresh and good, so I went 3/2 in the mx2 class.

Gatedrop: On the EMX250 series, how’s it compare with the EMX125 series that you raced for a number of years?

Appelt: Honestly I didn’t expect a lot of difference but there is. The boys are riding a lot harder than in the EMX125 class. And also the bikes are so much different, you have a lot more “factory” bikes in the EMX250 series.

Gatedrop: What’s your goals for the EMX250 championships that will take place in Latvia?

Appelt: My goals for Latvia are to have great starts to learn the speed from the top guys, it doesn’t matter how far I drop but it important that I learn the speed. The focus is 100% on the starts

Gatedrop: Looking past that, what do you want to achieve beyond Latvia?

Appelt: I definitely want to have some points at the end of the year.

Gatedrop: What’s your thoughts on the EMX250 calendar for the rest of the season?

Appelt: Well I think it is a good compromise and MXGP made the best out the the year with calendar.

Appelt: I Want to thanks Christoph for his great work and that he is always there to takes care for me. For sure a big thanks to Raths Motorsport for the hard work they did to make it happen that I can go racing in Latvia.