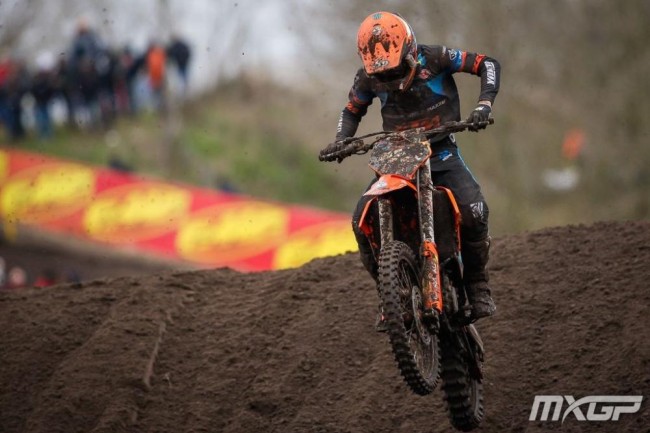 The young Belgian really impressed as he easily qualified and ended up sixth exceeding expectations. In the second moto Everts had a really bad start buried well outside the top twenty but he rode so strong and all the way up to sixth – a sensational ride.

We caught up with Everts to discuss his EMX250 debut and more.

Gatedrop: Liam, your first race in the EMX250 class and you ended up sixth overall. You must be really happy with that, can you talk me through your moto’s?

Everts: In the first moto, I didn’t get the best jump out of the gate. I was around eighth but I got through pretty good and was fourth for a while. I was battling with some guys and Gianluca Facchetti passed me on the last lap so I finished seventh. It was alright, I was pretty happy with it. In the second moto I had a really bad start, I was outside the top twenty but I started working my way through, I was following Florian Lion and was on his wheel. Eventually I think he got a bit tired so I got around him to finish in seventh. With Kay (de Wolf) unfortunately getting a penalty I ended up sixth. For a rider to finish one place better like that, it’s not how you want it but anyway I got sixth overall. I am really happy with it and I will keep on working for Spain.

Gatedrop: Getting a good result after a good start is one thing but the way you came through the pack in the second moto passing a lot of fast riders, that must give you great confidence and what did it feel like passing so many riders like you did?

Everts: I mean it was nice. I just had my pace and I kept on going. In the last two laps I had something left in the tank, some guys didn’t. I managed to get two positions in the last laps.

Gatedrop: You’re still quite small and you’ll get more strength but to get sixth knowing there’s still a long way for you to go, that must give you a lot of confidence for the future?

Everts: Yeah, the growth hasn’t been too good with me. My physical side is good and I’m really prepared. I’m doing a lot on the technique like Jorge Prado did. I just try to look at him, if he can do it, why can’t I? I mean he’s like a role model for me so it’s really nice.

Gatedrop: Out of all the riders there are, why is Prado your role model?

Everts: He’s small, a little smaller than the rest. He still does it, he still wins and it impresses me.

Gatedrop: How did it feel battling with Kay de Wolf in the first moto? I was at Loket a couple of years ago when you were on the 85cc, he was a lot stronger than you then and coming into this year he’s had a full witner on the 250cc whereas you’ve been swapping bikes. It must be nice to see how you’ve improved so much?

Everts: It was alright. Of course, Kay is in a factory team. It was nice to battle with him, he was a bit quicker at the end and well deserved to him, he’s really put the work in.

Gatedrop: Last year there was a lot of talk you’d actually step up to race the EMX250 championship this year, in the end you decided to stay in the EMX125 class one more year. Where you close to making the switch and what did it come down too?

Everts: I mean I was kind of struggling and not that big at the time. If I had to make the decision now, I think I’d have done it the same like I do now. I think it’s nice to race the 125cc, to have some time out front and leading races to have that pressure from behind. I can still do some EMX250 rounds, I think today went really well and Matterley Basin as well so we will keep on working.

Gatedrop: How did you find the track this weekend? It looked rough!

Everts: Yeah, yesterday was worse. today was good actually, I expected it to be a little worse. It was still this boggy sand but it was alright, it could have been worse.

Gatedrop: After the result at Valkenswaard will you now do more EMX250 races than you first planned?

Everts: We will see. Trentino is cancelled (postponed) so we won’t be able to do that )one but we will do Germany and some other ones. I’m already really looking forward to them.