Interview: Kevin Strijbos on his return to form, becoming a father and his future! 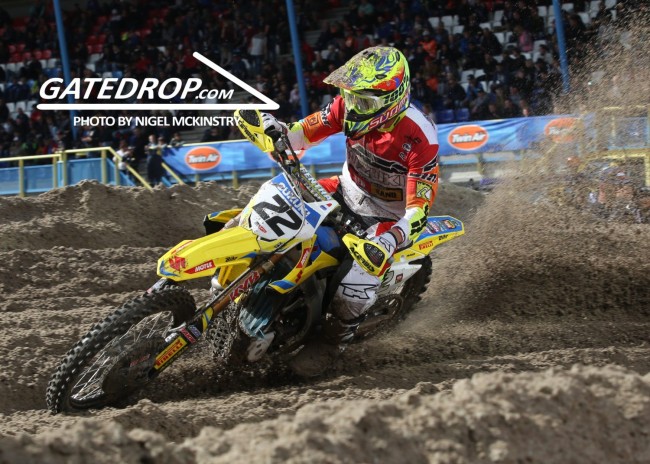 The past few years haven’t gone according to plan for Kevin Strijbos as injuries seem to always halt his progress. This year he picked up an injured elbow which meant he missed five rounds of the series.

After being injured it’s not easy to come back and get the results you expect, especially with the level in the MXGP World Championship being so high. However, during the past few GP’s Strijbos has showed he still has the pace to run in the top five.

As Strijbos reveals in this interview he knew at the start of the season this would be his last year as a Factory Suzuki rider but he has signed a deal for the 2018 season which is great news. With one MXGP round left this year and the MXDN which Strijbos will now ride due to Desalle’s injury, it’s a perfect timing for Strijbos to be finding form as he builds for the 2018 season.

We caught up with the experienced Belgian after the MXGP of Assen to talk about a range of topics.

Gatedrop: Kevin, it was a pretty good weekend for you here at Assen. Can you talk me through your motos?

Kevin Strijbos: Yeah, it was a good weekend. I think the first good weekend actually of the whole season. In the first moto I got a good start, I was quite aggressive in the first few corners because in the qualifying race I wasn’t aggressive enough. After one lap I struggled a little bit for the next two laps and couldn’t find my rhythm. I lost some places but suddenly it came back together and guys started to crash. I was feeling good, the track was really difficult but I ended up fifth which was good, I was happy with that.

Before the second moto we made some minor changes on the shock, again I got a good start but I had a small problem with my goggles. The tear offs snapped every time I wanted to pull one off. It was a shame because I lost some places, I think I was fourth at the start but lost some places because of it. Overall I ended up sixth and it was a good weekend for me.

Gatedrop: Assen seems to get a lot of mixed reviews from the riders in the paddock. What’s your thoughts on it?

Kevin Strijbos: To me, it’s more hate than love (laughs). What can I say, it’s difficult but it’s not a real motocross track. They bring sand here and it’s so difficult with the sand and the feeling with on the bike, it’s not easy. Then again, it’s the same for everybody and in the end, I think the best guy will win, you know? Even if it’s in hard pack track or a sand track like this.

Gatedrop: Last weekend you had a good weekend in America too, particularly in the second moto. Did that help with your confidence coming into Assen?

Kevin Strijbos:  Yeah, last weekend I had a DNF but then I was fifth in the second moto which was good. I had good speed over there, I think it’s coming back step by step. We made some changes before America on the bike which suited my quite good and also now. I’m feeling good, a fifth, fifth and a seventh in the last three moto’s is decent you know?

I’ve always said that when I can take a good start that I will be around the top five. I think I’ve proved now that with three good starts, twice fifth and then a seventh. But yeah, we have one weekend to go so we’ll see.

Gatedrop: Over the past few years you always seem to be getting injured. Just how hard is it to come back and get good results? It must be frustrating and especially with the high level in MXGP!

Kevin Strijbos: Yeah, it’s difficult you know? If you get an injury and then you have to come back again, you have to train whilst all the other riders are always training and getting better. It’s quite hard to come back, we always try to do our best.

Like you say, the level is really high at the moment with Jeffrey (Herlings) and the young guys coming up along with Tony (Cairoli). He’s thirty-two or turning thirty-two, now he has nine world titles which is quite impressive I think considering his age also. Being that age and with those young riders, I’m really happy for him that he got the title.

Gatedrop: Off the track you’ve recently become a father. How have you adapted to that and does it help you with your racing?

Kevin Strijbos: For sure! You know it’s less stressful I think. When you have a bad weekend and then come back to the camper, you see the kid smiling which is really something special. It makes it a bit more easy but it doesn’t mean that I don’t want it anymore than I did or that I get scared or whatever. It just sometimes makes it a bit more easy and it’s nice.

Gatedrop: Suzuki told you earlier in the year that you wouldn’t be with the team in 2018. Obviously it’s never a nice feeling to hear that but the fact they told you early, has that helped you get something for 2018? If you were only to find out now that Suzuki didn’t need you for next year you might have difficulty getting a ride..

Kevin Strijbos: Yeah, I knew already form the beginning of the year. But it is what it is. I had a good time at Suzuki in the past, a really good time! I’ve always been happy when all the guys have been their but now with Stefan, he’s the new boss and he brings new things.

Sometimes it goes good and sometimes it goes bad. It doesn’t work in such a good way for us, we try to do our best and to do good. I think I can say that I’m happy to leave the team. Not the brand but just the team.

Gatedrop: Just on next year, obviously, you can’t say the team. But can you confirm if you’ve signed a deal for the 2018 season yet or are you still in talks?

Kevin Strijbos:  No, I signed last week. So, it’s all good and I’m happy. I am looking forward to that. From my side, I can’t say where yet because of my contract with Suzuki. We will make a press release after the Nations.

Gatedrop: The last time you left Suzuki you had a great year with the Hitachi KTM outfit so it shows you don’t need a yellow machine to be fast! Are you excited for a change of machinery?

Kevin Strijbos: Yeah, for sure. I am looking forward to a new challenge and to join a new team again. Like I said these last two years haven’t been the best but I am really looking forward to another brand and another team with the people around me who also put in a lot of work and try to be positive all the time. I think that’s what I need the most.