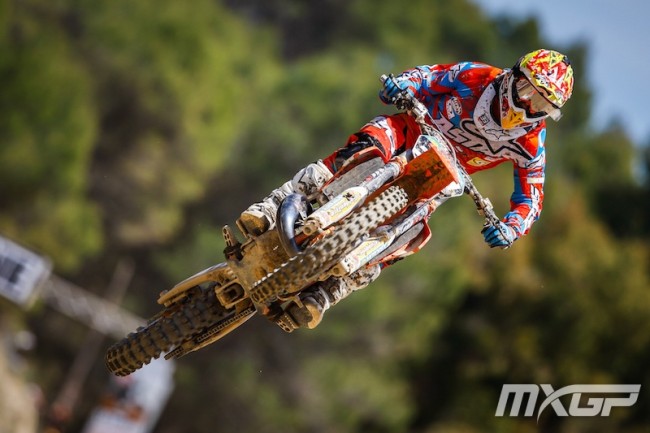 Focused, friendly, driven and determined. Those are the first four words that come into your mind when you first speak to New Zealand’s Josiah Natzke.

The talented Kiwi kid is embarking on his first season in EMX125 and his first full season living away from home in a foreign country. It’s not easy but like his coach Ben Townley, Joshia has the same self-confidence aligned with enough humility to learn, and crucially, the tunnel vision needed to block out all distractions to make it to the top.

Natzke threw his name into the ring of a potential future star last year at Loket in the Czech Republic when he came direct from New Zealand and immediately got on the podium in EMX125. That lead to a fully factory KTM ride in the EMX125 class this year under the guidance of Stefan Everts while also maintaining his close relationship with mentor Ben Townley.

At just 16 years of age Natzke has the right foundations in terms of machinery and people in place to become a future world champion but he knows it won’t be easy and as you will read, is determined to do what to takes it make it.

Gatedrop: You had a close battle all weekend with Prado and came away with a first and second what are your thoughts on the weekend?

Natzke: It was a good weekend, My first two rounds were pretty bad so it was good to put myself in a good situation and do what I did and do what I should have been doing at least in the first round, The second round was sand and I’m not a sand rider yet so that was a tough weekend.

In the second race today Jorge got the holeshot and I didn’t get a great start so he managed to get away on me and pulled a comfortable gap on me at the beginning so i had to work the whole moto, I got close but just wasn’t able to get close enough to make a pass so I was a bit gutted about that.

But the first moto was good, really good. We battled for the first couple of laps and I got hear all my (Prado) fans cheering me on! (laughs). I’ve mixed emotions from the weekend but I’m looking forward to two weeks time at Matterly Basin,

Gatedrop: How did you find the track? It looked a bit one lined?

Natzke: It’s not, it’s a pretty sick track actually, I liked it. It was probably one of the funnest tracks in the series so far and one of the best I’ve ridden. It’s so nice, it’s got real nice jumps, the table tops are quite cool and it’s my sort of track and I liked it.

Gatedrop: Last year you came over at Loket and you shocked a lot of people, you were right up at the front. Were you expecting to be that quick right away and to get your name out there?

Natzke: Well I work with Ben Townley back home for probably the past three years so the plan at the start of last year was to get ready for Loket and I came over a few weeks early to get ready for Loket and world juniors as well. I didn’t really have whole lot of expectation I just wanted to do good. At Loket I had to go to the LCQ and won that but I had 31st gate pick and was way out wide but got a good start both motos and third and fourth for third overall.

I can start from anywhere and get quite a good start which is quite good strength of mine. I qualify so bad, like today I was 20th gate pic. I choose position of condition (of the gate) so it doesn’t really matter. Kiwi’s aren’t very good at qualifying, back home I’m the fastest person by a lot but here there are 20 dudes who are so fast so it’s not easy and I have to fix that qualifying but I am slowly getting better, I was 32nd at the first round, 25th in Holland and 20th today! So hopefully we will get in the top ten or top five eventually,

Gatedrop: How did you find adapting to living in Europe? I’m guessing you have a lot less help that Ryan Villopoto has had!

Natzke: I quite like it, I am here by myself, I am 16 and I don’t have my mum or dad here. I am here for about five and a half months and I live with my mechanic and his wife, they are both New Zealanders and I know them quite well so that’s pretty good but I am a selective eater so I don’t like a whole lot of foods and I pick and choose what foods I like but some of the foods are the same, bread, pasta, meat whatever it is.

Gatedrop: Are you living in Belgium or Holland this season?

I Natzke:  live in Belgium, in Zolder right next to the circuit pretty much, in a little caravan park. It’s good enough I have a push bike so I can get around and get things down on that so it’s a good.

Gatedrop: Just regarding future goals are you looking to be World Champion like Ben?

Natzke: Yeah that is my dream I want to be the best and this is the World Championship. Then I would also like to go to America like Ben did, he won a world championship then went over there. But I have a lot to learn, I am young and I am trying to drink out of a huge pond at the moment and soak it all up and learn everything I can at the minute.

Gatedrop: Is it difficult to take that all in and use what you need and leave what you don’t?