Interview: Jorge Prado talks about his move to MX2 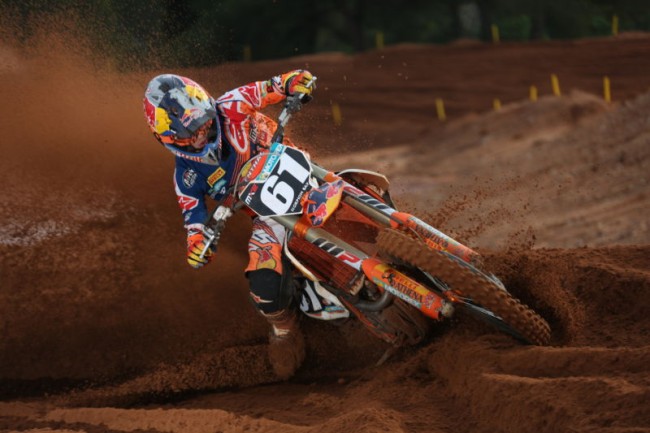 THE MOMENT OF TRUTH FOR PRADO

The Galician rider is ready for his first full season in the MX2 world championship.

His training session has just finished in Riola Sardo

(Sardinia) on the track which next sunday will host the first big race of the season, the inaugural round of the Italian International, marking the summit of the international motocross preseason. He has grown a few centimetres, and is visibly slightly more corpulent, although his face is still a teenager’s and his laugh still belongs to the kid which has shocked the sport’s scene in the last few years, the World’s motocross prodigy.

He is still barely sixteen years old, but he is already facing one of the decisive moments of his career. Working within the structure of the World’s best team (KTM-Red Bull) he faces his first full season racing the MX2 World Championship, and does so with the obsession of arriving to the first meeting in Qatar (February 25th) in the best form possible: “I am happy with the preseason we are doing. In Lanzarote we prepared physically (swimming and cycling) and then we have been on the bike for over a month in Italy, Red Sand (Castellón) and in Sardinia.”

His World level debut racing the last three races in 2016 already left shades of brilliance, such as his third place finish in Assen after winning the qualifying race and leading most part of the second race, but also showed some physical disadvantages to more seasoned riders: “The main objective this year is improving physically, I think I am much stronger than in my best moment last year, and that allows me to go much faster, but we still have a lot to improve. I am working really well with my trainer, Stefan Nausser and it is clear that we are making improvements much faster.”

On the bike, nobody had doubts about his talent, but this is much more appreciable on sand than on hard terrain. He is also conscious of that: “Our track time now is mostly on hard pack because during the season I am in Belgium and Holland and most of my training is on sand tracks. In the sand I am really comfortable, I think I am one of the fastest and in hardpack I am still fast, but there isn’t as much of a difference as in sand.”

He has spent two weeks in Sardinia, concentrated with the whole official KTM team, after spending time in Red Sand and Rome, barely spending any time in his new house in Lommel. “Yes, we have a slightly bigger and more comfortable house, but I’m still not allowed to build a pump track in the backyard (laughs), we also have a new van from Van den Boer Concept, so I’m no longer going to tracks in an ambulance, haha, and now we get there much faster.” He also has not been able to go to school a lot these days: “It is tough to manage the studying, but we are getting along pretty well. I study in the hotel and I take the tests whenever I come back, so far I am getting good grades. It could get more complicated now, but I will try to keep studying.”

His first season at World class level has increased the expectations and he agrees that it is a very important year: “I am taking on MX2 with great excitement, willing to give it all in every race, but keeping calm at the same time. It is a very long championship and regularity will be paramount, finishing every race and trying to avoid injuries.”

Have you set yourself any goals?

“My goal is to finish in the Top 5, and honestly, I think it’s possible because I already got third in Assen and I am very cocky…just kidding! This year is a lot more open because number 84 is moving to MX1 and all the riders are training hard to try to take his place; I believe the average level will increase notably and it will be very hard to be at the front every time, but I trust my good starts and hope to be in a good place physically”

It is also the first time you are fully integrated in the official KTM Factory Racing structure, is it that different to be a factory rider?

“For sure, I have a lot more attention than previous years, I have more support, I feel very well surrounded and the bike is fully factory and that always gives you more confidence, because with a standard bike like last year’s it is really tough to fight against the factory riders. With this year’s bike I can pull off five seconds a lap, haha (joking again)”.

Disappointed with the exit of the Grand Prix of Spain from the World Championships calendar, he would have liked to race in Red Sand at “The First Race” which had to be cancelled due to the weather: “I would have loved to race there, I spent a week training, the track is big and just like a Worlds track. It is a track where they do a great job maintaining the terrain and in very similar conditions to several Grand Prix races. On top of that, they have multiple tracks, of different levels and it is unbelievable what happened last week, as it is almost always sunny there.”

What about the American dream?

“I don’t know, at the moment we are taking things day by day and year by year, so until this year is over we won’t know what is next for me. To race supercross you have to practice so much, have a perfect preseason and by the moment that seems hard. Right now I am focused on the GPs and in my season, and if I end up going to the USA it will only be to do good, already being a World Champion or with a high enough level as well as preparing specifically to race across the pond”.

Is it that different?

“Yes, a lot more than it looks. When European riders go to the USA they don’t do well and when Americans come to Europe they aren’t that fast either. Each place has its tracks and it is almost a different sport so you have to prepare specifically for that. It is hard to compare.”

This year the start gates will have a metallic grid to provide the bikes with more traction, have you already tried the system?

“We have already been training with the metal grid and it is quite different, the feeling changes a lot, you shoot off the gate but the bike lifts when you hit the dirt, although I still hope to get a few good holeshots, as it has gone fairly well so far with my teammate…” (laughter again)

He lives away from his native country, never stops travelling, but is always smiling: “I don’t get tired of travelling although last year in the US I had jet lag, this year will be tough with that much travelling, because there is no time to stay at home. With so much time abroad I keep missing my friends and family.” However, he appreciates the support of his followers on social networks, which are hundreds of thousands, something which excites him without adding pressure. “I never feel any pressure, I love to have so many supporters and in the races it gives me something extra to know that I have that kind of support. I hope this helps to increase the level in Spain, I see many little kids starting to race early and I like that.”

The break is over and Jorge has to get back on his KTM for another practice session. A KTM sporting his number 61 again: “Yeah, with the 61 the bike is way faster, it makes you have better style and just drags you to the podium like in Assen, haha, also, there is a number 1 in 61…”

Jorge Prado, talent and prodigy, 61 on the hunt for number 1.