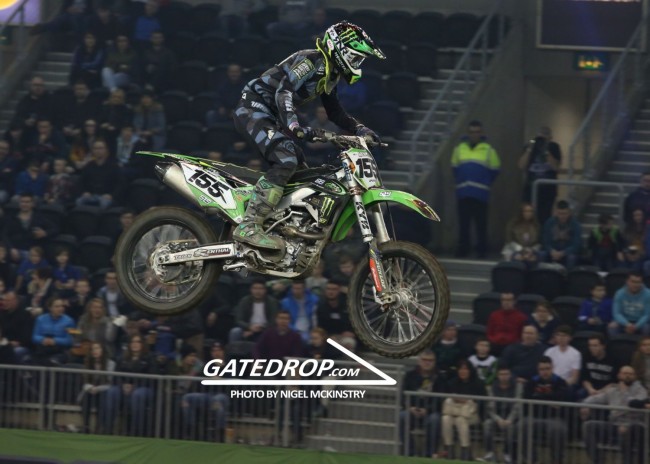 One British rider that keeps supporting and coming back to the British AX series is Kawasaki’s, Jack Brunell. The competition in the class grows every year with some fierce rivalries but Brunell is one rider who is always consistently strong.

Brunell is a steady eddy and rarely finishes outside the top six every weekend. He currently sits fifth position in the series but only nine points behind the championship leader. With two rounds to go it’s all to play for and if Brunell can raise his game then who knows what could happen. A top three championship finish certainly isn’t out of the question.

After Belfast we caught up with Brunell to discuss his British AX season so far.

Gatedrop: Jack, another solid weekend for you, can you talk me through both your nights?

Jack Brunell: Yeah, I got sixth on the first night. I’m feeling really ill so even though I wouldn’t normally be happy with sixth it was a good enough result. Today (Saturday at round five), I felt really really good on the bike. I had the second fastest time in practice and in the first heat race I was second. I crashed on the start during the second heat race so ended up eighth but I got through to the hot lap. I put a good lap in because I felt good on the bike all day, I had the best super pole lap which was good and that gives me more points (three points) for the championship which I need. In the final I obviously had eighth gate pick so I didn’t have a great start. I think I was about fifth or sixth but then I got hit which meant I was last but I got back to sixth. I’m happy with that considering how ill I’m feeling and how the weekend has been. I’m looking forward to the next round now.

Gatedrop: You won a British AX title before but do you think this is maybe the best you’ve been riding considering the competition?

Jack Brunell:  It’s the best I’m feeling on the bike. I just need some luck really, you can’t really do anything about having the cold. I felt fast all day, just need a bit more luck! Everyone is riding really good this year and everything is still so close in the championship. I’m fifth in the championship and I think I’m just seven or eight points of the championship lead (Jack is nine points behind Soubeyras who leads the series) which is like one bad race so I just have to keep pushing away. We have two more rounds to go so we will see what happens.

Gatedrop:  I remember watching you when you were younger and you always crashed quite a bit and made silly mistakes. As you are getting older do you think you are cutting that out now as you mature as a rider?

Jack Brunell:  Yeah, I think so, I hope so. I still obviously do some stupid things but I mean with experience and that you learn a lot of different things. Like I said, with how rough I am feeling this weekend, I am happy with the results I came away with. We got some good points and are in the championship hunt.

Gatedrop: I believe a few years ago you suffered a serious injury and you didn’t know if you were going to be able to race again. To come back from that shows good mental strength, how hard was it to come back from the bad injury?

Jack Brunell: Yeah, before I broke my ankle I was riding the best I have ever ridden. I am probably only getting back to where I am now. It takes a few years to get back to where you were at with confidence and that. Everything is good now so hopefully we can keep pushing to improve.