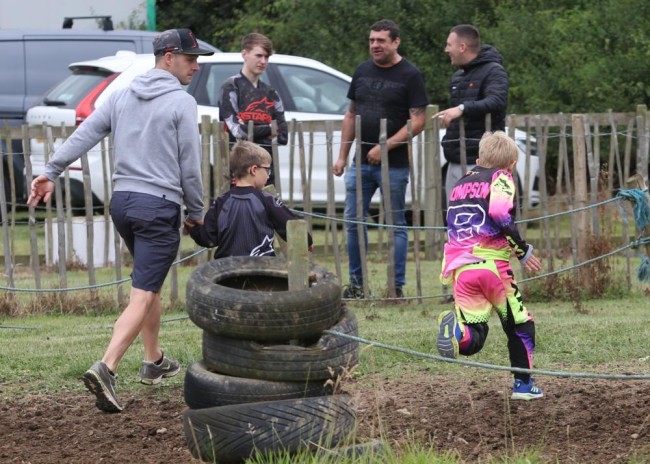 Jonathan Rea wears a lot of hats. Just one week after being the World Superbike superstar at Assen, dominating the event and taking back the points lead in his quest for a seventh Superbike world championship, Jonathan was just another dad at the races being chief mechanic for young son Jake as he takes his first steps in the motocross world.

We caught up with Jonathan at the end of a busy day to talk about his very different role at the races.

Jonathan Rea, schoolboy motocross dad! Pretty different from last weekend! Are you enjoying this aspect of the sport?

Yeah, it’s funny, I am literally texting my ex-team manager Ronald ten Kate who’s son rides in the Dutch championships, I knew him since he was a baby and I text saying I was changing the clutch set-up during the day and I said it’s a bit of change from last week! And it actually just hit home, last week I was riding in front of thousands of people winning a world superbike race and now I’m here at Tandragee and an Ulster championship motocross race with my son, it’s quite a cool contrast.

It’s a cool sport, we are playing around with it a little bit. They are really into football but I wanted to give them the opportunity to ride bikes as well. I mentioned to him a few times on the weekend’s I was off that there was a race on, do you want to give it a try? So this is the third weekend, we did Seaforde Ulster championship, Tinker Hill and then here, so it’s fun. The kids, they are just running around, just playing which is cool.

And you aren’t bothered about them getting into bikes? I know some riders don’t want them to do it!

Yes and no. It’s not a dream…but it would be super cool to say, because I love bikes, ‘we are going to go and ride in Spain for a week, do you want to come with dad,’ when I’m 45/50 years old and that would be cool. We could go to California, that would be a real dream to go and ride somewhere cool with him. For him to have a level and a technique that he’s safe enough to do it, that would be cool. But as far as compeition goes, he enjoys it, I find myself slowing him down a little bit because he is riding fast enough to be scary and he hasn’t much fear! But he just needs a bit more time this is only his third race, so with that will come learning curves.

But he is really into football, he’s part of a wee rangers acadamy and he has been scouted for a few top teams in Belfast so yeah I don’t know if it will be more Windsor Park than Donnington Park!

Nerves-wise are you more nervous watching him or your own races?!

I don’t get nervous really, I just go very quiet when I race. When he is racing I don’t feel nervous but during the race I had this one dad or grandad trying to talk to me at Seaforde. I said: “Don’t talk to me when my son is racing.” It’s not stressful, but you are keeping your eyes on him and you are just blinkered. So now I know what my family go through when I’m racing! On a race weekend I am quiet and do my own thing but they are also different as well because they have anxiety and stress so I understand a bit more of what maybe my dad and mum went through when I was younger.

And people seem to leave you alone here generally – apart from me doing this interview!

It’s about him, it’s not about me so I do have that demenour so I’m busy when I’m busy. People are quite tactful, there is a few people that will ask you for a picture in the middle of a race and it’s like, ‘come on, I’m not going anywhere’ and the chances are I will be back at another race and there will be another opportunity. But it’s nice to come back and support motocross, to come back, be around and see all the kids. I have no interest in getting in the car and going off to watch an Ulster championship race or an Ulster superbike race. So it’s cool to be here and you start to see some talented kids on the SW 85, that was the best racing – all three of them going at it. That’s nice to see that, to see where the next champion from this country is coming from whether that be motocross or make the switch to road racing.

A while ago you got the chance to ride with Jeremy McGrath, everyone from here was probably pretty jealous of you! That must have been a pretty cool experince!

Yeah, he is a super cool guy! We did a helmet swap and rode at that Pala raceway in America. It was super cool, he was so humble, watched Superbikes so it makes the introduction so much easier as oppose to me being star struck!

Where you feeling a bit of that – like, ‘this is my childhood hero!’

A little bit! But he is so cool that he doesn’t make you feel like that. Then three years ago I got to do a bike swap with Clement Desalle, I rode his race bike and he rode my race bike and he is a super cool guy as well. I think you find that, if you can meet these household names or superstars if you like in a calm environment when they are relaxed, they are all good. But when they are working, it is business, you know what I mean? But when you take people away from that you’ll find they are human and they are nice people.

You are still a pretty fast rider (on a motocross bike) have you any desire to do an Ulster Championship race?

I did. I do and I don’t, my contract wouldn’t let me well, my team manager would probably say make your own decision but I couldn’t forgive myself (if he got injured). I do a lot of riding in the off-season with pretty fast riders and I still have a good level. The competition will never leave you, so you always think, ‘awh, if I was racing today where could I be.. at the front or where would I be?’ So it’s hard, yeah!

Finally, World Superbikes, that was a big round for you at Assen, it looks like you took the momentum back or do you even look at it at that now?

No, no it’s a long championship and it’s just race by race. Hopefully I can not make mistakes and I should be there. Toprak is really fast, Redding is really fast, I think everybody will just have their weekends so it’s important the bad weekend’s aren’t disastrous.