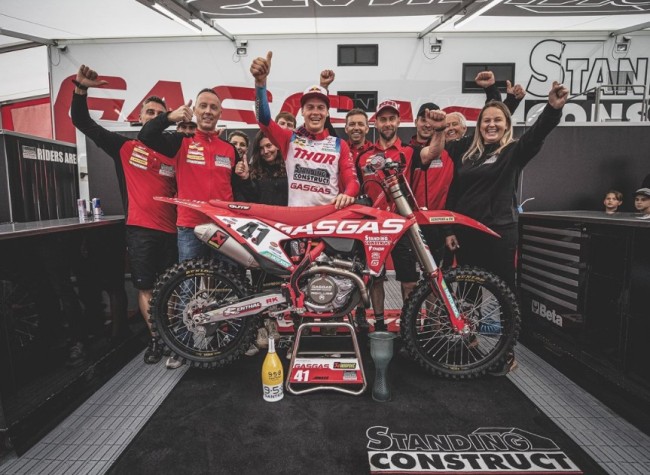 Pauls Jonass posted his first podium finish with the Standing Construct GASGAS MC450F at the Belgian Grand Prix and the former MX2 world champion picked up his first trophy in almost two years after missing most of 2020 with a back injury.

Jonass is the second rider to take the red GASGAS to the MXGP rostrum after Glenn Coldenhoff in 2020 and managed the feat with a 4-2 finish in Lommel last Sunday, which saw the Belgium-based Latvian lead a premier class Grand Prix for the first time and since he jumped into the category in 2019.

“It’s nice to do it at my second ‘home’ GP in Belgium and the home GP for my team,” he said on Sunday. “We’d worked a lot on starts this week because – as many could see – my speed was there this season but I was missing the starts. It is such a tough class that if you don’t get a start then it is really difficult to move forward and to get a podium.”

The 24 year old is 8th in the MXGP standings but his points tally has been dented by two non-scores in Russia and the Czech Republic.

“I’ve been slowly building and getting consistent results, unfortunately there have been a few DNFs this season which have been costly but I’m happy so far.”

Jonass won the Rookie of the Year award in 2019 where he was able to take three podium finishes with the Rockstar Energy IceOne Husqvarna team. He was promptly dropped by the crew for the incoming Thomas Kjer Olsen for 2021 but his contract with the KTM Race Department helped towards the open slot with Standing Construct.

“The Standing Construct GASGAS Factory Racing team believed in me and gave me the chance to be back near the top. Everyone is working so hard; I needed to give this podium to them,” he added in Lommel.

Round seven of the season will take MXGP to the shallow sand of Kegums; Jonass’ home circuit and where he has yet to claim victory. He is the most successful Latvian in the history of the sport and claimed the MX2 crown in 2017 but was a frustrated spectator at the triple-header edition of the Grand Prix last summer. This time he will be back in the fray.

“It’s a nice confidence boost,” he said of his Lommel achievement only seven days before the Latvian round. “I never won at Kegums on the 250. I made the podium a few times so I hope there will be many fans and I can be back on the box.”