Interview: Joel Smets on Jorge Prado – his talent is on the level of Herlings, Cairoli & Roczen! 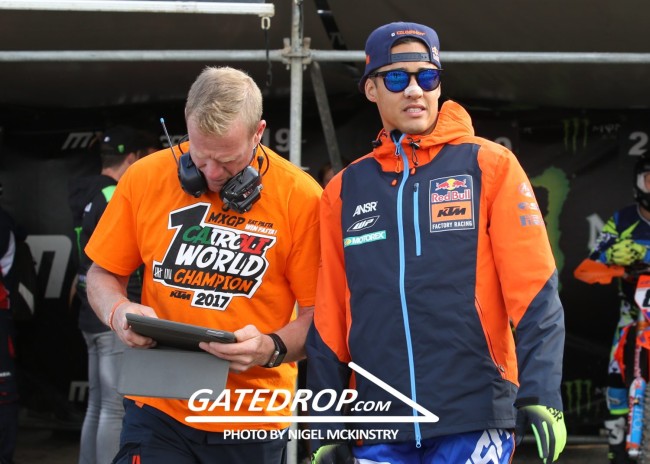 Five-time world champion Joel Smets knows all about winning, and his role with KTM means he is getting to experience the feeling again as he looks after the successful MX2 team as well as Jeffrey Herlings in MXGP.

We caught up with an exuberant Smets, who was celebrating Cairoli and KTM’s 2017 MXGP triumph, to get his thoughts on Assen MX2 winner and teenage talent, Jorge Prado, plus the MX2 championship leader Pauls Jonass, as well as his thoughts on Jeffrey Herlings’ winning streak.

Jorge Prado won today, it looked like Pauls Jonass was going to win the championship, but didn’t quite make it, what are your thoughts on today?

Jorge I am not surprised, he is an extreme talent and he is doing well, so he didn’t surprise me at all. With Pauls we can see that the pressure of the championship is a bit of a load on his shoulder. Sometime he does really well and sometimes it catches up on him and loses 20% of his potential but okay, we have a big lead so it was good – we can have a party next week also!

Yeah exactly, he has grown older too, he has learned from his mistakes and he is quite an intelligent guy so he learns from his mistakes. He knows he has to limit the damage on his weak day and that’s exactly what he did. That brings consistency and consistency brings championships.

On Jorge, obviously Herlings and Roczen were the ultimate teenage prodigies, how do you compare Jorge to them? It is an exciting talent for KTM to have!

On the talent side, riding skills, I consider him on the level of Roczen, Herlings and Cairoli. But on the sportsman, physical side he is still a bit off because he has never been a professional yet. He is 16 and always been going to school, so you cannot expect that kid to be on the same level as Herlings or Roczen at 16 because at that age these guys were already professional for a couple of years. We need to give him a bit more time but next year is a good bet for the championship.

Prado and Jonass are getting close on the track, how are you going to manage their rivalry next season?!

They are going to push each other to the next level – and they’re are going to finish 1-2! Who is going to first and who is going to be second, they have to fight it out between them. They are racers, how can you manage that? Well they have to understand they can fight hard, but it has to stay acceptable and it has to stay safe, we can’t have our own team riders taking each other out, we don’t even want them to take other riders out. We are not racing to take people out, we are racing to see the strongest and the fittest win but between teammate, yeah, it can heat up even more. You are eating around the same dinner table and that is not easy when you are fighting for the same target.

Just on Jeffrey, what are your thoughts on his speed and his wins in America?

For me that is not a big surprise, we knew that is the level he can get. He spent a lot of years in MX2 and it took him some time to adapt and find the right set-up and stuff like that and that injury, otherwise I think he could have played for the championship straight away but because of the injury, the best set-up and the best shape only came in the second half of the season but this is now Jeffrey’s level.

And his win in America, is that good for the world championship?

Yes, of course. But during my career and not afterwards, I don’t like to compare. Some days they are faster, some days we are faster and at the end of the day they are really top guys and our riders in Europe are as well. But is nice to go there, and if you have to race them, of course you want to beat them and that’s what Jeffrey did and that’s for sure cool!