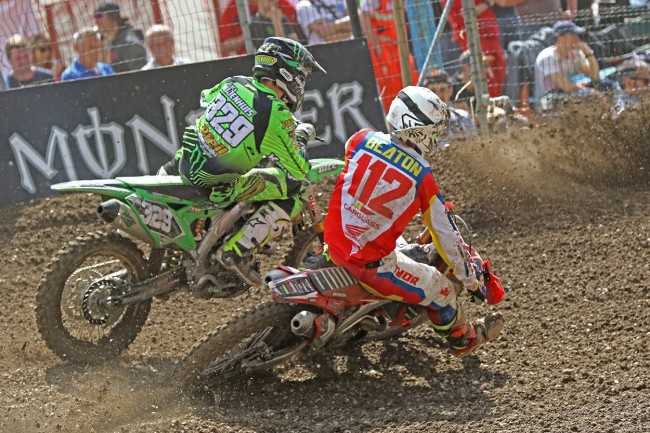 Aussie Jed Beaton has been quietly impressive this season. Good results in EMX2 and a top ten in an MX2 moto for factory Honda show the potential the young and determined Aussie has for GP racing.

Beaton has made the move from Australia to Holland all because of a childhood dream to race in the world motocross championship. The Carglass Honda rider is single-minded and a straight-talker, he knows what he wants to achieve and is determined to get there.

When your home is on the other side of the world you have to make it and despite injury, adapting to the GP scene and living in Holland, Beaton has managed to put in some very good performances, including a brilliant second place in the second EMX2 moto in Switzerland at the weekend.

We caught up with Jed this week to talk about his season, adapting to his new life in Holland and get his thoughts on his future goals in the sport.

Last weekend in Switzerland you rode superb in that second moto to take second, how would you sum the weekend up?

It was a pretty decent weekend. The first moto didn’t go to plan, I didn’t get a good start, my jump was good but I collided with another rider which made us both go to the back. I couldn’t find a rhythm with the track which gave me a little bit of arm pump. I was looking for a bit of redemption on the second day because I wasn’t pleased with my result in the first moto! I got a better start and rode my own race, it was a shame I got stuffed up by a few lappers in the last couple of laps but second is decent.

I saw Tristan Charbonneau hit your front number plate in the air as you passed him – what was going on there?

(Laughs) I haven’t a clue! I watched the replay and it was looks funny but I don’t know what it was about!

You raced two MX2 races for HRC Honda at Loket and Lommel how did you find that experience changing classes and two diverse tracks?

Yeah it was cool. The whole GP was cool, I actually enjoyed riding MX2 more because there is more bke time and you stay warm. With EMX you go out at 8am in the morning and then race at 6 at night so it’s a whole day of doing nothing really. I enjoyed riding MX2 a lot, the time on the bike and the team were really cool people, I got along with them well and it was enjoyable to be around them.

How did you find the competition? You got in the top ten in a moto – pretty good going for your first GP!

Yeah I just got two bad starts at Loket, the first moto it was sort of wet and I lost my goggles 10-15 minutes in and I think I finished 14th. The second moto the track was heaps better and I felt a lot better on the bike too and I think I got ninth so I was pretty happy with that.

The next round was Lommel, I am sure you have ridden there plenty but how was it on race day?

Race day was definitely different to practicing there! But I felt like my riding was decent it just didn’t show in the results, the moto score weren’t good so that is something I am going to work on for next year. I want to be good everywhere, that’s one goal to get better at a track like that.

On your season as a whole, how would you some up your EMX2 season, obviously the injury didn’t help things, but also coming from Australia and living in Holland?

It’s been good, I’ve definitely learnt a lot. I have been riding sand flat out, living in Holland there is nothing else to ride! It’s been a little difficult at times, some things have been hard to get used too, some of the culture things are completely different and all that. But I enjoy living in Holland, everyone speaks English and everyone is really nice so that’s been good.

My season so far hasn’t been too bad. That injury (broken collarbone) I missed two round and that hindered my results a little bit because I think I was fairly up there in points until then. If I had of been consistent all year, I had a fair few bad races to start with, like I said, everything was sort of different. but I am enjoying it now and I’m starting to find my groove and see where I fit in, it’s definitely a lot easier.

Your countryman Hunter Lawrence made the move to MX2 this year from EMX2 and had some very good results, I know he is a rival but is that confidence booster for you to see what you can do next year, especially now you have raced the class yourself?

He’s a rival but not just because he is from Australia. I am looking forward to stepping up to MX2 as well and seeing what I can do on the tracks, have a learning year, get some decent results and line myself up with something good.

Have you anything on the horizon for MX2 next season?

To be honest I haven’t a clue at the moment! That’s where I want to be so I have to sort something out, I think MX2 is what is best for myself so I have to try and find a sport somewhere in that class. But as of right now I don’t know where I will slot in.

There were a lot of Aussies in the GP scene this year but Caleb Ward and Jay Wilson have headed back home for various reasons, was that ever a temptation for you? It can’t be easy for a guy from the other side of the world coming to live in Belgium or Holland.

Yeah Jay had a kid and stuff so he went home for that reason and I think he feels more comfortable at home, I’m not sure why Caleb went home to be honest. But that’s never crossed my mind to go home, It’s always been my dream to be over here since I was a little kid, so now I’m here there is no point going home! I want to stay for as long as I can and do the best I can. At home there is only a couple of good guys and the definitely the racing career is either here or America. But no I don’t think about going home at all.

Do you ever think about going to America at all? We saw Dean Ferris do pretty good in a one-off attempt this year and Zach Osborne is showing how his GP experience can work going back over there and I guess the living style in America is more similar to Australia?

Not so much. I really enjoy it here and if I can get a good MX1 ride here and see how we go. I do like supercross but I am not a massive fan I really like motocross. I think here I can really learn a lot and always be progressing here, I am happy where I am!

Are you going to get time to go back to Australia this winter or will you stick it out in the cold of Holland!?

It depends on what happens next year, if I get something sorted I will probably stay. I will maybe go home for a little bit, but it’s a long way away and it’s pretty expensive, so we will have to see.