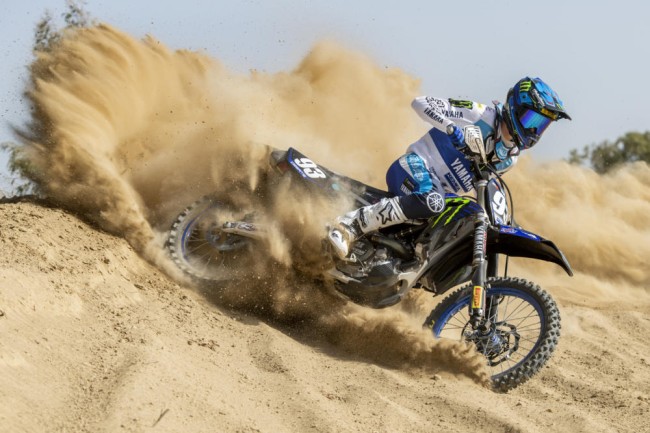 One of the pre-season title favourites, Jago Geerts, gives the latest on his knee and his thoughts on the 2021 MX2 world championship series that begins this Sunday in Russia.

You finished third in 2019, second in 2020. That means…
“… first in 2021? I wish it was as simple like that (laughs). Of course it is my goal to get the world title. That was already my goal last year. The knee injury (which he picked up in Ernée last Sunday) doesn’t make the job easier, of course. To be honest, I don’t want to think too much about the title now. We will see what will happen in the first rounds of the world championship.”

Talking about your knee, how do you feel?
“I’m doing fine. Not top, but fine. There’s a lot of improvement compared to the beginning of the week. It was a busy week with many visits to my physiotherapist and going for laser therapy. With only one goal in mind: make the knee as strong as possible. How strong? We will see on Sunday during the first free practice.”

What about the track in Orlyonok. Does it suit your style?
“Absolutely. It’s a great track. Beautiful layout, some nice jumps and fast, but technical. I have some good memories of Orlyonok. Back in 2016 I clinched the junior world title 125 on this track. A memorable race. And two years ago I was on the box in MX2 at the GP of Russia. Yeah, I really like to race there.”

Who do you consider as your main rival for the title?
“A lot of people talk about a battle between Vialle and me. But I see more contenders. Guadagnini is strong for example. Fernandez is fast. And don’t forget my two teammates. Renaux was third in the championship last season and Benistant enters the class as European champion 250. Tough competitors.”

You’re not the only Belgian chasing success in Russia this weekend. The Red Devils will start their EURO 2020-campaign in Sint-Petersburg.
“Really? I knew that the European championship starts, but didn’t know that the first game was against Russia. To be honest: I’m not really into football. I prefer cycling. I love watching the Tour de France or the Giro d’Italia on television. Much more than football. But of course I hope the Red Devils will start EURO 2020 with a win.”

You changed number. It’s no longer #193, but #93. Why?
“I used to ride with #93 when I was younger. When I made the step to the world championship MX2 in 2018 that number wasn’t available. Jonathan Bengtsson was riding with #93, so I added the 1 to get #193. When Bengtsson decided to stop racing last winter, I immediately contacted him to release that number. And he did. Finally, I’m back with my good old #93.”