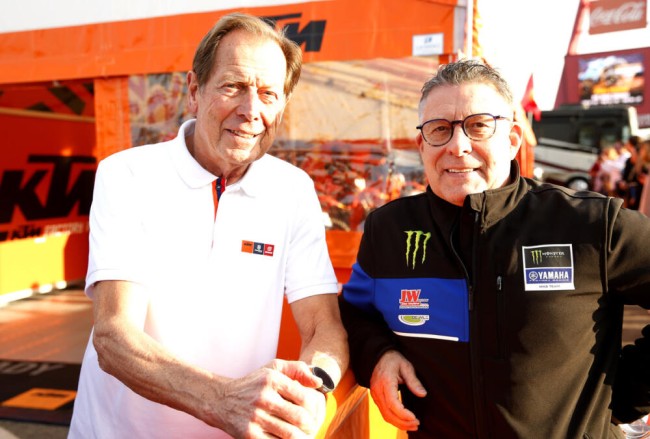 After Maxime Renaux clinched the 2021 MX2 World Championship, Factory Yamaha MX2 owner, Hans Corvers will be hoping to clinch the title yet again with Jago Geerts in the championship chase. It’s an intense battle between Geerts and Vialle with only four points between the pair after twelve rounds of the series.

MXMag caught up with Corvers to discuss the season so far.

Jago is riding his best season so far. He really has a chance to win the title this year. What is the big difference with the Jago from the previous years?

Hans Corvers: Jago has prepared in a different way. He has become more open in certain things and that has its effect. With riding and also as a person he has changed. We went to the USA at the beginning of the year and that was on our own request. That has caused a complete turnaround. Jago is now mentally stronger, shows character and is hard on himself. He can also take a lot of pain because his pain threshold is very high. He has really improved this winter and you are starting to see that. He still makes mistakes but this has decreased a lot. He can also take his time and organize it better.

What specifically has he changed in his preparation for a new season?

Hans Corvers: Jago was used to the guidance of Motorsport Vlaanderen and he got a big blow when Dirk Geukens sadly passed away. He then continued with Pierre Schroyen with whom he still works. In the off-season, he also started working with another doctor and that collaboration goes well. He also works with someone who talks some sense into him and the combination of all this works fine for Jago. Of course, he’s also had some bad luck this season. A few things have happened that shouldn’t have happened and that Jago wasn’t to blame for. It has cost him some points though.

Jago Geerts and Tom Vialle are riding at a very high level. Both riders have to deal with small problems but it looks like it will be these two who will ride for the title, right?

Hans Corvers: From the start of the season until three weeks ago, it was between Geerts and Vialle, but now that has changed. One more rider has joined and he is growing week by week. I think he’s going to seriously interfere in the battles.

That rider is of course Thibault Benistant. Did the fact that he ignored team orders cause any resentment within the team?

Hans Corvers: No, it hasn’t caused any resentment. You have to see it like this: the riders are the same, they have the same engines, which are tuned differently, but the material is identical. The same amount of effort is put in for both riders. Now, Thibault is coming back from an injury and you could assume that if there is no need to fight for a title he could ride for Jago. But it’s not as simple as that because he wants to fulfil his contract and improve and for that you need performance. To deny yourself a podium place in your own country under those circumstances is obviously difficult. As far as that’s concerned, we never made an agreement beforehand. Also now we have agreed that everyone can ride for themselves. They have to ride fairly. We did say to Thibault that if Jago is faster it doesn’t work to block an attack corner after corner. Let Jago pass a bit faster than you normally would. So there are clearly no team orders but whether it will stay that way is of course is another matter. At the moment Jago and Thibault can ride for what they are worth.

Do you see a scenario with two super strong riders in one team that could play into the hands of Jago Geerts while Tom Vialle has nobody to support him?

Hans Corvers: I want to be careful in my statements but I think if it comes down to a few points at the end of the season that it’s only natural that Benistant won’t make a fuss then. The next five or six GPs the guys obviously have to do their thing. It’s an individual sport and it’s every man for himself. You also have to see it that in normal circumstances without orders Thibault can also take points away from Vialle. Jago is strong but if he wants to be world champion he has to pass Thibault, period!

The riders who are competing for the title in the MX2 class this year are out of contract. To what extent does that fact affect how the team and riders work among themselves?

Hans Corvers: I don’t think that plays much of a role. There are a lot of things that have an influence. The rider has to feel good on the bike and has to feel at home in the team. Jago has been with the team for five years now and knows the ins and outs. He is going to ride MX2 again anyway, that has already been decided but whether he does that with us or in the “orange team” is not a deciding factor. I think the thinking goes more to the years after that because he’s signing a two-year contract for one year of MX2 and one year of MXGP. Does he fit into the KTM Factory system or does he fit into Louis Vosters’ Yamaha Factory Team?

How different is it for you after years of building a team and many victories to be able to go for a world title again?

Hans Corvers: Of course it’s a very good feeling, I can’t hide that. We are starting to notice that our success is not always appreciated by everyone. All in all, it’s a great feeling and the team is highly motivated by its success. The last three years we have been competing for the marbles and the future looks good.